What is Goalball? How does Goalball work? Get ready to learn about Goalball and discover how to be a fan, player, or coach. Start your journey to understanding Goalball here. 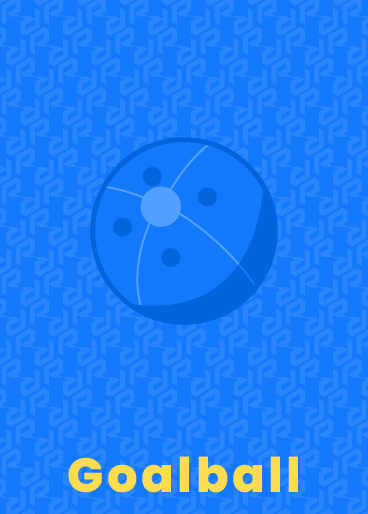 Goalball is a sport that is played by those with a vision impairment. It is a team game with 6 players involved in the game total, 3 per team. It is normally played on a volleyball court that has a goal played across the entire end of each side. The ball must be thrown, no kick is allowed, and the objective is to score in the opposing team's net as well as defend your own net from the opponent. Several rules are put in place to create fairness including one such as defenders must keep at least part of their body in the "team area" or else it is deemed a penalty. The ball has a noise creator in it that is audible for all players to hear as they have visual impairments as well as wear eye masks to maintain fairness during the game.

The sport was originally created back in the aftermath of World War II as a way for individuals to recover from war wounds. It is a sanctioned Paralympic sport and first was in the Paralympic games in 1976 following a successful test trial in the 1972 games. At each Paralympic Games, 12 Men's and 10 Women's teams from across the globe compete in this sport. This sport is unique in that only those with visual impairments are allowed to compete at the global stage and the game was specifically created for these individuals to play. There are few sports that tailor directly to this audience and few that can be easily played by this audience which creates an exciting activity for all and these people especially.

Pages Related to What is Goalball?