What are the rules of goalball? 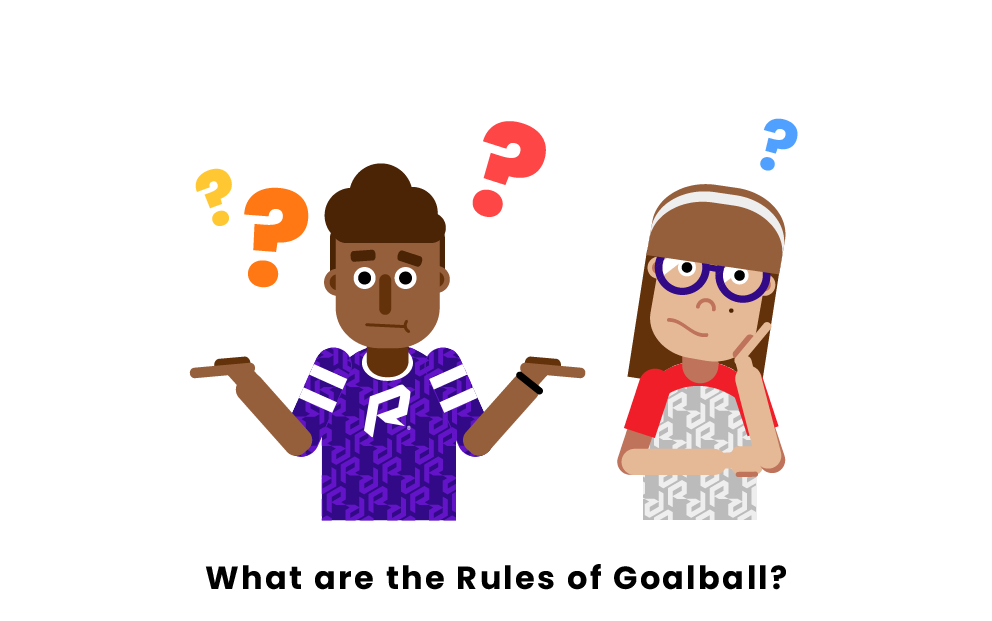 Goalball is a sport primarily for blind and visually impaired players that involves rolling the ball into the opponent’s goal.

The object of goalball is to score more goals than the opposing team.

The Players and Court

In each game of goalball, there are two teams of three players. All players are required to wear blacked-out eye shades so that the level of visibility is the same for each player. Additionally, in major competitions, players are also required to wear dark eye patches over their eyes along with the goggles to make sure that they have no visibility.

Goalball takes place on a court with a width of 9 meters and length of 18 meters. On the court, string lines are taped down for the players to feel and help with their orientation of the floor. At each end of the floor is a player zone with three lines including two wings and one center line. In addition to the player zones, there are two highball lines located three meters out from the player zones along with a center line.

Each goalball game consists of two 12 minute halves. Throughout the game, players on each team roll the ball from inside their respective zones toward the opposing team’s goal. For the safety of the players, the ball must be rolled along the ground instead of thrown through the air. The defending team attempts to defend their goal by blocking the ball with their bodies. Each ball is filled with bells so that defenders can locate it as it approaches them. Unlike many other sports, crowd noise is prohibited for goalball games so that players can hear the bells on the ball. Once a shot is blocked, the other team gains possession of the ball and tries to score.

The three main positions in goalball include center, right wing, and left wing. The center, who plays in the middle of the zone, is the main defensive player of the team. They usually position themselves near the front of the player zone and are responsible for defending most of the court. The wing players are the main offensive players of the team and do most of the throwing. Although focused on scoring, the wing players also play defense behind the center on each side of the court. After the center stops a shot from the other team, they will usually pass the ball to one of the wings to shoot and will get back into their defensive position.

When playing goalball, there are a few ways to lose possession of the ball including a premature throw, a ball over, and a pass out. A premature throw occurs when a player throws the ball earlier than they are allowed to. This may be before the beginning of the game or after a penalty before play resumes. Another way to lose the ball is through a ball over. This is when a defender blocks a shot but the ball rolls over the center line back to the other side of the court. The final way to lose possession is a pass out, which is when a player attempts to pass the ball to a teammate but the ball goes out of bounds.

In goalball, there are a few different types of shots that players execute. One shot that many players attempt is the quick throw. A quick throw is done when a defense stops a shot and immediately shoots the ball back down the court in hopes that the players from the other team are not back in their defensive positions. To throw off a defense, players may also attempt other shots that differ in direction and velocity such as curve balls and off speed balls.

When shooting the ball, players have a 10 second shot clock that they must roll the ball within for it to count. As the ball travels down the court, it must bounce at least once before crossing the highball line or else a high ball penalty is called and the thrower must defend against a penalty shot. If the ball passes successfully over the other team’s goal line and into the goal, the offensive team is awarded one point. If the score ends up tied at the end of the game, an overtime period will occur followed by a shootout if the score is still even.

What is illegal defense in goalball?

What is the difference between a short and long ball?

When shooting in goalball, players can be penalized for short and long balls. A short ball occurs when a player rolls the ball across the court but it stops short of the opposing team’s area. On the other hand, a long ball is when a player throws the ball and it fails to bounce at least once in the neutral area on the court. For both of these cases, penalties are called and the thrower will defend against a penalty shot.

Can players be penalized for touching their eyeshades?

Pages Related to What are the rules of goalball?