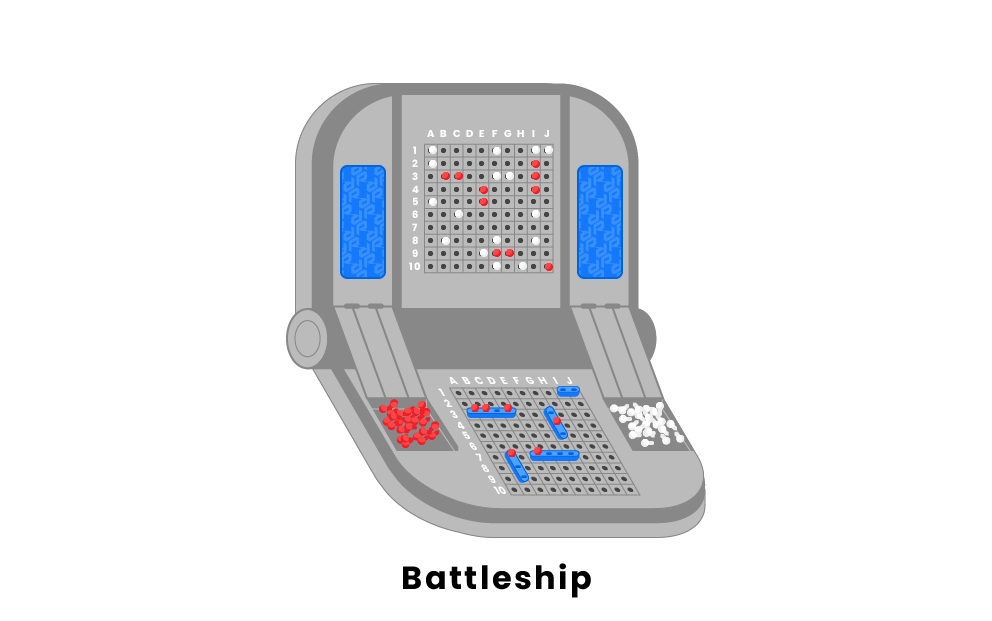 Battleship is a board game played by two people.

Each player has a game unit with a target grid and an ocean grid, five plastic ships, and a large number of red and white pegs.

The two grids are marked with numbers and letters.

The letters A-J are marked across the top of the grid, and the numbers 1-10 are marked down the side.

Each player has five ships with a different number of holes in them: one carrier (5 holes), one battleship (4 holes), one destroyer (3 holes), one submarine (3 holes), and one patrol boat (2 holes).

To begin, each player sets up their game unit so that the other player cannot see their grid.

Next, set up your boats on the grid, placing them either horizontally or vertically (not diagonally!)

Your boats cannot overlap on the same square.

Once both players have placed their fleets, the game begins.

Whoever goes first calls out a spot on the grid, using the number and letter that intersect on the square they choose (for example: A6, C9, F4).

When the player calls out a square, their opponent must look to see if that square has one of their ships in it.

If there is no ship in the square, the opponent says, “Miss,” and the caller places a white peg in that spot on their target grid.

Using white pegs helps you see where your enemy’s ships are not located, so you can guess better as the game goes on.

If a called square does have a ship in it, the opponent says, “Hit,” as well as which ship was hit, and both players place a red peg on their grids in that square.

If all of the holes of a ship are hit, the ship is sunk and is removed from the board.

The first player to sink all of their opponent’s ships wins!