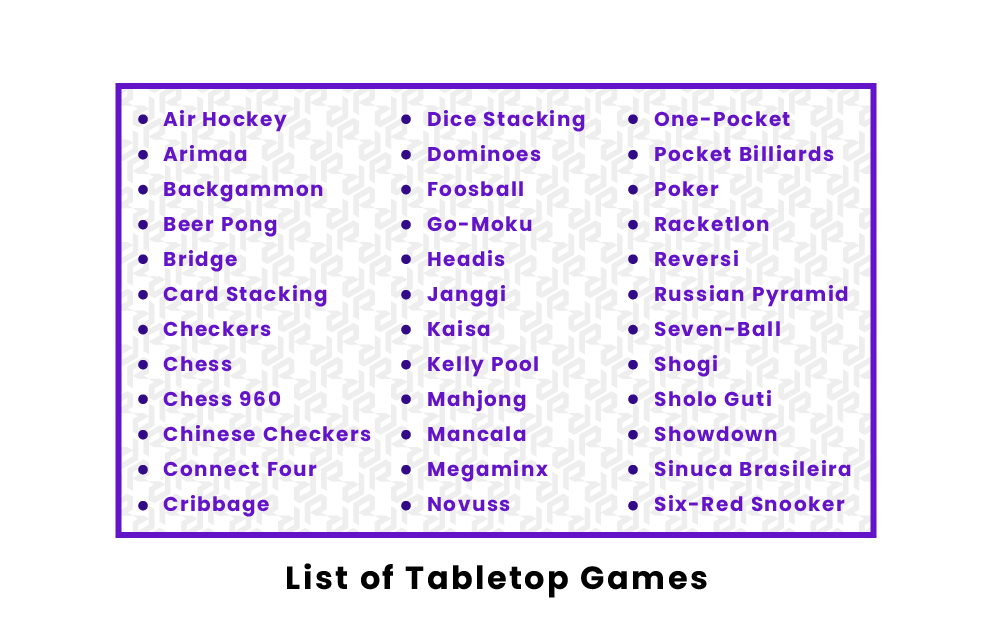 Tabletop games are games that are played on a table or other flat surfaces and typically involve the use of game pieces, dice, cards, or other accessories. Tabletop games have been played by many cultures throughout history, and there are many different types of tabletop games, almost all having unique objectives. Some, like arm wrestling, are tests of strength, while others are games of strategy, skill, and accuracy. Many tabletop games also mimic sports, such as foosball, which is based on soccer, air hockey, and table tennis.

Most tabletop games require at least two players, but many are structured to be played by multiple people, and others can be played individually. Many tabletop games, such as poker and other card games, are often a source of gambling, where players will bet money over the outcome of the game, with the winner receiving all of the money that was wagered.

What are tabletop games?

Tabletop games are games played on a table or other flat surface, either individually or as a group. Most tabletop games make use of various accessories, such as game pieces, cards, dice, or boards. Some, like air hockey and table tennis, are based on other sports, while others can involve gambling and betting money. Many types of tabletop games are played across different cultures.

What are the most popular tabletop games?

Some of the most popular tabletop games are chess, checkers, and backgammon, all of which are board games. Checkers, or draughts, is the oldest of the three, dating back to 3000 BCE. It involves two players moving their pieces across a board and jumping over the other player’s pieces in order to remove them. Chess, an evolution of checkers, was developed around 1200 CE and uses multiple pieces that can move across the board in various ways. Backgammon, which is nearly as old as checkers, uses dice in order to determine the moving of pieces.

What are the best tabletop games to play alone?

Many tabletop games can be played alone, such as card stacking and dominoes. Card stacking involves arranging a deck of cards in a certain shape, stacking them delicately on top of each other in order to make structures, such as a house of cards. Dominoes is a game that uses marked pieces called dominoes, which can be arranged in various patterns. Other types of card games, such as solitaire, emperor, and devil’s grip, can also be played alone.

What are the best tabletop games to play with more than two people?

Some of the best tabletop games to play in groups include bridge, poker, and mahjong. Bridge is a card game in which four players attempt to score points by making bids, or defeating their opponents’ bids, to earn points. Poker, another card game, involves dealing cards and making bets based on the groupings of cards each player has. Mahjong is a tile game in which four players remove tiles from a group by matching together two tiles with identical images on them.