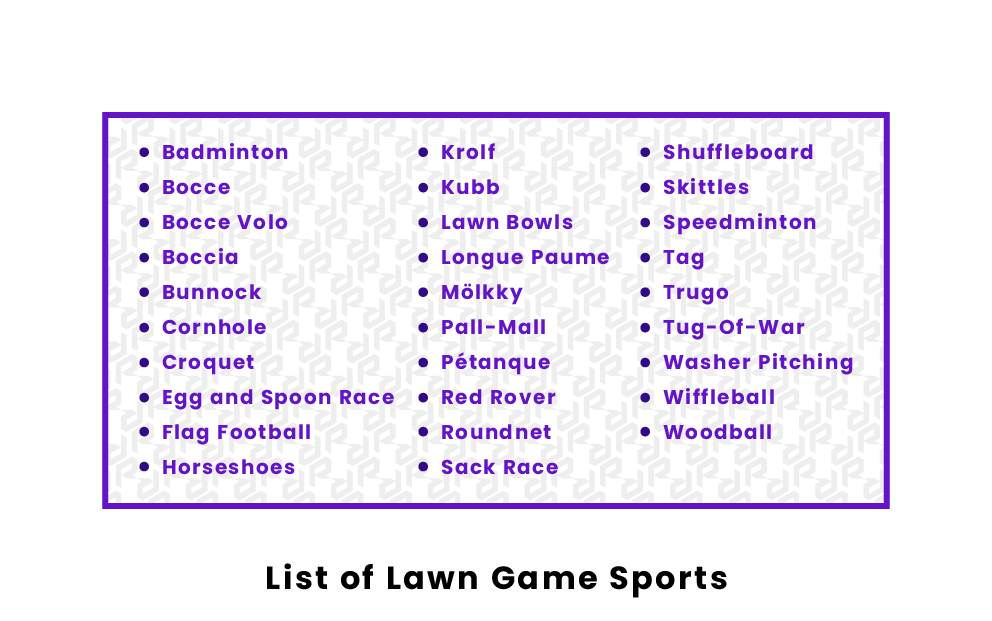 Lawn games are games played on a lawn or other large stretch of grass, which are often intended to be played by multiple people. Lawn games are popular family activities commonly played during barbeques, picnics, and other outdoor gatherings. There are dozens of different types of lawn games, and each has its own unique rules, equipment, and objectives. Some lawn games are games of accuracy, such as bocce and cornhole, while others are tests of teamwork, such as badminton, sack racing, and capture the flag. Other lawn games test strength or balance, such as tug-of-war and the egg and spoon race.

Many lawn games are cultural in nature, deriving from various countries around the world. For example, the game of bocce is Italian in origin, while its other variations come from different countries, such as the French version pétanque. These lawn games have a long history and have provided a great source of entertainment to groups of people for many years.

What are lawn games?

Lawn games are games played on a long stretch of grass, often by multiple players. There are various types of lawn games, and many are cultural games originating from different countries across the world. Various equipment is required for different types of lawn games, but most do not need much to be played. Lawn games are popular for family gatherings and often allow people of various ages to come together to enjoy a fun game that builds bonds of family and friendship.

What are the most popular lawn games?

Some of the most popular lawn games include croquet, tug-of-war, capture the flag, and lawn bowls. Croquet, also known as pall-mall, is a popular English game using balls and mallets, which was played by many noblemen, including kings. Tug-of-war is a classic strength sport in which two opposing teams pull on opposite ends of a thick rope, trying to unbalance the other. Capture the flag, which is thought to have roots in the American Civil War, is a game where two teams attempt to capture the other’s flag and return it to their own side without being caught. Finally, lawn bowls is a classic game where players attempt to throw balls close to a target, seeing who can get their ball the closest.

Which lawn games are best for kids?

Many lawn games are great for young children to play. Most lawn games are simple and easy to learn, and are not at all dangerous for young children. For example, cornhole is a popular and fun childhood game where players attempt to toss small bags filled with corn kernels through a hole in a wooden board. Wiffle ball is another popular lawn sport that children can play, as it is similar to baseball but involves less dangerous equipment that is easy for children to use.

What is the oldest lawn game?

The oldest known lawn game is lawn bowls, also known as bocce, pétanque, or simply bowls. The objective of lawn bowls is for players to roll their balls towards a smaller target ball to see who can get their ball closest to the target. Lawn bowls is a very old game, and evidence of it dates all the way back to ancient cultures, such as Ancient Egypt and Greece. Many variations on the game exist, all from different countries, such as Italy, France, Venezuela, and Finland.