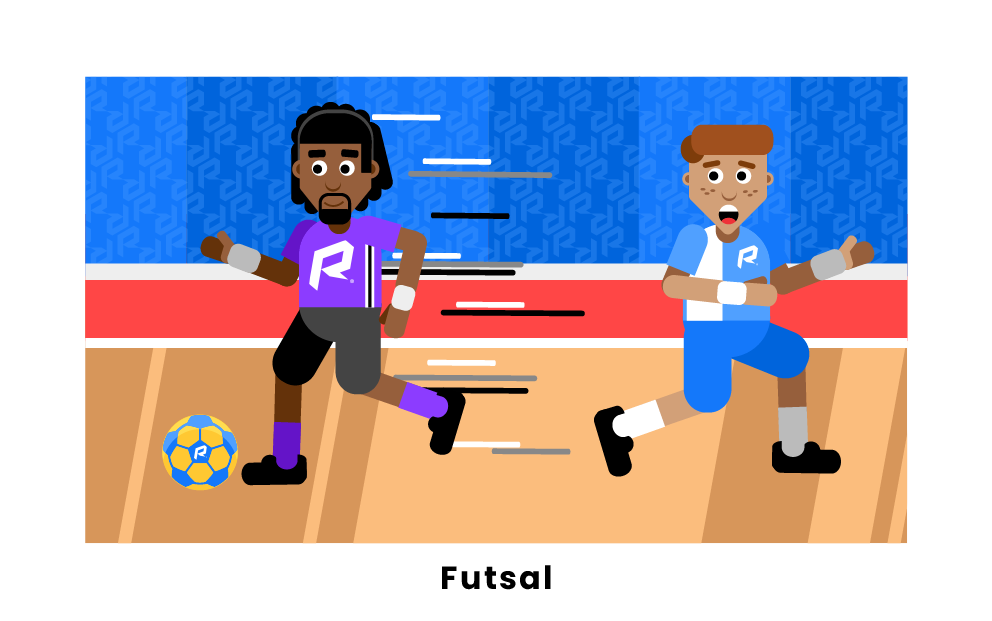 Futsal as a sport is very similar to soccer, but played on a smaller level of 5-a-side (including a goalkeeper who can use their hands) instead of 11 v 11. The pace of the game is much faster and it requires very fine ball control. With the quickness of the game comes many passes and fancy skills which you probably won't see in a regular soccer match. However, futsal still has the same objective as soccer: scoring more goals than the other team.

Since futsal is similar to soccer, but a little more technical, it can be very useful for the development of one's play in real soccer. In many instances, it is actually where some famous soccer players began their careers such as some world's best like Cristiano Ronaldo, Ronadinho, Neymar, and many more.

Futsal, professionally played on a hard floor court can also be played almost anywhere: a beach, a field, or even a street. A professional futsal court ranges in size from 125 to 138 feet in length and 66 to 82 feet in width. All you need is a futsal ball which is a size 4 instead of the size 5 soccer ball. Since it is played on a hard surface, you must not use cleats, but flat futsal shoes. Professional futsal goals are sized with 9.8 feet between the posts and 6.5 feet from the lower edge of the crossbar to the ground. Lastly, you will need 10 people to have a full game of 5-a-side.

Does futsal have goalkeepers?

Yes, futsal does in fact have goalkeepers. A futsal goalkeeper's rules and limits are slightly different than that of normal soccer. Some of the rules include that they can only have the ball at their feet in their own half for no more than four seconds. However, they can dribble the ball up the court and in fact score a goal like any other player.

Though just like any great debate about who's better than who, this is arguably one of the most difficult to choose. The main debate lies between two amazing players: Falcao and Ricardinho. Falcao is Brazilian, and Ricardinho is Portuguese, and both have played at the highest levels of futsal and achieved great titles. However, having won the FIFA Futsal World Cup twice, Falcao is often considered the greatest of all time.

Does futsal have an offside rule?

A major rule in futsal is that there is no offside. Unlike outdoor soccer on a large field, futsal is played on a much smaller scale. Attacking players can indeed be as close to the goal as they want to be. However, it can be quite disadvantageous to do this because it will always leave the defense in smaller numbers. A benefit of the rule is that it can be useful for counter-attacking.

Where did futsal come from and where is it played today?

Futsal originated from Montevideo, Uruguay in 1930. It started just as 5-a-side for youth competition and through the years it rapidly spread through South America and even the world. However, even to this day Futsal is still most famously played in Brazil. Futsal is often considered as one the reasons that Brazil produces so many superstar players for soccer. Their style of play that they are known for is commonly credited to futsal.

What international competitions does futsal have?

Pages Related to What is Futsal?