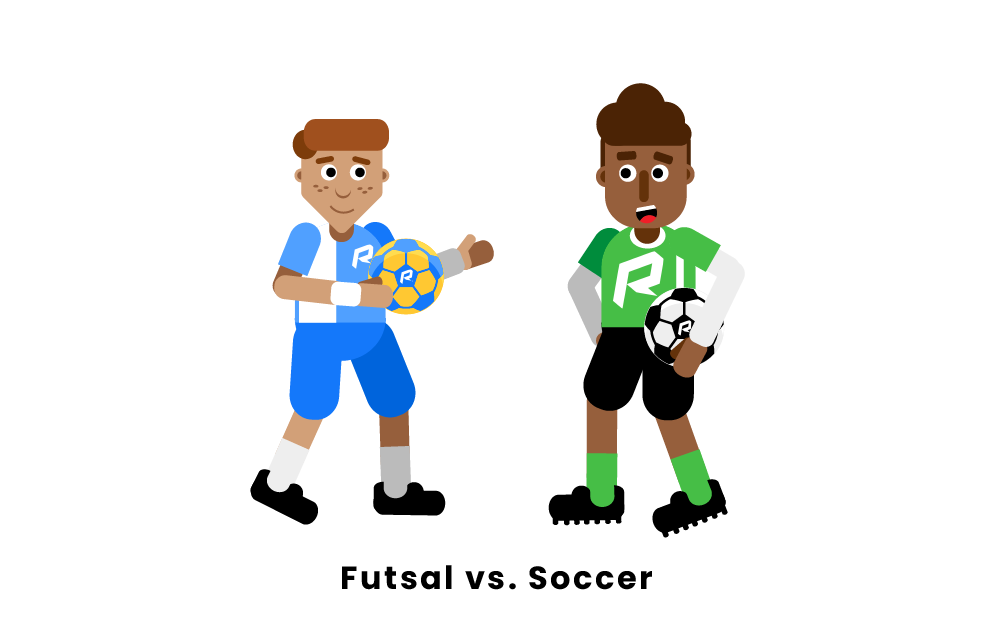 What Are The Differences Between Soccer And Futsal?

These are the differences between soccer and futsal:

Unlike soccer, which is played on a grass or turf field, futsal is played indoors. In addition, the pitch is not made of grass but instead is a hard surface. The pitch is still constrained by lines, however, just like in an outdoor soccer field.

Soccer fields are 75 yards by 120 yards. In futsal, the court is much smaller. In a standard futsal match, the court is 42 meters by 25 meters. As a result, the pace of play in a futsal match is much faster because there is less space from end line to end line.

To match the smaller court size, futsal goals are also much smaller than soccer goals. A standard futsal goal only measures 2m high by 3m wide. In soccer, the goals are 2.4m high by 7.3m wide. The smaller goal in futsal can make scoring goals more difficult, as the goalkeeper can easily reach every part of the goal.

In a soccer match, the size of the ball is a standard Size 5 ball. In addition, the ball in soccer is made to bounce on surfaces. However, a futsal ball is a smaller ball, usually Size 4, and is more dense. Therefore, the ball does not bounce on the futsal court.

Unlike soccer, a futsal game has unlimited substitutions. While in soccer, there is a limit of three to five subs depending on the league, in futsal, there are no limits. Players can be subbed on and off, so long as they do so from the designated substitution zone and do not exceed five players on the court.

Since there is a smaller pitch, the number of players from each team during a futsal game is much smaller. Instead of your typical 11-on-11 soccer match, futsal only includes five players on each side, including the goalkeeper.

7. Half Length and Stopped Clock

The halves in a typical soccer match are 45 minutes each, with stoppage time included at the end. However, in a futsal match, the halves are just under half the amount of those in a soccer match. Each half in a futsal game is 20 minutes long. In addition, the clock stops whenever the ball is out of play, which means that there is no stoppage time included at the conclusion of the match.

In a soccer match, when the ball goes out of play, the team in possession gets to throw in the ball. However, in futsal, there are no throw-ins. Instead, players kick in the ball. This makes the pace of play much faster than your average soccer match.

In soccer, offside is a standard rule that helps the defending team protect their goal from attackers. However, because the pitch in futsal is so small, there is no offside rule. As a result, attackers in futsal can get as close to the goal as they would like, and this often results in more goal-scoring opportunities than are typically seen in soccer.

In futsal, players cannot take their time when putting the ball back into play. Instead, they have a limited amount of time before they are called out. In a typical futsal match, players have four seconds to get rid of the ball and put it into play. This is not something seen in soccer and helps keep the pace of the game quicker.

Pages Related to Futsal VS Soccer