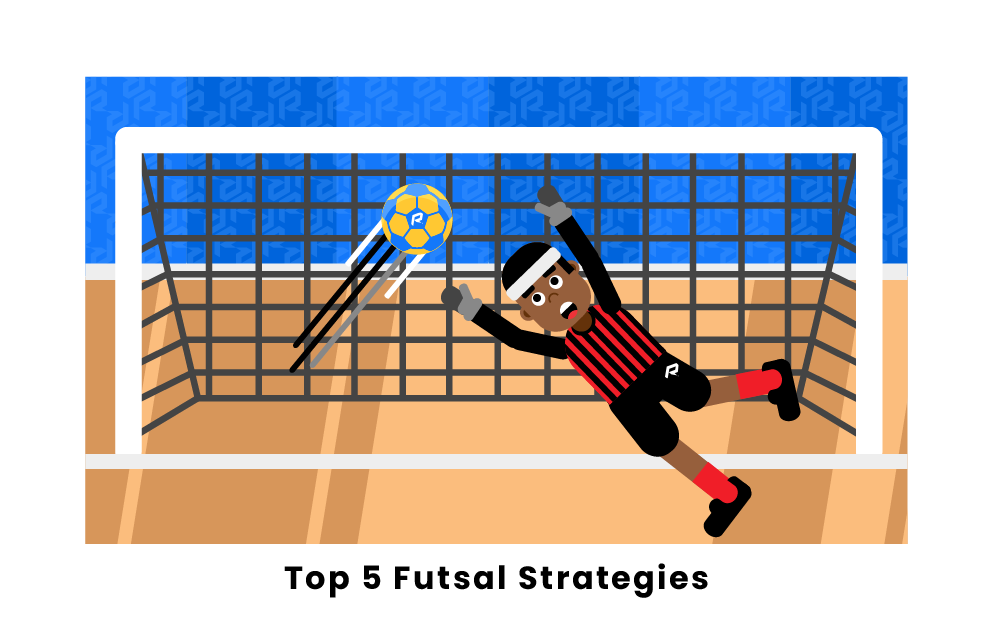 What important tactics do players use to win a futsal game?

Even for experienced soccer players, the futsal court is an adjustment. In this indoor sport the playing field is smaller, as is the ball and size of the teams. This calls for a greater sense of control in one’s possession of the ball, as well as when passing and shooting. Large punts and sweeping kicks are unnecessary in this game, resulting in out of bound calls or a teammate struggling to control the incoming ball. Having control over one’s shots and passes means less interception from the opposing team, and a better opportunity for your teammate to gain control of the ball.

Good passing between teammates is essential to a winning futsal game.

While not an official rule, many teams use a strategy called the 5 pass rule, which means that the ball should be passed 5 times between a team consecutively, before someone takes a shot. The mentality behind this strategy is that the successive passing confuses the opposing team. Futsal is about quick reactions, and using this to one’s advantage with some poker faces tricks the other team on the directionality of where the ball will be passed. By separating your sight line from where you pass, you keep the opposition on their toes with the element of surprise.

It is important to stick to one’s given role on the playing field. Like a clock, each technical role must be played with precision and accuracy. With only 5 players from each team on the field at all times, one of these being the goalkeeper, there is not much space for improvisation when it comes to team roles. Deciding on a formation for offense, defense, and mid-fielders leads to less energy being expended on players running up and down the field aimlessly. With a strong formation, all bases can be covered at all times.

Constant movement is key in futsal. It is natural to assume the player in possession of the ball will be moving the most, but it is important to spread out and cover the field when your teammate has the ball so that they have options to pass. Whether offensive or defensive, players must be ready at all times to accept passes or assists thrown their way.  Giving your teammates options when it comes to the way they move up and down the field gives more opportunity to score a goal. In futsal each player has far more contact with the ball than in soccer. Letting teamwork score a goal rather than singular performances is what will win teams the game.

5. Attack and Defend at All Times

With only 4 outfield players on the court from each team, having players who are attacking and defending at all times is essential. It is important to have at least one strong offensive player who is able to take pressure off of the side of the defense. Having a trusted defender ensures that the goalkeeper’s area is never unprotected and doesn’t leave open areas for the opposing team to take a shot. A rule of thumb for when the opposition has the ball is to never be behind them when they run down the field. This way, you are creating a defense between them and your goal, putting pressure on them and not giving them easy access to a shot in the defensive zone.

Is there a limit to subbing out in futsal?

There is no limit to subbing in futsal. With only 5 players from each team on the court at a time, subbing is a useful strategy which is able to keep high energy players on the field at all times. With an only 40 minute run time, it is important for teams to utilize their substitutions. Coaches are able to call for a sub at any time during the game.

What season is futsal played?

Futsal tends to take place in the winter, as soccer seasons are usually during the spring and fall seasons. However, depending on the league, it can be played during any season. Professional players usually play one season of soccer a year which ranges from late summer to mid spring. This makes futsal an ideal sport for keeping one's ball skills sharp during a rest season. Because it is indoors, and usually played in a gym or on a basketball court, it is an all weather game.

Where did futsal originate?

Futsal originated in Uruguay in 1930, when a man named Juan Carlos Ceriani devised a 5 on 5 soccer-like game for youths to play at the YMCA.Played on a basketball sized court, the name futsal is derived from the words “soccer” and “indoors” in Spanish. It is commonly called five-a-side or mini-soccer. The game gained popularity in South America and Brazil, and in 1981, the U.S. Futsal Federation was founded.

Futsal is a game popular with youths, as it was originally designed for youth play in a gym setting. Some of the biggest names in soccer played futsal as youths, and some of the top clubs in the world have their junior players play futsal to hone their soccer skills. To name just a few, Pele, Messi, and Ronaldo all grew up playing futsal. Futsal teaches youths from a young age to stay calm under pressure and to think tactically when moving the ball on the field.