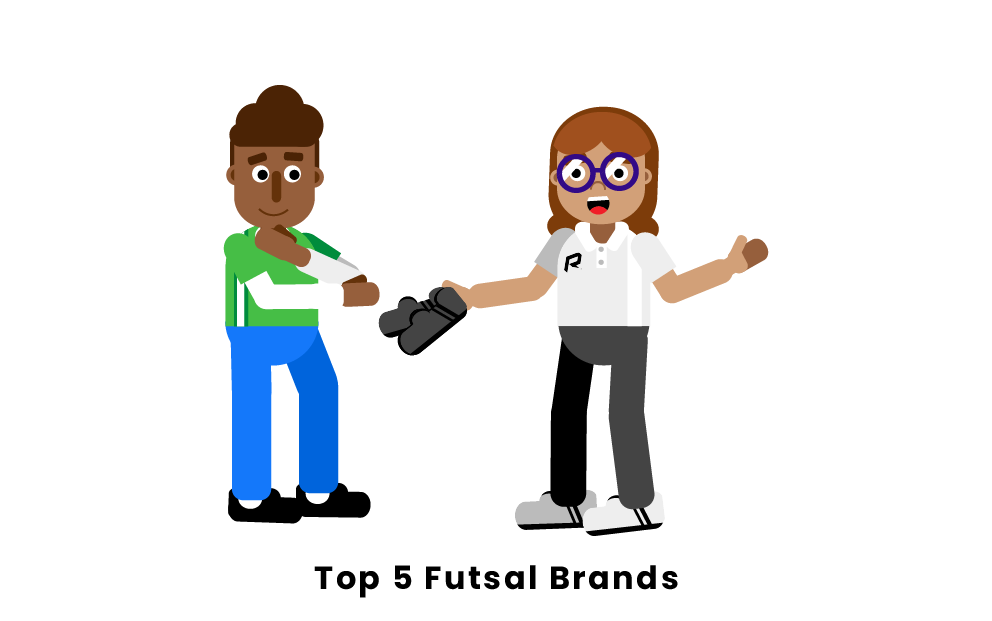 What are the most popular futsal brands?

Just like many other sports, Adidas is one of the best brands for all things futsal. From futsal boots to futsal balls, Adidas has it all. Their products are high quality and are popular among many professional futsal players.  In addition, they offer a range of different products at different price points which is perfect for anyone from players just starting out to professionals. Adidas carries just about any piece of equipment you may need. They even have a range of athletic clothes and sports backpacks that can be useful during and after futsal games and practices.

Similar to Adidas, Nike has just about anything you may need to play futsal. They have high quality futsal gear from cleats to shin guards. The brand is a great option for beginners testing out the sport as well as those on a budget. They have balls, shin guards, boots and more at a range of different price points ranging from $20 to $200+ dollars. Additionally, Nike products are easily found both online and in stores. Athletic stores like Modells and Dick’s Sporting Goods carry Nike Products. The Nike website is also a great place to look for all your futsal needs.

Umbro is known for their high quality futsal gear. More specifically, they are known for producing quality futsal boots that are used often by many professional futsal players. While they also carry other sports, their futsal boots are well known in the sports world. They also carry athletic clothes and equipment for the sport as well. A downside of Umbro is that they do not have a wide selection of different products that range in price. While Umbro is on the more expensive side compared to brands like Nike and Adidas, the quality of their gear is similar to that of other brands.

Joma is a Spanish sports company that specializes in multiple sports like football, soccer, tennis, volleyball, and futsal. Their futsal boots come in a range of bright colors and are known for their good traction on the pitch. In addition to shoes, Joma also sells other futsal gear like shin guards, goalkeeper gloves, and futsal bags. In addition to adult sizes, Joma also has a wide range of kids gear at affordable prices for those just starting out in the sport of futsal. There are many professional futsal athletes that are also sponsored by Joma, including Futsal star Eder Lima who plays for the Russian National Futsal team.

While Puma is not commonly known as a Futsal brand, they still produce high quality and affordable futsal gear for everyone of all ages. They sell everything from indoor trainers to shin guards and workout gear. In addition, they have a wide range of boots that are easily found both on their website and at sporting goods stores such as Modells and Dick’s Sporting goods. In addition to futsal gear for players, Puma also sells national team and club gear for fans of futsal in their own country and overseas. Overall, Puma is perfect for the beginner starting out and in need of quality gear that is inexpensive.

How are Futsal shoes different from soccer cleats?

Futsal shoes are different from soccer cleats in that they do not have metal or plastic spikes or studs at the bottom. In soccer, these spikes are used to keep traction and avoid slipping on the grass or turf. However, in futsal this is not needed and futsal shoes are therefore flat on the bottoms. Futsal players should avoid wearing spikes on an indoor futsal court or else it could end up in serious injury of themselves or other players.

Where can I buy Futsal shoes?

Futsal shoes are easy to find at just about any sporting goods store or website. Players can search on a sports brand website as well for Futsal boots or shoes. The good thing about futsal is that just about any flat sneaker with good traction works well for the sport. Even running shoes are a good option for those on a budget and just starting out in the sport. Just keep in mind that cleats should never be worn when playing futsal.

What are the best futsal boots for beginners?

The best boots for someone who is just starting out in the sport of futsal are flat boots with great traction. Having shoes with good traction is essential to the sport to help players avoid slipping and sliding when playing futsal. While shoes made for the sport are best and recommended, a beginner can also wear flat running sneakers as well.

How much are Futsal Shoes?

Futsal shoe prices can be bought at a wide range of price points. Sports brands like Nike and Adidas often sell shoes that can be as low as $20 to $30 dollars. However, futsal shoes can also get really expensive. For instance, professional futsal shoes can be as much as $250 to $300 dollars. Many brands carry reasonable mid range shoes at about $75 dollars as well.