Top 10 Futsal Players Of All Time 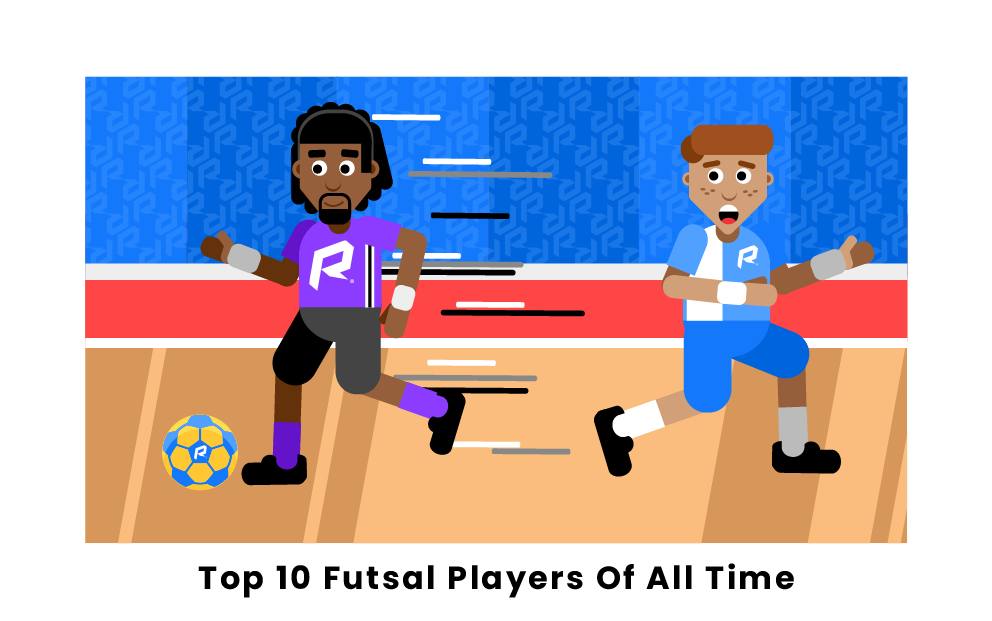 Futsal, an offshoot of soccer, has risen tremendously in popularity over the last two decades. As the sport has become more popular, players within the sport have attained legendary status amongst fans and teammates alike. Read on to learn about the top ten best futsal players of all time.

What are the best futsal players of all time?

There is not always a clear consensus on the best player in a sport, but Falcão is as close as it gets for futsal. Born Alessandro Rosa Vieira, the Brazilian “Falcão” is a futsal legend. Falcão has the most goals in men’s international futsal matches (401), most goals in FIFA Futsal World Cup matches (48), and has won the “Best Futsal Player in the World” award four times (2004, 2006, 2011, and 2012).

Falcão excelled in almost all phases of the sport. He could dribble, pass, and shoot as well as anyone. Falcão retired from futsal in 2016 after a lengthy career.

When the UMBRO Futsal Awards began giving out a “Best Player in the World” award in 2000, Manoel Tobias won it three years in a row. He also has two FIFA World Cup Golden Ball and Golden Shoe awards to his name from the 1996 and 2000 tournaments. Manoel Tobias scored 278 goals in just over 300 appearances for Brazil on the international stage before retiring in 2004.

Ricardinho, born Ricardo Filipe da Silva Braga, broke the record for number of Best Player of the World Awards won by a single player in 2018, earning his sixth. He won the award in 2010, 2014, 2015, 2016, 2017, and 2018. Ricardinho is also sometimes referred to as “O Mágico,” which translates to “the Magician,” due to his silky touch and incredible skill on the ball.

Ricardinho led Portugal to a UEFA Futsal Championship victory in 2018, the nation’s first European title in men’s futsal. Then, in 2021, he returned to futsal to lead Portugal to their first Futsal World Cup title. Ricardinho retired from international play following this victory. His professional career began in 2002, and he currently plays for ACCS in Paris.

In an attacking heavy sport like futsal, it is rare that a defender is recognized as one of the best in the game. This is not the case with Kike Boned.

Kike Boned, also known as Kike and whose full name is Enrique Boned Guillot, played as a defender for the Spanish national futsal team. Boned was named Best Futsal Player in the World in 2009 and the UEFA Futsal Championship Golden Player in 2012.

Kike helped lead Spain to two Futsal World Cups in 2000 and 2004. He has also won five UEFA Futsal Championships and is widely considered to be the greatest defender in futsal history.

Sergio Lozano, whose real name is Sergio Lozano Martinez, is a Spanish futsal player who won the Best Futsal Player in the World Award in 2013. He has helped the Spanish national team to a 2014 UEFA Futsal Championship victory and a runners-up finish at the 2012 FIFA Futsal World Cup.

Lozano began his career with Arganda in 2001 and worked his way up to traditional power Barcelona by 2012. At Barcelona, Lozano already has more than 50 goals in less than 50 appearances.

Lozano plays as an ala, or pivot, in a futsal formation. His main role is distributing quick passes and scoring goals.

Higuita was born in Brazil, but immigrated to Kazakhstan and represents the Kazakhstan national futsal team in international competitions.

Despite his position as a goalkeeper, Higuita is also known to score goals occasionally.

Flávio Sérgio Viana is a Brazilian futsal player and one of the most accomplished players in futsal history. He goes by the name “Schumacher” in honor of the legendary German soccer goalkeeper Harald Schumacher.

Schumacher won the 2008 Best Player in the World Award and was part of some legendary club and international teams.

Javi Rodriguez, whose full name is Javi Rodriguez Nebreda, is a Spanish futsal winger. Rodriguez enjoyed a long and successful career as a player (from 1991 to 2015) before becoming a professional manager in 2018.

Vladislav Nailyevich Shayakhmetov, more commonly known by his family name of Shayakhmetov, is a Russian futsal player who won the Best Futsal Player in the World award in 2007.

At 36 years old, Italian goalkeeper Stefano Mammarella’s career will be coming to an end sooner rather than later, but that doesn’t mean he hasn’t had an astonishing career.

Mammarella plays club futsal at Società Sportiva Dilettantistica Acqua e Sapone Calcio a 5, better known as Acqua e Sapone. He won the 2010-11 UEFA Futsal Champions League while playing for AS Montesilvano and began his professional career in Chieti in 2003.

Luis Amado is a dominant Spanish goalkeeper known for his remarkable consistency throughout his career and his role on an unbelievably successful Spanish squad. Over the course of his career, Amado was a part of countless successful teams. He won two World Cups, three UEFA Futsal Cups, and five UEFA Futsal Euros during his time as a member of Spain’s futsal team. He also won the Best Goalkeeper in The World Award for both the 2003 and 2004 season.

Ferrão, a Brazilian pivot who currently plays for Barcelona, is rapidly building his resume as an all time futsal great. Over the course of his career, Ferrão has won three Best Futsal Player in the World Awards (2019, 2020, and 2021) and won the 2019 UEFA Futsal Champions League title in the 2019-2020 season with Barcelona. He also led the Brazilian team to a third place finish in the 2021 Futsal World Cup and won the Golden Shoe.

Andreu Linares is a former futsal player who played for the Spain national team. He also played for famous teams such as Barcelona and Inter Movistar. In his famed career, Linares was able to win four International Cups, three UEFA Futsal Cups, and one World Futsal Championship. While he never won a World Cup with Spain, he was able to help guide them to a runner-up finish in 2008.

The greatest futsal player of all time is Falcão. Falcão is a legendary futsal player, with 48 career World Cup goals, two World Cup Golden Ball awards, and four Best Futsal Players in the World awards to show for his efforts. He retired in 2016, but his impact on the sport of futsal will last for generations.

What futsal player has won the most “Best Men’s Player In The World” Awards?

The futsal player with the most Best Men’s Player In The World awards is Ricardinho, who has won six of them. Ricardinho, born in Spain, is far and away one of the best futsal players the world has ever seen. Of his six best player awards, five were won consecutively from 2014-2018.

Who is the all time leading goal scorer in the FIFA Futsal World Cup?

The all-time leading goal scorer in the FIFA Futsal World Cup is Falcão. The Brazilian participated in five World Cups and scored a total of 48 goals in 33 matches. This means Falcão averaged 1.45 goals per World Cup match. He also sits five goals above the next closest player (Manoel Tobias).

Pages Related to Top 10 Futsal Players Of All Time