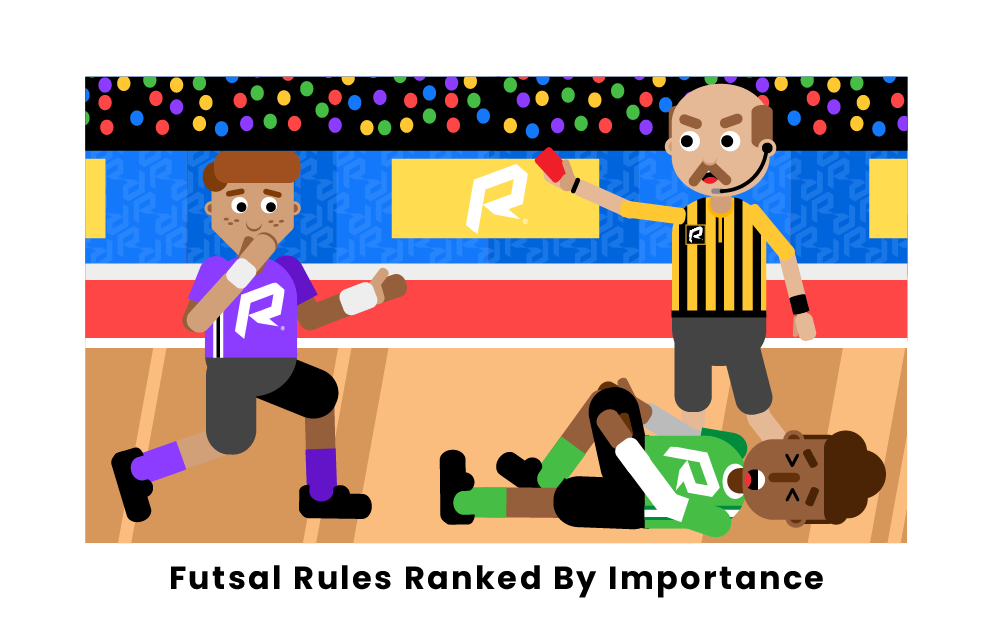 Without a doubt, the rule barring players aside from the goalkeeper from using their hands to interact with the ball ranks as the most important rule in futsal. This is due to the fundamental impact this rule has on the game, as playing the game with feet is the core premise for soccer as a whole, and futsal by extension. The impact on the game if this rule were taken out would be extreme; players would be able to pick the ball up, throw it, catch it, as well as any other form of manipulation through the players’ hands. The sport of futsal would become an entirely different game fundamentally.

While slide tackles and other physical defense is allowed in soccer, futsal is more strict on the matter and does not allow players to slide tackle one another. One important reason for this is the hard ground. Futsal is played on a more similar court to basketball than to a soccer field. If a player were to be sent flying, their chances for injury are far greater. Futsal players don’t wear any sort of protective gear, aside from indoor soccer shoes to prevent slipping. They are not protected if they were to fall to the ground.

Another reason is the close quarters; most players are relatively close to each other at a time, like basketball. One trip or tackle could easily result in multiple players going down at once.

A third reason is the style of the sport. Futsal highlights the technical skill of soccer, by sacrificing the physical or athletic aspect to a degree.

While the most notable difference in the rules of soccer and the rules of futsal would be the lack of offsides in futsal, this rule is still far more important. While soccer allows 11 people per team on the field at a time, futsal only allows 5 per team. This is because all sports fields, courts, and rinks are designed for a specific amount of players. Futsal courts are smaller than soccer fields by a considerable margin. The width of a futsal court is between 66 and 82 feet, with the length being anywhere from 125 to 138 feet. This makes a futsal court a little more than one third the size of a soccer field. If futsal were allowed to have 11 players per team on the court at once, like soccer, the result would be disastrous. The court would be overcrowded, which is why only 5 players from each team are allowed on the court at once.

In futsal, similar to soccer, direct goal scoring opportunities can come directly from fouls. Far away from the goal, or in the case of an indirect free kick, fouls usually only mean a turnover in possession. However, on a futsal court, there are two penalty areas, one of which being 6 meters from the center of the goal line in every direction, with the other being 10 meters from the center of the goal line. If a foul is committed in this area by the defending team, the attacking team gets a penalty kick from a specific centered point within the respective penalty area that the foul was committed in. This only allows two players in the area, the deemed shooter of the ball, and the goalkeeper.

A penalty kick is essentially a free shot on goal, and is a good chance to score a goal. If an intentional foul is committed outside the area, a direct free kick is awarded. This allows the defensive team to set up a wall of players to block the shot, as well as cover other attacking players. However, this is still essentially a free shot on goal for the player taking the free kick, and is a good goal-scoring opportunity.

Futsal has a different style to it than soccer. It is far more technical, due to the lack of playing area as well as soft grass that support an athletic approach, but also a lot faster paced, due to the smaller teams and playing area. This difference is accentuated by the addition that there is no offside in futsal like there is in soccer. Offside is the rule in which a player on the attacking team cannot be behind the last line of defense before the goalkeeper when a pass is played, and receive that pass. This rule is in effect to prevent “cherry picking,” which is when a player simply stays near the opposing team’s goal, hoping to latch on to any ball that the attacking team plays in. However, as previously mentioned, futsal is played in a much smaller arena than soccer, and it would be tough for a striker to be far enough behind the defense that the defense wouldn’t be able to somewhat react to a ball played through to the striker.

Physical offenses like tripping and tackling are highly dangerous to the players, due to their lack of protection and the close quarters of play. In futsal, a yellow card insinuates a warning, if the player receives another yellow card within the time frame of the match, they are automatically issued a red card, and are taken out of the game, with their team having to play the rest of the game with one less player. Players can also receive immediate red cards, with no previous yellow card, if the referee deems the committed foul bad enough to warrant it.

This rule, like the rule barring types of physical defense, helps to protect the players, as it doesn’t allow any player to continuously make dangerous plays. This rule also helps prevent cheating. For example, those who intentionally commit a hand ball will almost always receive a card, which can be red or yellow dependent on the situation in which the hand ball was committed.

Every sport needs to have a ruling for a situation in which a foul is committed on the attacking team, yet it would still be in the team’s best interest for no call to be made. In futsal, as well as soccer, the advantage rule allows the team with the ball to continue playing uninterrupted by the referee if a foul is committed, as long as they keep the ball comfortably. This is a massively important rule, as it has allowed many well-deserved goals to be scored.

If two futsal players were in on goal past the defense, and the goalie fouled one, but the ball ended up at the other player’s feet with an open goal, this opportunity would be far easier than a penalty or a free kick. This rule allows the play to continue in situations like this, so that a foul can only be beneficial to the team who receives a free kick or penalty.

Without this rule, in situations like this where the play is stopped and the foul is given, the entire point of the foul is undermined as the team who committed the offense is actually the one who benefits from the call, as they now have an easier time of stopping the goal. Even in non-scoring situations, this is important, as the flow of play can be interrupted by a foul being called once a team has their rhythm flowing.

In futsal, when the ball gets sent out of bounds on the sides of the field, the ball gets put back into play by use of a kick in. This, according to all the regulations, is essentially the same as an indirect free kick from the sideline. This allows futsal players to have far more control and potential from the other time putting the ball out of bounds.

Due to the smaller, more crowded field, the ball has a lot of potential to go out of bounds in the first place. This gives each team a lot of important free possessions, all of which have potential to become goal scoring opportunities rather quickly, as there is no limit to the distance a player can kick the ball on a kick in.

What makes the handball rule the most important rule if it doesn’t protect the players’ safety?

It is true that handballs may seem less important than rules barring physical defense, as it doesn’t protect players like the rules against tripping and tackling. However, not being allowed to touch the ball is what makes futsal the sport it is. If players were allowed to play with their hands, the sport would change fundamentally, and would be more similar to basketball or handball than to the original futsal.

How many rules are there in futsal?

While the above list highlights the main important rules of the game, it does not encompass every minor infraction, guideline to the format of the game, and regulation. According to the most recent list of rules, there are 82 areas of the game that are governed by regulations. While this seems excessive, it leaves no room for error in determining the ruling on situations that can happen during a futsal match.

Is there only one set of futsal rules?

Like almost any other sport, futsal’s rules don’t necessarily have to be universal to all leagues. There are many differences between the rules for futsal at a competitive level of the Futsal World Cup and a youth league. The rules of every sport are manipulated so that people of all levels can play. However, as far as official rules go, the most reliable list would be the one FIFA releases each year, as they determine the rules of professional futsal.

What makes the rules of futsal such an integral part of the game?

The rules of futsal, like any sport, are what make up the game. Without the rules, there would be no division between futsal, soccer, football, basketball, or even hockey. The rules of a game are also a guide to how to play the game. They are just as much a part of the game as the goals, passes, and saves that occur during the match.