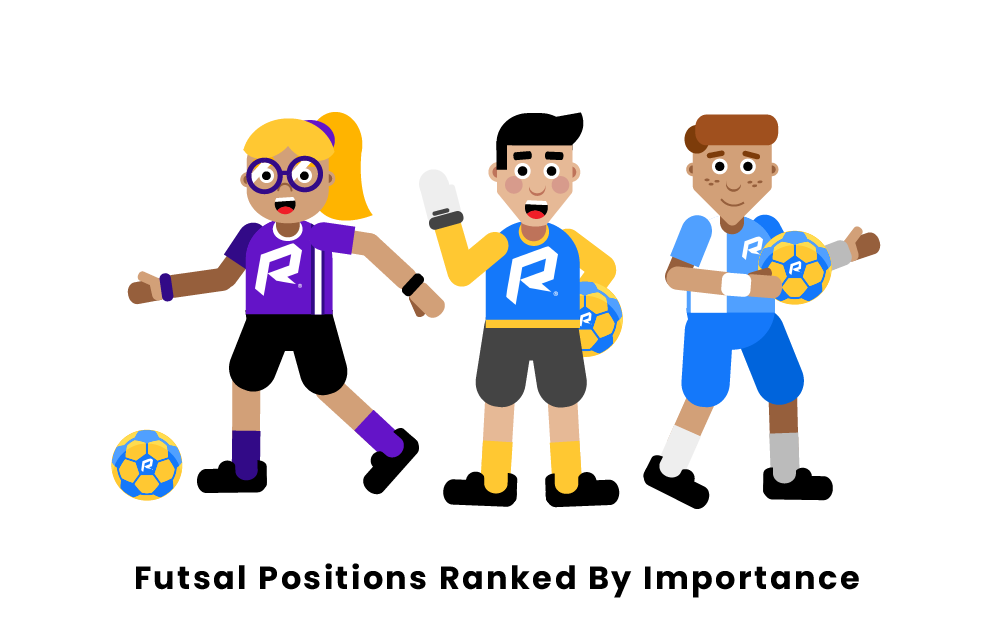 What are the most important futsal positions?

All futsal positions are important for the game to be played with strategy and techniques. Below is a list ranking of importance between the five futsal positions: the goalkeeper, the two wingers, the pivot, and the defender. Universal players are also allowed and are able to play freely throughout the positions. The goalkeeper is the only position that cannot move freely around during the game. Here are the most important futsal positions ranked.

Goalkeepers play a crucial role in futsal, similarly to their role in soccer. The goalkeeper has the most specialized position and is counted on to defend the goal at all costs. This role is to completely prevent the other team from scoring. Goalkeepers are especially important to turn the game to the other side. Aside from protecting the goal, goalkeepers are important to instruct the team and issue any commands from their perspective, showing the whole court ahead of them. They are able to make calls and instruct their teammates in making the proper plays.

Goalkeepers are only allowed to possess the ball for four seconds, making them have to be quick and think of their feet for the success of their overall team. While the goalie does not score points for their team, they have a high responsibility in preventing the other team from scoring, making them the number one most important position.

Wingers are the next most important position in futsal, as they have a strong role throughout the game. The wingers are placed on the outsides of the field and play both defense and offense. Since there is no wall in futsal, this role is difficult and takes a lot of skill. By being both defensive and offensive, wingers take on a huge role throughout the game. They are able to change direction quickly based off of the direction of the play and have to think quickly on their next move. This responsibility on the field makes wingers be very good with their feet, quick, and lead the team in most circumstances.

Wingers work directly with the pivot and defender to ensure everything is set up correctly to win the game. The wingers are the second most important positioned players on the team because of their duty to help everyone around them. They have a strong responsibility and hold the team together through their offensive and defensive strategies.

The pivot, also called the forward or topman, is the next most important position as it is the most advanced player on the team. The pivot is the crucial offense player whose focus is to score. The pivot is most advanced, meaning they are the highest player on the court in charge of attacking the other team. The pivot plays directly against the opposing team’s defender. This player is typically the one to shoot and score goals for the team. The wingers play on the court assisting the pivot in all offensive attacks.

The pivot is constantly playing against the other team’s defender and needs to have high scoring skills in order to effectively play. By making goals, the pivot is the next important position since they allow for the team to advance and win games through their offensive attacks.

Defenders make smart assists to the wingers or pivots and send the ball to the opponent's side of the field. The defender must be focused at all times when the ball comes to their side, which makes the position have some pressure in order to avoid failure. Working with the most important player, the goalkeeper, the defender works hard to make the goalkeeper’s role easier when defending the goal.

There are universal players in futsal that are allowed to travel around the field freely. The only player who mostly remains in their set position is the goalkeeper. The goalkeeper must remain the goal during the duration of the game and cannot travel up to the opponent’s side. The defenders, pivots, and wingers have freedom to travel around and play in any way in order to win the game. By playing with set positions, futsal teams are able to develop stronger strategies rather than just have players play freely. Players do not typically play universally unless needed during the game.

How many futsal positions are there?

Futsal is played 5v5, which means each team is only allowed to have five players playing at once. Given this, that means there are five positions for these five players to be in at once. These common futsal positions are the goalkeeper, the two wingers, the pivot, and the defender. Players are able to switch around from positions or move freely around the court even if they hold a specific position. This is why some futsal players consider themselves universal players. The only player who must stay in their spot is the goalkeeper.

Are there specific rules for each position?

Most of the positions do not have specific rules. Whether you are the pivot, defender, or the wingers, you are still able to move freely around depending on the circumstances in the game. The players are not bound to their positions and are not punished if moving. Futsal encourages teamwork and free play if needed during game play. The goalie is the only one on the court who is allowed to touch the ball with their hands. They are also only allowed to hold the ball for four seconds. The goalkeeper must stay in their position the entire time, and cannot travel up the field.

Who are the best futsal players from each position?

There are many great futsal players in the world, each of them having specific designated positions they are known for. One well known goalkeeper is Luis Amado, who has since retired but has made a strong name for himself in futsal. Well known defenders are Kike and Julio, both of which were known as some of the greatest futsal players in the world.

There are many great wingers, with Falcao being known as one of the best in the world. Falcao is known as one of the greatest futsal players of all time, and his performance is best seen as a winger. Lastly, Vahid Shamsaei is a well known pivot, admired for his strong offensive attack.

Which futsal position is the hardest?

Each futsal position is important and difficult in different aspects of play. A goalkeeper is viewed as the hardest position by many because of the amount of pressure and control needed to protect the goal at all costs. This is why the goalkeeper was ranked as the most important position in futsal. In addition, futsal goalkeepers get to see the whole game play and make sure their team is performing strategically and well in order to win. The goalkeeper is one of the most powerful positions, which makes it difficult to perform well in.

Aside from the goalkeeper, all other players have their own duties and responsibilities in the game to work together in order to win. futsal takes strategy, technique, and most of all, communication.