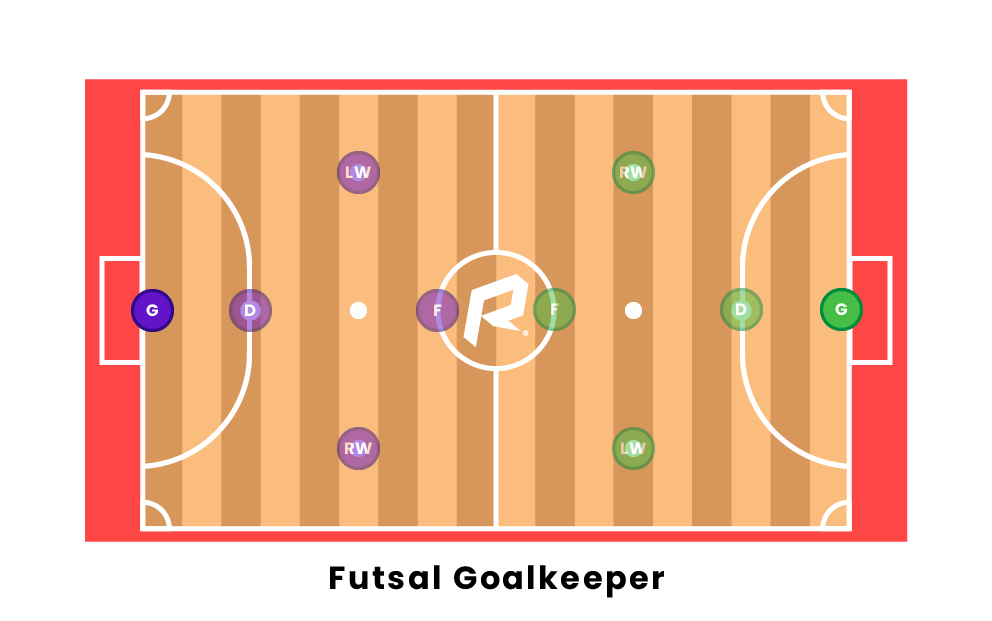 Futsal is an indoor sport similar to soccer, in which the goal is to use your feet to score a goal. And since there are goals, there are goalkeepers, one of the many similarities between futsal and soccer. Although the position is the same and their mission as well (to stop the rival team from scoring), futsal goalkeeping and soccer goalkeeping are two very different crafts.

To begin with, futsal goals are much smaller than soccer, so the area that must be covered by futsal keepers is much smaller. The speed of the game also varies greatly, as well as the size of the court, and number of players. Consequently, while soccer goalkeepers and futsal can certainly learn from each other, the most important skills in each sport are quite different.

Futsal is a quick game, where players don't have much time to think about what to do before getting rid of the ball. The same is true for the goalkeepers. In addition to being fast with their hands, futsal goalkeepers must also be quick with their feet; spending a little too much time with the ball or a slightly wrong pass can lead to a goal. The quick game pace and the speed at which passes are taken and shots shot also makes it imperative for goalkeepers to have fast reflexes, and they spend lots of time sharpening them in practice.

The lower limbs also come in handy when defending. In futsal, shots are taken from really close range; sometimes feet and legs must be used to keep the opponent from scoring. That also comes with some sacrifice; futsal balls are heavier than soccer balls, so keepers must be brave enough to put their bodies in between the goal and the ball. In addition to all that, keepers must be communicative. They can see the whole court, and thus can instruct teammates and adjust positioning.

Given that a futsal court is really not that big and that the game is very fast, it is not unusual for goalkeepers to leave the goal and go upfront or even for line players to act as keepers. This gives the team more power when attacking, despite losing an expert for the position. Truly, any player can be subbed in for a goalkeeper, and the keeper is more than welcome to go ahead and try hard on attack. However, there is a rule as to how goalkeepers can play with the ball in their feet. A goalkeeper cannot possess the ball in the defensive court for more than four seconds. The rule exists to keep goalkeepers from slowing down the game too much, similar to what a shot clock does in basketball. It only adds to the need for keepers to be good and quick with their feet. Overall, being a futsal goalkeeper is not an easy job. Goalkeepers are easily recognizable in a futsal game. They wear a jersey colored differently from that of the rest of the team. Goalkeepers can also wear pants and gloves.

In futsal, goalkeepers can wear gloves, but they don't have to, and it is common to see them not doing so. By not wearing gloves, goalkeepers have more precision when throwing the ball. Gloves also make less of a difference than they make for soccer goalkeepers for example, as futsal balls are way smaller, and thus easier to grip. However, some goalkeepers still feel better when using them. They feel more protected and play more comfortably. In the end, it comes down to each goalkeeper's preference.

What is a "fly goalkeeper"?

A "fly goalkeeper" is the name given to a goalkeeper who leaves the goal area to act like a line player, trying to attack and score. This is a very common tactic, and it is used especially when the team is losing and there's not much time left. While the risks of having a fly goalkeeper are big, so can be the rewards. The possibility to play forward only makes it more important for futsal goalkeepers to know how to play with their feet.

Which are some of the best futsal goalkeepers?

Futsal Awards are given out to the best players in the world every year. Although the sport started in the 1930s, the awards only started being given out in the 2000s. Nonetheless, they help us see who some of the best players and goalkeepers in the sport are, or have been. Among the goalkeepers, Leo Higuita and Stefano Mammarella come across as some of the best futsal goalkeepers out there. While Higuita has a record-breaking four "Best Futsal Goalkeeper in the World" awards, Mammarella is not far behind with three wins.

How big are futsal goals?

Futsal goals are a lot smaller than soccer goals, which changes a lot the way goalkeepers play the game. A futsal goal has 9.8 feet between its two posts and is 6.5 feet tall. Overall, that is an area of 63.7 square feet that the goal keeper has to protect, compared to 192 in soccer.