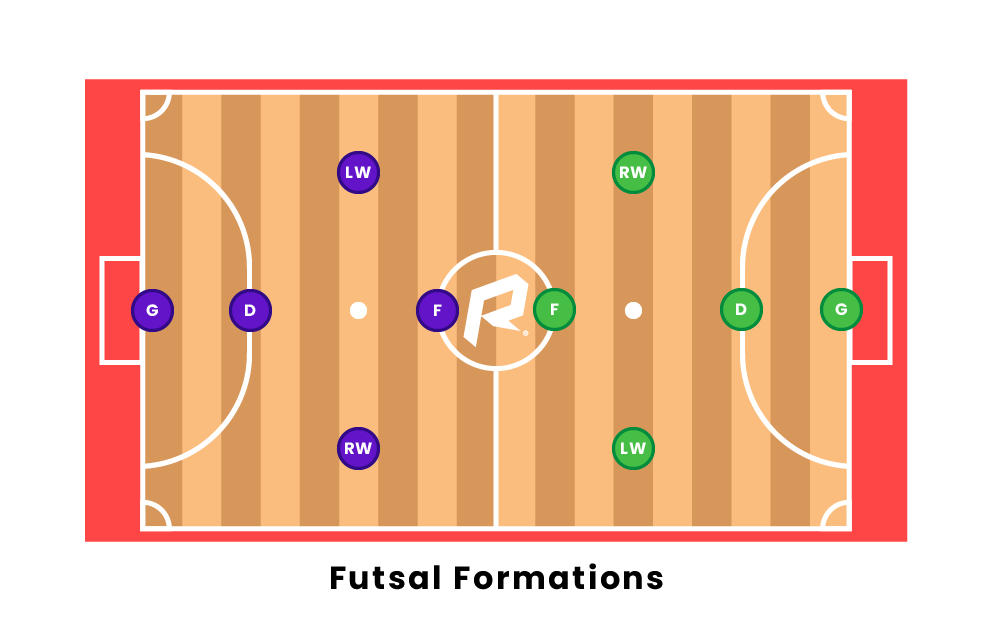 Like many sports, there are several different formations that teams use when playing futsal to strategically place players on the pitch.

Each team has five athletes on the pitch at a time that can be organized into formations. A few of the most common formations are the diamond, pyramid, the Y, and the box.

In this formation, players arrange themselves into a 1-2-1 pattern that resembles a diamond. On the pitch, one player is on defense, two players are around midfield, and one is a striker. The diamond formation is used by teams because it is organized and covers all areas of the pitch. In addition, the two midfield players can assist on both the offensive and defensive end. It is important that both midfield players are in good physical shape to keep up with the considerable amount of running.

The pyramid formation has a 2-1-1 pattern of players and somewhat resembles a triangle. For the pyramid, there are two defenders, one midfielder, and one striker. This formation provides teams with a defensive cushion, as there are two defenders at its base to help protect the goal. Therefore, the team has the option to send a defender to attack the goal and still have a defender to assist the goalkeeper. It is important that the midfielder and attack player work in harmony in this formation. The midfielder should help attack while the attacking player should also help the midfielder defend.

The Y formation is the opposite of the pyramid, with players organized in a 1-1-2 pattern. Therefore, this is an offense heavy formation with two strikers and only one defender and midfielder. For teams wishing to focus on attacking, this formation is useful because of the two strikers that are in position to score. Additionally, the formation can help reduce confusion on the defensive end because of the solo defender in the backline. With two strikers on the front line of the formation, it is important to implement a high press system on defense so that the backline defender is not responsible for covering all of the opposing players on their own.

The box formation has players in a 2-2 pattern that resembles a square. This is a more open formation as there are no midfield players. Instead, there are two defensive players and two strikers. Teams utilize this formation because it provides a sense of balance and clarity on the pitch, with all four players having a clear understanding of their roles. To be most effective, a team should choose versatile players for this formation who are comfortable playing any of the four positions. With that being said, communication is crucial between rotating players so that they are on the same page and do not leave the goal unprotected.

How do teams decide what formation to use?

When choosing a formation, it is important for teams to consider the skill and abilities of their players along with their desired strategy and the skill of their opponent. If a team wants to take a balanced approach, either a square or diamond formation might be favorable. If the team wants to play more conservative, a pyramid formation provides defensive security. Conversely, teams that want to play more aggressively might use a Y formation for the extra attacking strength.

What is the wall formation?

Like the pyramid, the wall is another defensive focused formation. For the wall, players are arranged in a 3-0-1 pattern. Generally, teams will not use this formation for the entirety of a match. Instead, they will implement it when they need a defensive stop because there are three defenders along the backline. This can often be when the opposing team has an advantage or if they are simply very strong on offense.

What is the all or nothing formation?

The all or nothing formation is the opposite of the wall, with players organized in a 1-0-3 pattern. Since there are three strikers and only one defender, this formation is very offense heavy and can be risky because there is little defense. Teams do not use this formation very often but when they do, it is usually because they need a goal toward the end of the game and need all the attacking strength possible.

Do formations win the game for teams?

In futsal, formations are very important in determining the success of a team. Choosing the right formation that aligns with the skills and strategies of a team is useful, but will not win the game alone. The team must remain organized throughout the game for the formation to be effective. In addition to the formation, a team will be much more successful if they communicate frequently with each other during the game to keep all players in harmony.