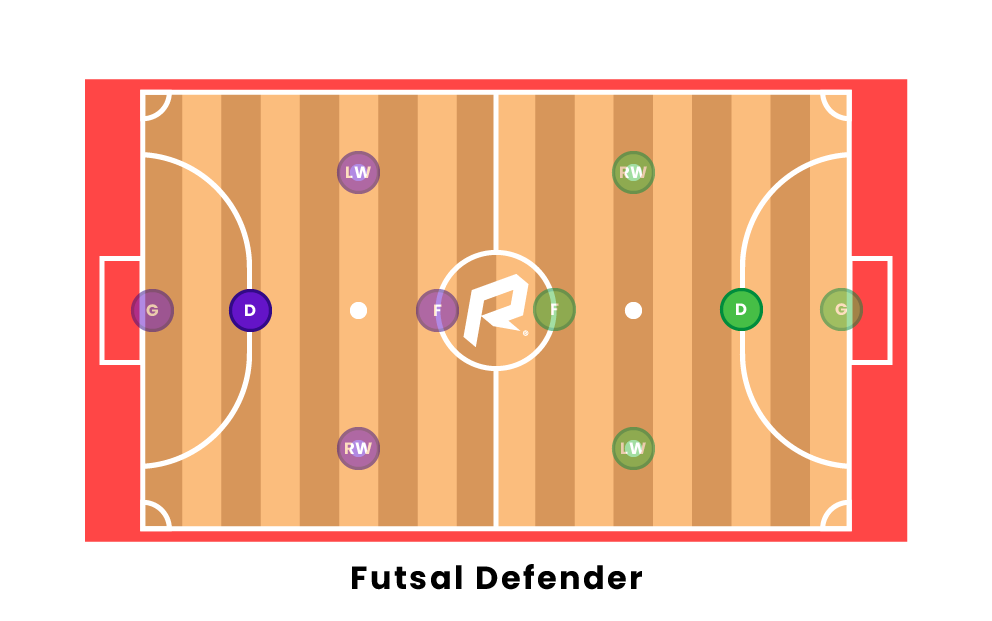 In futsal, the defenders are responsible for stopping the opposing team while they are attacking. In futsal, there are 5 players on each side and there is no limit to how many of those players are defenders. However, it is most common to start 1 or 2 defenders on a futsal team.

With that being said, defenders are also responsible for being involved in their team's attack. While defenders are by no means the primary attacking options, on a small field with a small number of players, they certainly are involved. In futsal, it is more common to see defenders making passes to start the attack than it is to see them taking on the opposing team’s defenders with skill moves.

One of the most important aspects to being a successful defender in futsal is positioning. Since the field is particularly small, being in the correct position is vital for stopping the opposing team’s attack. In addition, positioning is also important to cutting off and intercepting passes.

Communication is also extremely important. The defender is typically the furthest player back in futsal which means they can see the whole field, so it is important that they communicate with their teammates.

Lastly, it is key that defenders in futsal mark the opposing teams attackers. On a small field like futsal, it is easy to get caught up trying to win the ball, but it is equally as important to stay with your mark as an open player can be just as dangerous.

There are also several traditional outdoor soccer defending techniques that apply to futsal. One of these techniques is forcing an attacker onto their weaker foot. In soccer and futsal, players typically have a dominant foot and a weak foot. It is important that a defender positions themselves in a way that forces the attacker to use their weak foot.

Another technique that is used by outdoor soccer players that applies to futsal is the defenders approach. When approaching an attacking player, it is important that the defender decelerates so that the attacker does not run right by them. Decelerating will force the attacker to make a pass or use a skill move, however if you approach an attacking player at full speed, they can easily touch it right by you.

Why is it important to decelerate when approaching an attacking player?

How many defenders are there on the field in futsal?

There are five athletes on the field for each team in futsal. There is technically no limit to how many of those players can be defenders, however it is common to have 1 or 2 defenders on the field at a time. There are several different formations that can be used in futsal such as a diamond or a box formation, and most of the common formations do not include more than 2 defenders.

What is a futsal defender’s main responsibility?