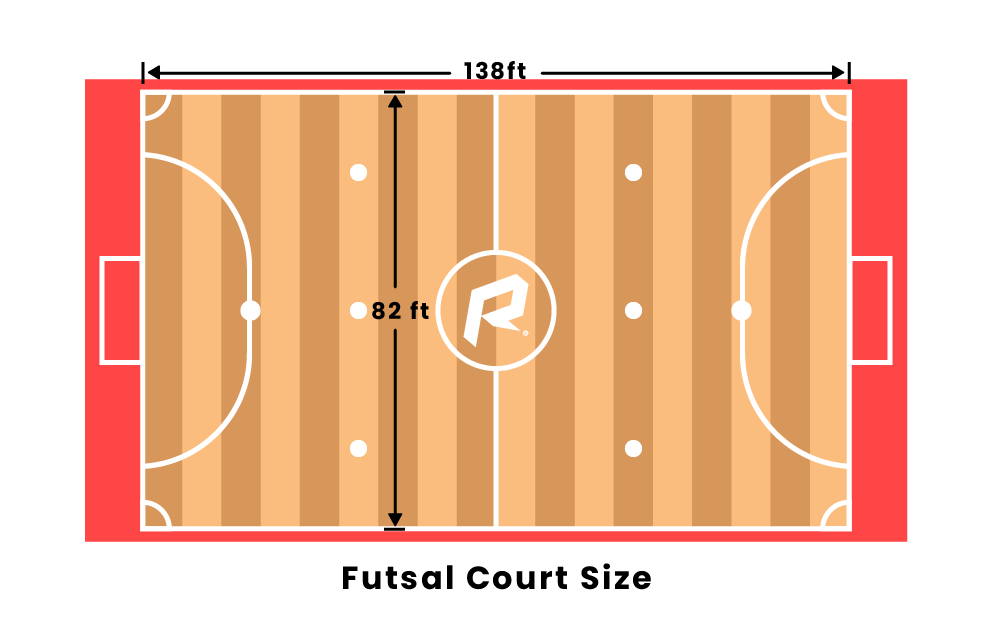 Futsal is a variation of football played by teams of five players. It has become very popular around the world in the last few decades, yet not too many people know about the logistics of the court itself. The basic dimensions of the court are very similar to traditional football and soccer fields, but there are many intricate features to learn about before playing. They are also similar to basketball courts, and when players do not have access to a standard court they will often play on a basketball court.

Depending on what kind of futsal game is being played, the futsal court dimensions can vary. Courts being used for domestic games are typically smaller than those used for international matches.

Domestic futsal courts are generally smaller than international courts. Since they are used to play games within a given country or area, the sizes may vary depending on what the rules are in that country. The reason that it varies so much is because there are no permanent boundaries around the edge of the court. Because of this, the dimensions can be easily altered depending on the preferences of the players.

The length of a futsal court must be a minimum 25 meters but no more than 42 meters. The width of a court must be a minimum 15 meters and no more than 25 meters. If the space is enclosed, the run-off area can differ depending on the court. The standard recommendation is that the space is 2 x 2 meters. If there is an open court, it is also recommended that the run-off space is 2 x 2 meters.

International futsal courts, as previously stated, are typically larger than courts used for domestic games. Since there are no barriers, the courts can be altered and international teams enjoy playing games at a larger level.

There are many key features to futsal courts that make them different from typical football and soccer fields. The pitch or court used for futsal is rectangular, and the length of the touchline must be greater than the length of the goal line. The court has a circle in the center that has a radius of 3 meters. There are also two quarter circles, or penalty areas, that have a 6 meter radius. These penalty areas are also outside of each of the goalposts. Additionally, there are two penalty marks on the court, one of which is 6 meters from the center of the goal line and another which is 10 meters from it. There are two other marks that are 5 meters from the second mark on either side. This indicates the distance that free-kick must be taken from around the second penalty mark.

In the four inner corners of the court, there is a quarter circle drawn with a radius of 25 centimeters. This area indicates where the ball must be placed when a corner kick is being taken. On one long side of the court, there are substitution zones placed directly in front of both team’s benches. On either end of the court, there are two goals that are placed in the middle of the two goal lines that are approximately 3 meters apart. The goal itself is 2 meters high and the nets are required to have a depth of at least 80 centimeters at the top and 100 centimeters towards the bottom. These goals must be stable to ensure that they do not move outside of the indicated goal lines.

Are all futsal courts the same size?

How much does a futsal court cost?

Due to the variance in sizing and dimensions of futsal courts, the cost to build and set up a court varies. The desired quality of a futsal court can lower or raise the overall price. Additionally, the purchase of land and equipment to construct the court may vary and alter the overall price. Typically, an average futsal court costs around $25,000, which is far less than the average cost of a soccer field or basketball court.

What are the key features of a futsal court?

There are many important features of a futsal court. The pitch or court itself must be rectangular and within the indicated dimensions depending on whether it is being used for domestic or international games. There is a circle in the center of a court with a radius of 3 meters. There are also two goalie boxes and nets at both ends of the court that are 3 meters wide. Some of the other key features include penalty areas, penalty marks, corners, and substitution zones.

How do futsal courts differ from 5-A-Side and 11-A-Side football pitches?

The size of a futsal court is much smaller than traditional outdoor pitch courts. Soccer fields are typically made from grass or artificial turf, but futsal courts are usually made with materials like wood and other synthetics. The boundary also differs between a football field and a futsal court, as the futsal courts have no walls along the perimeter. The court size will also differ depending on whether or not the court is being used for international or domestic matches.