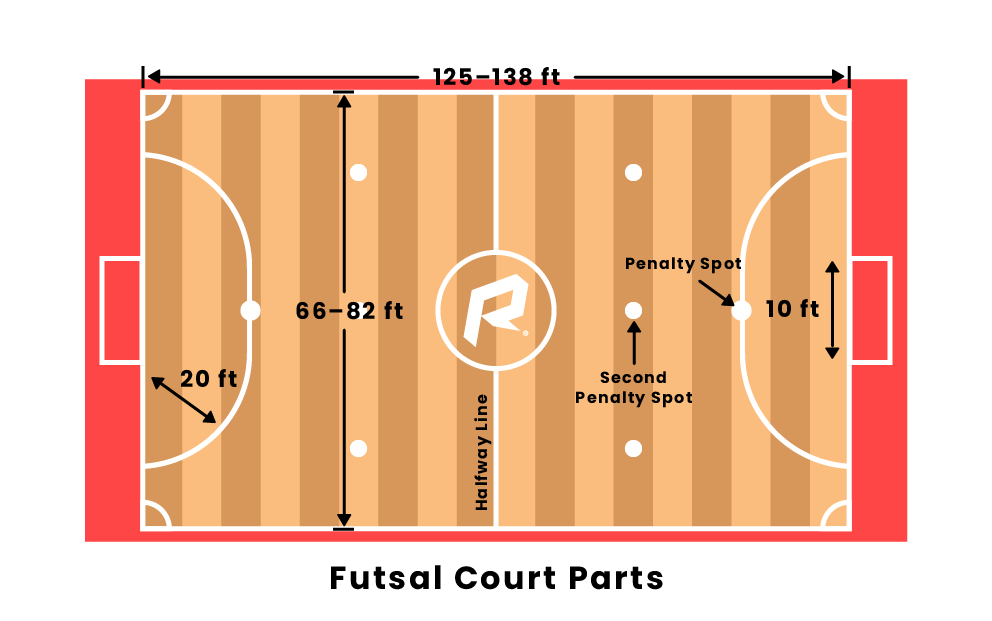 The game of futsal is an adaptation of soccer played on an indoor court. While much smaller than a soccer pitch, a futsal court has almost as many markings and parts to it. Futsal courts are often dual-purpose spaces also used for playing handball.

Perimeter lines, or lines that go around the outside of the court include goal lines, touch lines, substitution zones and the runoff space. All of these lines have a minimum and maximum range, so their dimensions may vary based on the location of the court.

The boundaries of a futsal court are formed by two goal lines and two touch lines. Goal lines are shorter than touch lines, although the exact measurements of these lines may vary.

You may also notice some small markings along one of the touch lines. These lines are used for "substitution zones," and are technically the only places where players are supposed to enter or leave the court from.

Each substitution zone is located directly in front of each team's bench and is at least 3 meters wide.

There are also two 3-meter wide zones on each side of the halfway line that mark space for the officials table to see the court clearly.

It is recommended to leave about 3 meters of runoff space around the perimeter of the court to protect players from injuring themselves out of bounds.

Interior lines are lines that are marked within the bound of the futsal court. These lines include the halfway line, the center circle, penalty areas, penalty spots, and corner arcs. There is also a designated location where the two goals must be placed.

The most obvious interior line on a futsal court is the halfway line, which divides the court into two equal halves, similar to a basketball court or soccer pitch. The midpoint of the halfway line has a circle with a radius of 3 meters.

Futsal courts also have penalty areas, although they are noticeably different than soccer penalty areas. In futsal, the penalty areas are formed by 6m-radius quarter-circles extending from each goal post. This area is referred to as the "D" because of its distinct D shape.

At the top of each penalty area lies a penalty spot. At 6 meters from the center of the goalposts, this is where penalty kicks are typically taken from. A second penalty spot is located 10 meters away from each goal.

On each corner of a futsal court there are corner arcs, each with a radius of 25 centimeters. These are used for corner kicks.

Each goal is located on the midpoint of the goal line, uses two 90 degree angles to construct a rectangular frame, and includes a net to catch the ball.

How big is the penalty area in futsal?

The maximum width of each of the penalty areas (along the goal lines) is just over 15 meters (6 meters from each post plus the 3 meter width of the goal).

How thick are the lines on a futsal court?

Futsal court lines are each 8 centimeters thick, which is the equivalent of three inches. This is similar to the line thickness standards for basketball courts and handball courts.

The intersecting notches on the touch line (used to mark off space for the substitution zones and space in front of the scorer's table) have the same thickness as regular lines, but extend 80 centimeters in width. This overlaps 40 centimeters onto the court, with the remaining length extending to the outside of the court.

How big is a futsal goal?

Each goal needs at least 80 centimeters of depth at the top of the goal and at least 100 centimeters at the bottom. This allows sufficient room for the ball to cross the entire goal line.

What are futsal courts made of?

The most highly recommended construction materials for futsal courts are treated and finished hardwood, similar to a typical basketball court; or some type of synthetic material.

The most important qualities of a futsal court are to be flat, non-abrasive, and large enough. Concrete or tarmac, while flat, can cause abrasions when players fall, and are therefore less encouraged. Professional futsal courts are almost always made from synthetic materials. Some futsal courts are also made from recycled outdoor basketball or tennis courts.