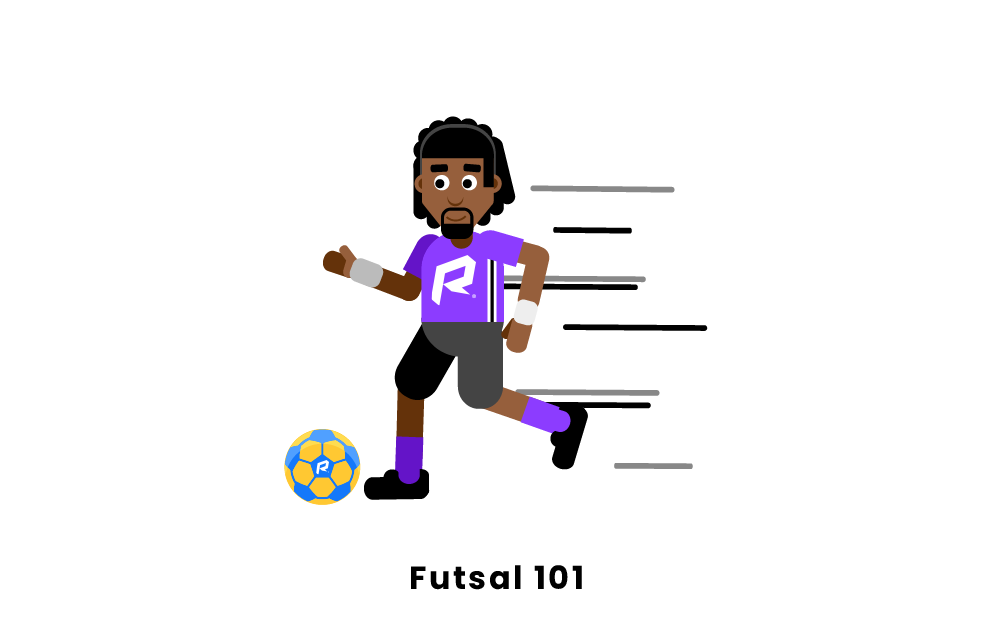 Futsal is a fast-paced, indoor game of soccer that is placed around the globe. It is officially recognized by both FIFA (Fédération Internationale de Football Association) and the Union of European Football Associations (UEFA). Futsal became FIFA's official format of indoor soccer in the 1980s and was originally thought of as the indoor version of soccer. However, there are many nuances between the two sports.

Since futsal is played indoors, the game requires a smaller, low-bounce ball. In regular soccer, there are 11 players per team on a grassy field at a time. In futsal, that number is 5 players, and teams play on a significantly smaller court. The court size ranges from 125 to 138 feet in length and 66 to 82 feet in width. The futsal court is smaller than a soccer pitch so the game can become more fast-paced, thus allowing more goals to be scored. This results in more exciting play as the tide of a game can be turned in a few seconds.

Just like soccer or handball, the futsal goal is in the center of each goal line and has two upright posts with a crossbar connecting the posts at the top. However, the net size on a futsal court is very different compared to the net size on a soccer field. On a futsal net, the distance from the lower edge of the crossbar to the ground is 6.5 ft. The distance between the goal posts is 9.8 feet.

Futsal's origins can be traced back to Montevideo, Uruguay in 1930. Juan Carlos Ceriani thought that it would be a good idea to play five-on-five soccer for younger competition in YMCAs. The term "futsal" is derived from Spanish word for "soccer" (Futbol) and the French root word for "indoor" (Sala). The idea for the name of the game was combining the root words soccer and indoor.

What is really special about futsal is that it is a great sport for young kids to learn how to play. Since the game only has five players on the field at a time, every player on the court has a major role and is actively involved at all times. This means that there aren't specific offensive and defensive positions. Every player has to have the capability to defend, facilitate, and score.

This sport also puts players to test because of the specific ball that is used. The futsal ball is not as bouncy as a normal soccer ball, so the ball is rarely in the air. In futsal dribbling abilities, ball control, and passing abilities are key. It is important for every teammate to be in sync at all times. This can result in better skill development, leading to more well-rounded players.

Playing this sport early on in life helps build team building abilities early on in young athletes' lives. It's also interesting to note that many soccer superstars such as Christiano Ronaldo and Lionel Messi grew up playing futsal.

Futsal is played across every continent and is receiving attention. Although futsal has never been played at the Summer Olympics, it was played at the 2018 Summer Youth Olympics in Buenos Aires, Argentina for the first time. There were ten boys and girls teams each. It was a huge step toward gaining the recognition needed to play at the highest level possible. Matches during those Olympics had about 60,000 spectators per match. This kind of youth participation is massive towards the growth of futsal.

Currently, futsal is considered to be the fastest-growing indoor sports in the world by FIFA and EUFA. Some fans of soccer in general don't like to watch a 90 minute sport in which no goals are scored. Futsal is not affected by this at all, as the game can change in the blink of an eye, like basketball.

Is futsal safer than soccer?

Since futsal is played on a much smaller court, it results in fewer injuries per game. For example, on a soccer field players are able to reach top speeds of around 20 mph when sprinting across the field. This can lead to players running into each other at very high speeds. On the other hand, futsal's small court takes away this factor.

Why does futsal increase teamwork abilities?

Futsal is played in a five-versus-five setting, which allows players to be involved in the action at all times. Players need to be constantly aware, as the momentum can change instantaneously because it is played on such a small court. Thus, players need to work in sync throughout the match so the team will win. This kind of intense and ongoing teamwork is much more consistent than soccer because not all eleven players are always involved on the field.

Where is futsal the most popular?

As of 2018, futsal is the most popular in Spain. Spain is followed by Brazil, France, Portugal, and Indonesia. Spain won the FIFA Futsal World Cup in 2000 and 2004. Over the last two decades, the Spanish National team has been the second most dominant overall in the world. A big reason for Spain being the most popular country for futsal is due to their numerous leagues. The Primera División is known for having some of the top players in the world, including Javi Rodriquez and Sergio Lozano.

How many players are on a futsal court at once?

Only five players are allowed to be on a futsal court at a time. However, each team is given a maximum number of nine substitute players. These substitutes can be brought in and out as many times as the coach feels is necessary.