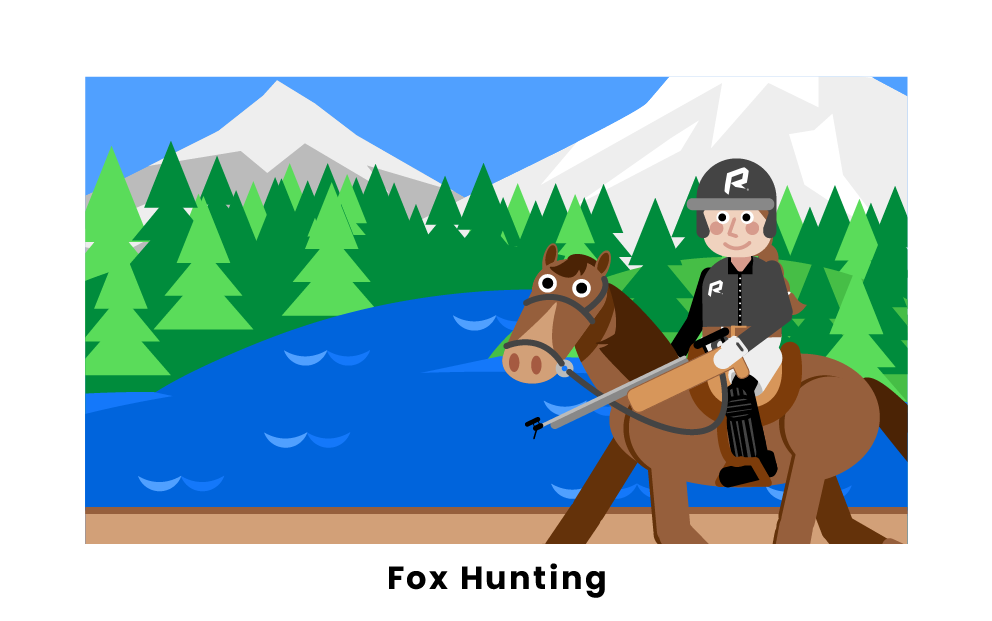 Fox hunting is a sport in which competitors on horseback chase and capture foxes with the help of hounds. Fox hunting involves a number of different people who adopt various roles in the hunt itself. Modern hunts are typically conducted by the master, while the huntsman controls the 20-30 pairs of hounds used on the hunt, which are referred to as couples. Additionally, there are two to three whippers-in who act as scouts and help keep the hounds together. These three roles are placed in charge of all other riders on the hunt.

Fox hunting dates back to the 15th Century, likely as a secondary form of hunting to stag and hare hunting, which was commonly practiced by medieval nobility. Its modern form originated around the year 1753 when Hugo Meynell began to breed faster and stronger hounds for his hunts, which soon drew large numbers of participants due to their exciting nature. During the 19th Century, fox hunting became a nationwide sport for the upper classes in the United Kingdom and followed wherever the British Empire conquered.

A modern fox hunt traditionally begins in the late morning, with the followers meeting up and joining the hounds, which are then sent off to search the hunting area (called a “covert”) for hiding foxes. When a fox is located, the hunt will be called by the huntsman, who sounds a horn, signaling the followers to chase and kill the fox, which may then be given as a trophy by the master to whoever distinguished themselves in the hunting process.

What is fox hunting?

Fox hunting is a sport where competitors on horseback chase and capture foxes with the aid of hunting dogs. Fox hunting is an ancient sport with roots in the Middle Ages but was popularized in the 18th and 19th centuries, quickly becoming a common sport for the British upper classes. Fox hunting is a sport that involves many people, including a master, a huntsman, two to three whippers-in, and at least 20-30 hounds, in addition to other riders in the hunt.

What are the best dog breeds to go fox hunting with?

What equipment do I need to safely fox hunt?

Traditional fox hunting involves a good deal of equipment and experience. Firstly, it is important that fox hunters know how to ride a horse safely. Fox hunters are required to wear a uniform consisting of a thick coat and a top hat or bowler, though, in modern fox hunting, these hats are replaced by riding helmets. Riders wear tan or white breeches and tall boots. Masters, huntsmen, and whippers-in are required to wear scarlet coats with white cravats and black velvet caps, distinguishing them as those in charge of the hunt, and carry whips which they use to signal the hounds.