Where Is Formula 1 Most Popular? 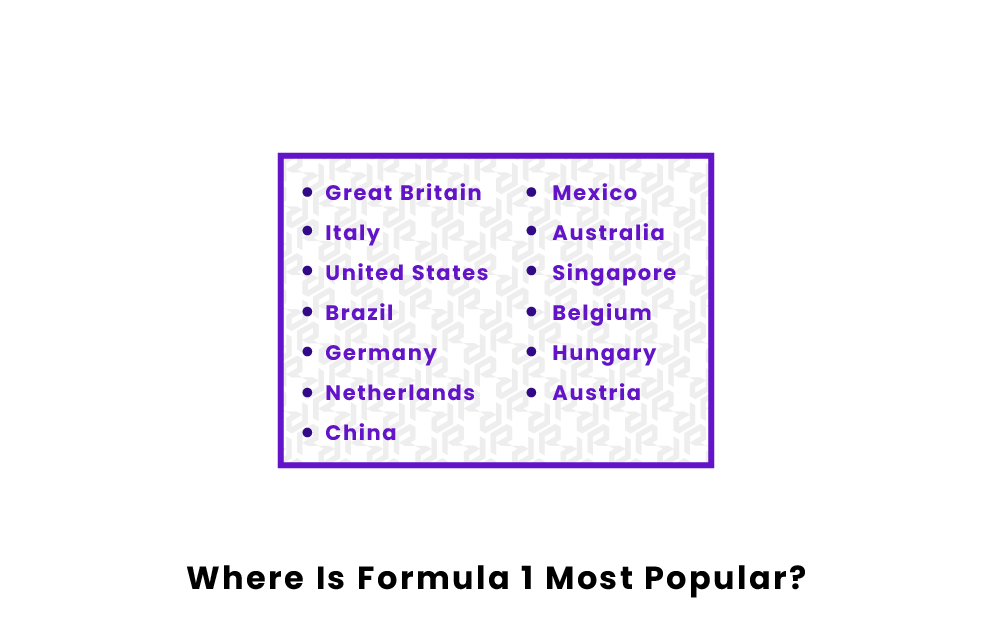 Unquestionably the most popular racing series on the planet, Formula 1 is often known as the king of motorsports. While other racing disciplines are more popular in some countries, Formula 1 is a truly international sport. Grands Prix are hosted all over the world, and drivers are recruited from a variety of native countries.

Have you ever wondered where Formula 1 is most popular? Although the sport draws fans from around the globe, some places have developed into hotbeds of support for Formula 1. Keep reading to find out which countries have the highest levels of fandom, both as television viewers and in person.

In terms of worldwide television viewership, Formula 1 crushes the motorsports competition, with over 1.9 billion viewers tuning in over the course of a season. An average F1 race easily surpasses 80 million viewers. By comparison, NASCAR, the second-most popular motorsport in the world, draws around 10 million viewers per race from a primarily American audience.

After a slump throughout the 2010s, television viewership of Formula 1 races has been steadily rising, increasing several percentage points every year. While popularity is up across the world, particular countries reliably attract more race viewers than others.

The top five television markets for Formula 1, ranked from least to greatest by viewership numbers, are the Netherlands, Great Britain, Italy, Germany, and Brazil. Each of the top five markets attracts more than 100 million cumulative television viewers over the course of a season.

The United States ranks a respectable sixth place in television viewership. With popularity increasing and more domestic races being added to the schedule, the US is poised to crack the top five in the upcoming years.

Much of the increased interest in Formula 1 racing in the US can be attributed to the hit Netflix show Drive to Survive, which debuted in 2019. The reality-style series depicts the drama of drivers and teams as they navigate the everyday struggles of a racing season. After nearly 50 years of efforts by F1 to excite viewers, the show has finally ignited American fandom, especially among younger generations. Television viewership of Formula 1 racing in the US has increased by more than 50 percent yearly since Drive to Survive began airing.

The Miami Grand Prix was added to the schedule in 2022 as a result of overwhelming interest in the United States Grand Prix, and a third American race in Las Vegas has been added for 2023.

Most of the other countries experiencing rapid growth in viewership are already ranked inside the top five overall. However, China, currently ranked seventh overall, has seen a significant uptick in viewers, as has Russia.

In addition to certain countries having higher concentrations of television viewers, there are also particular races on the schedule which attract greater numbers of viewers worldwide. The Italian Grand Prix is the most popular Formula 1 race to watch on television, attracting over 110 million viewers. Additionally, the Grand Prix de Monaco and the Grande Prêmio de São Paulo each reliably get over 100 million viewers–as did the Grosser Preis der Eifel in Germany until it was removed from the schedule after the 2020 season.

Another way to measure the popularity of Formula 1 in a country is to evaluate the attendance numbers at each of the host nations’ Grands Prix. Interestingly, the most popular races to watch on television do not necessarily receive the highest in-person attendance. Of course, the limitations of individual track facilities may affect these numbers by capping the maximum attendance at a race.

Currently, the United States Grand Prix is the most highly-attended race on the Formula 1 schedule. The 2021 running, on October 24, attracted over 400,000 fans. With the Miami Grand Prix joining the calendar in 2022 and a third US race slated to be added as soon as 2023, the United States will likely dominate yearly attendance numbers at Formula 1 races for the foreseeable future.

Mexico’s Gran Premio, formerly the attendance champion, came in second with over 370,000 fans in attendance in 2021. In third place was the British Grand Prix, drawing over 350,000 fans.

The remaining most highly-attended races on the 2021 Formula 1 schedule, in decreasing order of crowd size, are the Belgian Grand Prix, which draws over 200,000 fans; the Dutch Grand Prix and the Turkish Grand Prix, with more than 190,000 spectators each; and the Grande Prêmio de São Paulo in Brazil, with over 180,000 fans. Continuing in descending order, the Formula 1 races held in Abu Dhabi, Saudi Arabia, Austria, and Hungary all command well over 100,000 fans each.

What place has the highest F1 popularity by country?

The Netherlands has the highest F1 popularity by country. This nation of 17 million people has the fifth-highest F1 television viewership, and the Dutch Grand Prix is the fifth-most highly attended race on the schedule. Great Britain is a close second in terms of popularity, followed by Italy and Belgium. Other countries where F1 is popular are the United States, Germany, Brazil, Mexico, and China.

Where is the highest F1 viewership by country?

The highest F1 viewership by country is found in Great Britain, although viewership of the sport is high throughout Western Europe. Germany, Italy, and the Netherlands are other Western European nations with high Formula 1 viewership numbers. Formula 1 is a truly worldwide sport, and viewership is high in countries across the world, such as Brazil, the United States, China, and Mexico.

Is Formula 1 popular in the US?

Formula 1 is not as popular as some sports in the US, but it is steadily gaining traction in America. Currently, the United States stands in sixth place when it comes to countries with the highest levels of F1 viewership. However, the US is known for having very high levels of attendance at F1 races held in the country itself. For example, the United States Grand Prix is the highest-attended race on the Formula 1 schedule, bringing in approximately 400,000 fans to view the race in person, more than twice the average number of fans from other non-US Formula 1 races.

Pages Related to Where Is Formula 1 Most Popular?