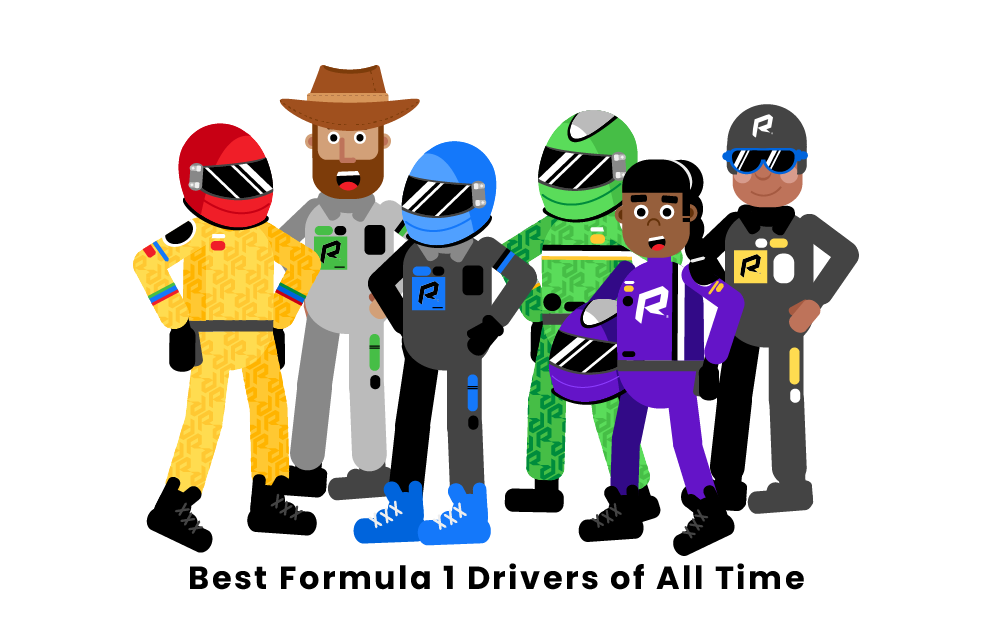 Formula One is the pinnacle of motorsport, the world’s highest level of open-wheel racing. The series attracts the best drivers and the biggest personalities, who in turn have become some of the most successful and beloved athletes in the world. Here is a list of the best Formula One drivers to get behind the wheel.

Who are the best Formula 1 drivers of all time?

A modern-day legend and the winningest driver in Formula One history, Lewis Hamilton has seven World Drivers’ Championships, tied with Michael Schumacher for most titles. Hamilton holds the record for most pole positions, most podium finishes, and most wins in Formula One. He is also the first and only black driver to compete in the series. Hamilton grew up in Hertfordshire, England, and joined the McLaren young driver program at 13. This provided the chance to go Formula One racing for McLaren in 2007. Hamilton made the most of his opportunity with one of the most dominant rookie seasons in history. He finished second in the championship, only losing by a point. Four years later, Hamilton moved to Mercedes, where he won six championships, four of which were won consecutively from 2017 to 2020. Hamilton is still racing today.

A dominant force on the racetrack, Michael Schumacher’s seven World Drivers’ Championships ties him for most of all time with Lewis Hamilton. Growing up in Germany, Schumacher started kart racing at age six on the local kart track that was operated by his father. He was racing professionally full-time at 18 and made it to Formula Three at 21. Just one year later, he made his Formula One debut, driving for Jordan. He quickly moved to Benetton, winning two championships, then to Ferrari, where he won five consecutive championships starting in 2000. After retiring in 2006, Schumacher returned to Formula One from 2010-2013 but only achieved one podium finish. In 2013 he suffered a severe brain injury in a skiing accident and has been recovering ever since.

One of the sport’s greatest and winningest drivers, Alain Prost was known for his patience and precise driving, earning the nickname “The Professor.” He was also known for feuding with his teammates, opponents, and team management. An active boy who played several sports, Prost grew up in the Loire Valley of France and discovered karting at 14, which he took up as a hobby. It quickly became an obsession, and he left school at 19 to pursue racing full time. Prost won the French and European Formula Three championships, then moved to Formula One, driving for McLaren. With McLaren, Prost cultivated his most infamous feud with teammate Ayrton Senna, who was the crowd favorite. Over his career, he won four World Championships and 51 races, making him one of the most successful drivers of all time.

Ayrton Senna was one of the most beloved, successful, and dedicated racing drivers of all time. Senna grew up in a wealthy family in Sao Paulo, Brazil, and became obsessed with a miniature go-kart his father gave him at the age of four. He started racing karts at age 13, winning his first race. Despite pressure from his father to give up racing and join the family company, Senna continued. He moved up to Formula F in 1981, Formula Three in 1983, and made his Formula One debut in 1984. Obsessive and highly competitive, Senna quickly dominated Formula One, taking home the Drivers’ Championship three times between 1988 and 1991. Senna was killed suddenly in a crash at the 1994 San Marino Grand Prix. It was a loss the racing world still mourns today.

The youngest Formula One driver to win a championship, Sebastian Vettel holds the record for most consecutive race wins and most wins in a single season. Vettel grew up in Germany and started karting at age 8. He joined the Red Bull Junior Team at 11, then went open-wheel racing at 16, winning the 2004 Formula BMW ADAC championship the next season. After racing in Formula 3 Euro and Formula Renault 3.5, Vettel got a test driver gig for BMW’s Formula One Team, where he made one start. Then in 2007, he was picked up for a full-time ride with Toro Rosso, becoming the youngest to win a Formula One race at 21. Vettel was promoted to Red Bull, winning four consecutive championships starting in 2010. Vettel moved to Ferrari, then Aston Martin, where he is still racing today.

Niki Lauda was an Austrian racing legend who went on to become a successful aviation entrepreneur. Cut off from family support, he parlayed a series of loans to finance his racing career, moving up from Formula Vee to Formula One in four short years. Lauda won his first world championship in 1975, driving for Ferrari. The next season he crashed at the Nurburgring and suffered life-threatening burns and injuries. He made a miraculous recovery and returned in six weeks, only missing the championship by one point. In 1977 Lauda was back in full form, winning his second championship. Lauda retired in 1985, the year after winning his third and final championship. He went on to found and run three airlines, as well as serving as manager, consultant, and part-owner of several Formula One teams.

Who is the greatest Formula 1 driver of all time?

Lewis Hamilton is the greatest Formula One driver of all time. He holds the record for most pole positions, most podium finishes, and most wins. Hamilton is the only driver with over 100 wins, and he is still racing and adding to the total. He has won seven World Drivers’ Championships, tied for most of all-time with Michael Schumacher. However, Hamilton has won over 33% of the races he entered, while Schumacher only posted a 29% winning percentage during his career. By all metrics, Hamilton is clearly the greatest.

Which Formula 1 driver has won the most championships?

The Formula One drivers who have won the most championships are joint record-holders Michael Schumacher and Lewis Hamilton. Both drivers have seven World Drivers’ Championships to their name. Schumacher set the record first, winning back-to-back titles in 1994 and 1995, then stringing together five consecutive championships from 2000 to 2004. Hamilton won his first championship in 2008 and took home two more in 2014 and 2015. He then won four consecutive titles between 2017 and 2020. Hamilton is still racing, so he very well may take sole possession of this distinction in due time.

Which Formula 1 driver holds the record for most wins in a season?

Two Formula One drivers share the record for most wins in a season: Michael Schumacher and Sebastian Vettel. Both drivers achieved this record by winning 13 races. Schumacher won 13 races during the 2004 season, which spanned 18 races. Nine years later, Vettel won 13 races during the 2013 season, which was one race longer at 19 races. This means that Schumacher’s season had a higher winning percentage, at 72%, while Vettel won just over 68% of the races in his 13-win season.