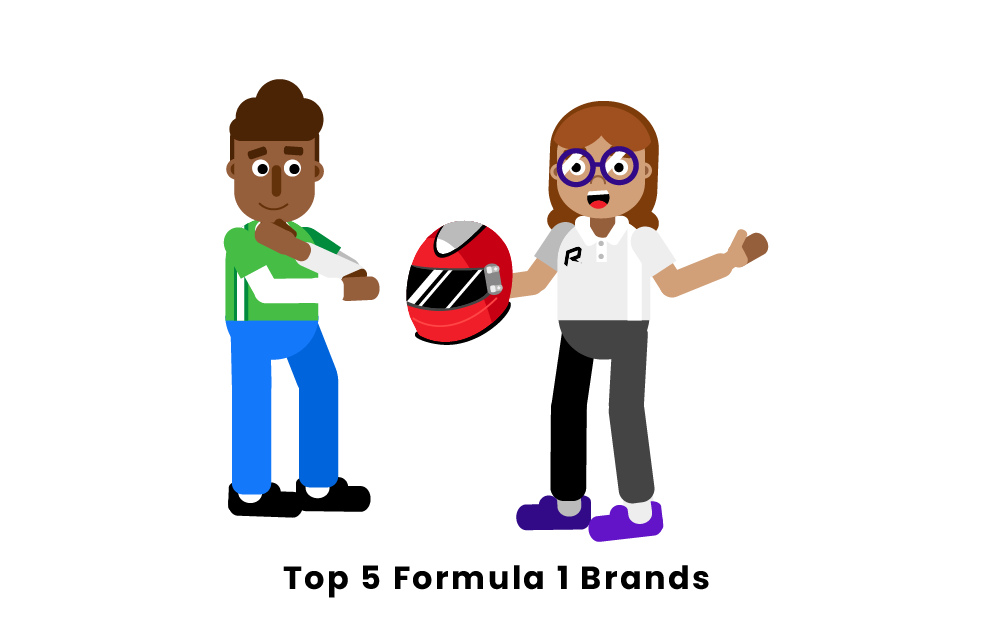 What Are the Most Popular Formula 1 Brands?

Ferrari is the brand most commonly associated with Formula 1. The sports car manufacturer has its own affiliated team in the Formula 1 grid, Scuderia Ferrari, whose cars bear the unmistakable Ferrari red, known as “rosso corsa.” Scuderia Ferrari has not only a long history in the sport but a very successful one as well. In addition to its own team, Ferrari also sells its engines to other teams that don't have the means to produce their own engines.

Besides racing gear, Ferrari also has its own apparel line, which is widely popular among racers and Formula 1 fans. At every Grand Prix, there are fans wearing red Ferrari shirts, hats, and shoes and waving Ferrari flags around. The Italian Grand Prix, held in Monza, is the race where the Ferrari brand is the most visible. All that makes Ferrari the most popular brand in Formula 1.

Mercedes-Benz, or simply Mercedes, is a vehicle manufacturer that builds cars and other vehicles such as trucks and buses. It is one of the premier brands in Formula 1. The company was founded in 1926, and its racing roots trace back to the 1930s. The brand debuted its Formula 1 team in 1954, winning the world championship but withdrew from motor racing after a tragic accident one year later. The company kept its foot in Formula 1 by providing engines to some F1 teams, like McLaren and Williams, being direct contributors to these team's success despite not having a team of their own. That would change in 2010 when it returned to the series as Mercedes AMG Petronas.

In 2014, with iconic drivers Nico Rosberg and Lewis Hamilton, Mercedes re-established itself as a premier F1 brand, winning the World Championship for the first time in 60 years. The team hasn't stopped winning since, and it is impossible to talk about Formula 1 without mentioning Mercedes.

Famous energy drink company Red Bull owns two Formula 1 teams that are associated with its brand and has found enormous success with both teams. Red Bull first got into Formula 1 in 2004, starting the Red Bull Racing Team. The company started a second, Italian-based team in 2006 and named it Toro Rosso, which means Red Bull in Italian. While many thought that the team would simply be a marketing tool to sell more cans of Red Bull, that couldn't be further from the truth.

While Red Bull Racing has been widely successful since its foundation, winning four Drivers’ and Constructors’ World Championships. In 2020, Red Bull opted to change its second team's name from Toro Rosso to AlphaTauri, which is the company's clothing line. While AlphaTauri hasn't had the power to contend for titles, they have certainly been competitive, achieving podiums and sponsoring Formula 1 talent such as Sebastian Vettel, Daniel Ricciardo, and Max Verstappen. Formula 1 provides great exposure for the Red Bull brand, while they provide F1 with fast cars and great drivers.

Pirelli is one of the premier tire manufacturers in the world. Not surprisingly, they are the brand that supplies all 10 Formula 1 teams with all their tires for all their races. Given the important role that tires play in Formula 1, it is impossible to separate Pirelli's brand from the F1 brand. Pirelli produces five types of tires for Formula 1 teams: soft, medium, hard, intermediate, and wet.

In addition to seeing the Pirelli logo and name on all cars, the company also has signs around the track at each Grand Prix, and provides useful information to television commentators during races, which are often mentioned during broadcasts. With a strong presence in such an important part of the sport, Pirelli is one of the top F1 brands.

Puma is not necessarily a racing or Formula 1 brand like Ferrari or Pirelli. However, Puma is present in all kinds of sports, which includes motorsports and Formula 1. Puma makes its presence in Formula 1 in two different ways. First off, they produce and sell apparel for three of the most important Formula 1 teams, whose brands have all also appeared in this list: Ferrari, Mercedes, and Red Bull. You can see these teams’ drivers wearing team hats and shirts with the Puma logo, which can also be bought by fans. Secondly, Puma also provides drivers with some of their racing gear, producing racing gloves and racing shoes. If you are watching a race and pay attention to the details, Puma's logo might appear more than you expect.

As a watchmaking company, Rolex might not be a brand that many people expect to see involved in Formula 1 racing, but it plays an important role in the sport, one which is often overlooked. Beginning in 2013, Rolex signed an official contract with Formula 1, which made the brand F1’s official timekeeper for their races, replacing former timekeeping affiliate Hublot, which F1 had partnered with in 2010. Among Rolex’s many driver sponsorships on the F1 circuit was Sir Jackie Stewart, a three-time FIA Formula 1 Drivers’ World Champion. Other drivers Rolex sponsors include Mark Webber and Nico Rosberg.

Renault has been involved with Formula 1 from the very start, with one of the brand's cars (the Renault AK) winning the 1906 Grand Prix de l’Automobile Club de France. After that first win, however, Renault left F1 for 70 years, only returning to the sport in 1977 and winning its first notable victory in 1979. The company was an engine supplier for Formula 1 from 1977 to 1986 and again from 1989 to 1997. In 2000, Renault bought the Benetton Team for around $120 million, maintaining it through its renaming as Lotus Grand Prix in 2012. Renault also supplied engines to fellow F1 team Red Bull Racing. In 2021, Renault again rebranded its team, naming it after their sporting line, Alpine. The team currently employs drivers Fernando Alonso and Davide Brivio.

Heineken is one of the biggest sponsors in Formula 1. They signed a massive endorsement deal with the series in 2016, worth $200 million. Heineken is the title sponsor for three F1 races: the Dutch, Austrian, and Sao Paulo Grands Prix. The brand enjoys prominent trackside advertisements at every race. Heineken is one of several alcohol brands with a presence in F1. Uniquely, Heineken uses the platform exclusively to promote its alcohol-free beer, using the slogan “when you drive, never drink.”

What F1 car brands compete in the series?

The car brands that compete in F1 are Mercedes, Ferrari, Renault (Alpine), McLaren, Aston Martin, and Alfa Romeo. Each of those carmakers sponsors Formula 1 teams and manufactures chassis for competition. Not all of them manufacture their own engines, as the only power unit suppliers are Mercedes, Ferrari, Renault, and Honda. Notably, Honda supplies engines to Red Bull and AlphaTauri but does not sponsor a team.

Which Formula 1 car manufacturers compete for the championship?

The car manufacturers that compete for the World Constructors’ Championship are Red Bull Racing, Ferrari, Mercedes, McLaren, Renault (Alpine), Alfa Romeo, Aston Martin, Haas, AlphaTauri, and Williams. Although all of those manufacturers build chassis and are eligible to compete for the chassis constructor title, the World Constructors’ Championship goes to the engine maker if it is different from the chassis maker. The only engine makers competing are Mercedes, Ferrari, and Renault (Alpine).

What are the best F1 car brands?

The best F1 car brands in terms of success in the series are Ferrari, McLaren, and Mercedes. Ferrari has been the most successful F1 brand, with an impressive 16 World Constructors’ Championship titles and 15 World Drivers’ Championships. Other notable car brands that have seen success over the years in Formula 1 are Renault (Alpine), Honda, and Lotus. Alfa Romeo and Aston Martin build excellent consumer cars, but their F1 teams have seen limited success in the series.