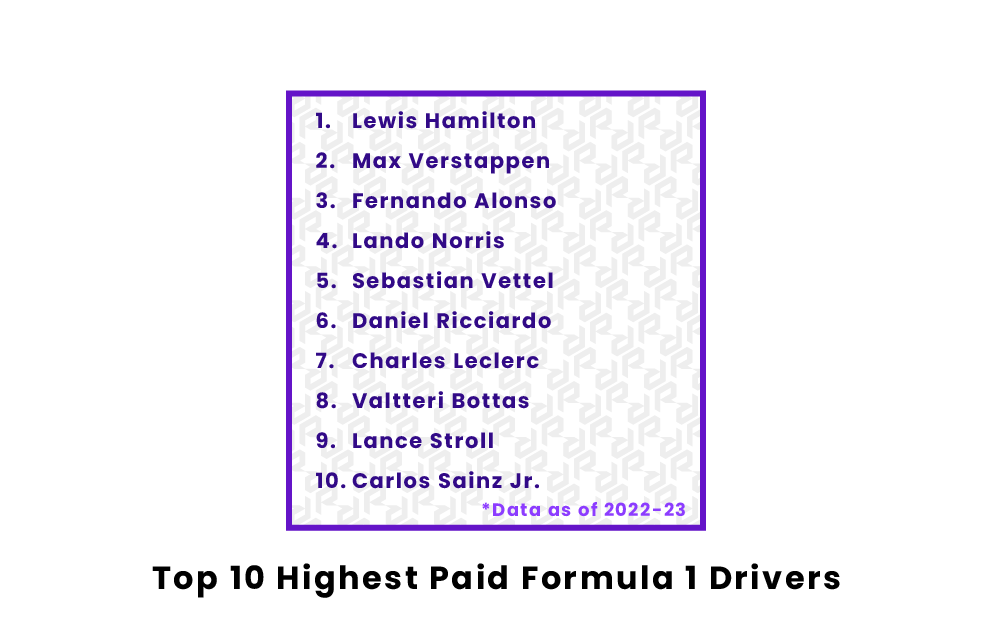 Formula 1 is a sport where money is king. Unlike some other major sports, Formula 1 teams are allowed to spend as much as they like on driver salaries so long as they stay under an annual budget cap for cars, parts, and operations. This means that the best teams are often the ones with the highest budgets, which also means they can pay better drivers. Listed below are the ten highest paid drivers in all of Formula 1.

Who are the Highest-Paid F1 Drivers in the World?

Lewis Hamilton is the highest paid driver in F1, earning $40 million every year as a driver for the Mercedes Formula 1 team. Lewis Hamilton will also go down as one of the best drivers in the history of motorsport, let alone Formula 1. Hamilton has seven F1 world titles to his name, with his first coming in 2008 and his most recent in 2020. Over the course of his long career, Hamilton has amassed 103 career wins, the most in F1 history.

With the Red Bull Racing team, Max Verstappen makes a whopping $25 million every year. Verstappen made his Formula 1 debut in 2014 with the Toro Rosso team and was clearly one of the most promising young talents in the sport. Verstappen was promoted to the Red Bull team in 2016 and found quick success. This culminated in a heated title fight with Lewis Hamilton in 2021, which saw Verstappen take home the championship in a controversial Abu Dhabi Grand Prix, the final race of the year. He then won his second world title the following year.

Fernando Alonso makes $20 million annually with the Alpine F1 team. The Spaniard’s salary is unsurprising as he has been one of the most consistent F1 drivers throughout his lengthy career. In 2022, Alonso even passed the legendary Kimi Räikkönen for the most race starts in Formula 1 history (with 353 in total). Alonso also won back-to-back championships in 2005 and 2006 and has 32 total wins over the course of his career. His handsome contract with the French F1 team, Alpine, is thanks to Alonso’s many years of experience and continued success in the sport.

As a driver for McLaren, Lando Norris is tied in salary with Fernando Alonso, earning $20 million per year. Having gotten his first start in 2019, Norris is without a doubt one of the most promising new talents in Formula 1. Thus far into his career, Norris has found the podium six times but has remained without a win. He’s also secured one pole position and four fastest laps, coming from only 80 race starts. McLaren pays Norris such a hefty contract for the very clear potential that the young driver shows.

Sebastian Vettel earns $15 million annually as a member of Aston Martin’s Formula 1 team. 2022 will be the final season of Vettel’s long and storied career, which saw him win an incredible four championships in a row with Red Bull between 2010 and 2013. It was a run of dominance that is rarely seen in the sport, but it shows just how strong of a driver he is. Vettel has also stood on the podium at 53 Grand Prixs and has secured 57 pole positions.

Each year, Daniel Ricciardo makes the same as Sebastian Vettel, earning $15 million as a driver for McLaren. Being an absolute fan-favorite for most of F1, Daniel Ricciardo adds a very real marketing appeal to his world-class driving skills. Ricciardo has managed to secure a podium finish in 32 out of his 230 race starts. Out of those 32 podiums, eight were wins. He has also finished 16 races with the fastest lap and has started on the pole on three occasions.

As another one of Formula 1’s promising young names, Charles Leclerc is annually paid $12 million by the Scuderia Ferrari F1 team. Out of his 99 career race starts, Leclerc has found the top step of the podium five times, three of those wins coming in 2022 when he was a real threat to Max Verstappen’s dominance early in the season. Leclerc will hope to add to his 23 total podiums and 827 career points

As a member of the Alfa Romeo F1 team, Valtteri Bottas earns $10 million every year. Bottas had also earned a strong reputation as the second driver on Mercedes alongside Lewis Hamilton, where the pair of drivers dominated for many years. Bottas has ten career wins to go along with a strong 67 total podiums. Bottas has also started the race as the pole-sitter 20 times and has secured 19 fastest laps. Now with Alfa Romeo, Bottas is paid for his wealth of experience in the sport.

As the current teammate to Sebastian Vettel at Aston Martin, Lance Stroll makes $10 million every year. Stroll is still figuring out how to find consistent success in F1 but shows great potential at only 24 years old (as of the 2022 season). Stroll began his career in the sport in 2017 with Williams Racing and then moved to Racing Point, which was purchased by his father, Lawrence Stroll. Racing Point eventually became Aston Martin, for which Stroll currently races. He’s found the podium three times so far and has secured 189 total points.

Tied with both Bottas and Stroll, Carlos Sainz Jr. makes $10 million every year with the Scuderia Ferrari F1 team. Sainz has had an upward trajectory in his career that landed him a contract with Ferrari, one of the most prestigious teams in all of motorsport. Sainz shows immense promise on the track, having secured one win, 14 podiums, three pole positions, and three fastest laps in only 159 career starts. His first win came at the legendary Silverstone track in the UK, and he hopes to add more wins to that total in future seasons.

Who is the highest-paid F1 Driver in the world?

The highest-paid F1 driver in the world is Lewis Hamilton, earning $40 million per year. Hamilton is a seven-time Formula 1 champion and currently drives for Mercedes, who pay him such a large salary for his unparalleled excellence. He holds the record for most total Grand Prix with 103. Hamilton also has 190 podiums, 103 pole positions, and 61 fastest laps, which he earned over the course of 307 career starts. Among the racing community, the name Lewis Hamilton is synonymous with legend, and he is paid as such.