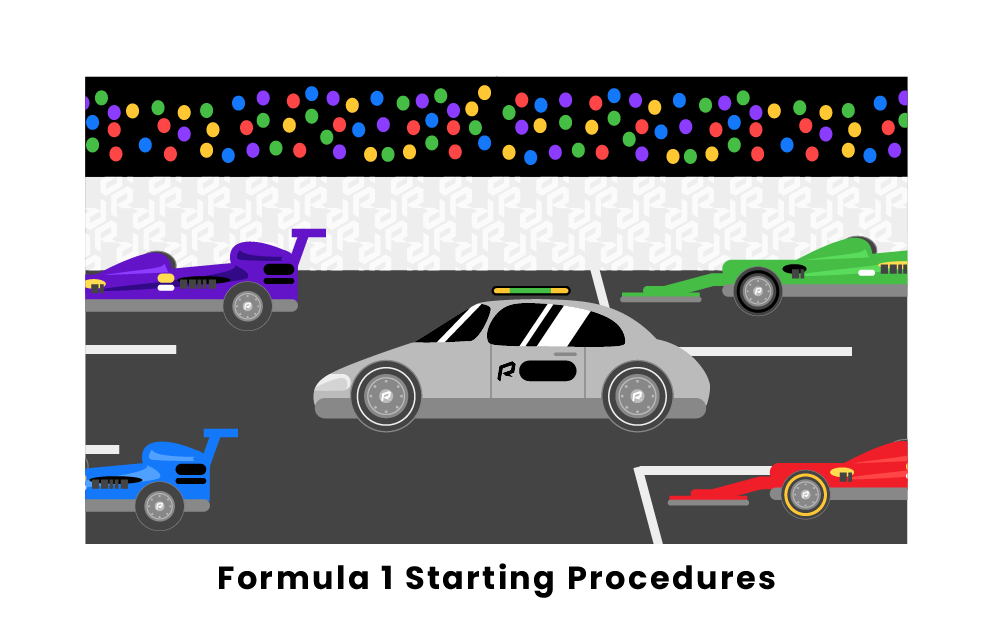 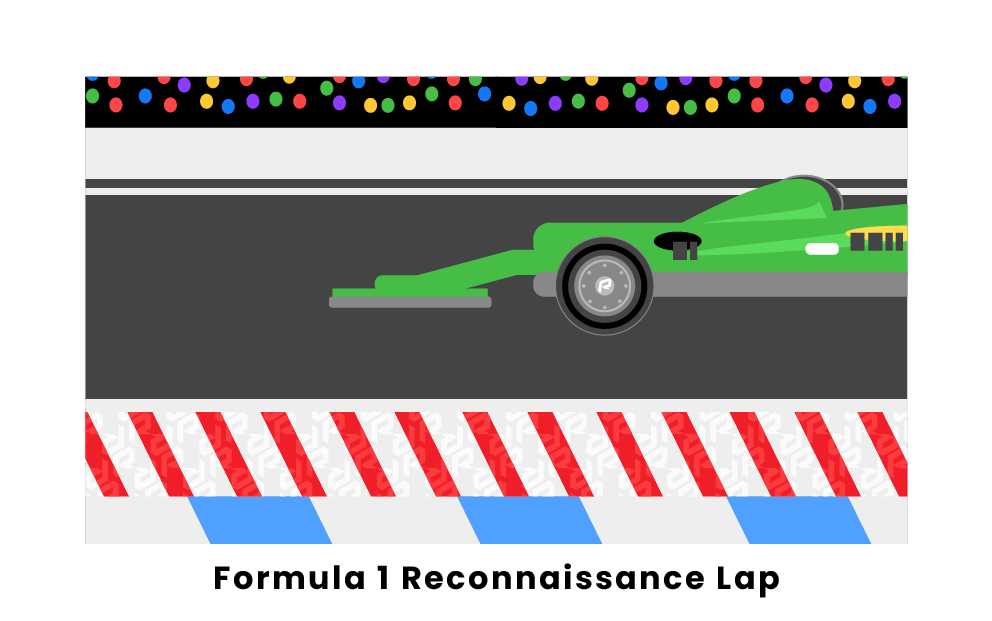 The first part of the Formula 1 starting procedures is the “reconnaissance lap.” This is a lap—or laps— around the track that drivers must make before the formation lap. The purpose of performing a reconnaissance lap is to assess the car’s handling and the track conditions, then have a final opportunity to make adjustments in the pits.

After completing their reconnaissance laps, all drivers who are permitted to start from the grid take their positions on the grid and stop their engines.

After the 10-minute reconnaissance period ends, the exit to pit lane is closed, with 30 minutes remaining until the start of the formation lap. Any cars still in the pits at this time will be forced to start from pit lane. 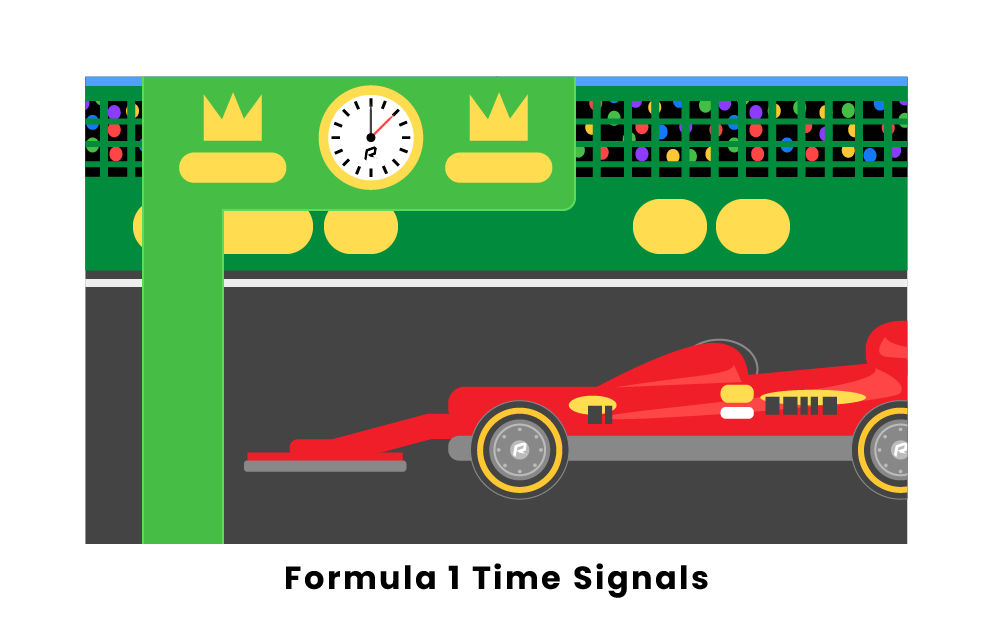 Visual and auditory signals are given in the pit and grid areas to alert competitors to the impending start of the race. The first of these signals happens 32 minutes before starting the formation lap to warn drivers that pit lane is closing in two minutes. The next signal is given two minutes later, signifying that the pits are now closed, and there are 30 minutes until the start of the formation lap.

Similar signals are shown and sounded at 10 minutes, five minutes, three minutes, one minute, and 15 seconds before starting the formation lap. At the 10-minute signal, everyone except drivers, team technical staff, and officials must leave the grid.

Following the three-minute signal, all cars must have their wheels attached. After this point, any wheel removal must be done in pit lane, not on the grid.

At the one-minute signal, the signal is given for the drivers to start their engines. By the time the 15-second signal is shown, all technical staff must be off the grid, taking all of their equipment with them.

Also known as the parade lap, the formation lap is a single lap around the track that immediately precedes the race. The entire field runs the parade lap together, maintaining tight and constant intervals between the cars and staying in the order of their pole positions.

The main purpose of running the formation lap is to allow the cars’ engines, gearboxes, fluids, brakes, and tires to heat up to optimal operating temperatures. Warming the tires is the primary reason that you will see drivers swerve left and right during the formation lap. The horizontal friction caused by swerving creates heat, increasing the available grip in the tires at the start of the race. The formation lap also gives the drivers one last chance to scout passing zones and assess track conditions. 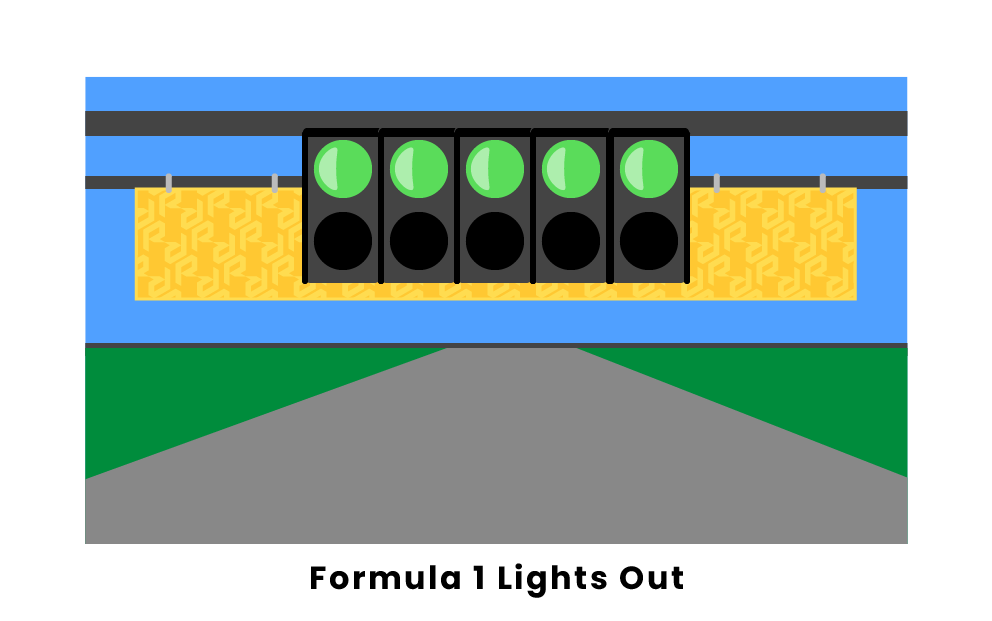 Once the field has completed the formation lap, the cars return to the grid again. The drivers stop in their grid positions and leave their engines running. At this time, all of the red and green starting lights are illuminated.

Then, a five-second countdown begins, with each second passing being marked by turning off one of the five pairs of red starting lights. When there is only one pair of red lights still illuminated, an automated system waits a randomly-determined amount of time between zero and one second, then extinguishes that final pair of red lights. This system prevents drivers from anticipating the exact moment of the race’s start to make starts more fair and competitive.

Once the last pair of red lights have been turned off, only the green starting lights are still illuminated; this is the signal to the drivers that the race has started. The drivers speed away, and the race is on!

What is a reconnaissance lap in F1?

How long before a race is the reconnaissance lap carried out?

How do F1 start lights work?

F1 start lights work with five pairs of red lights turning off at one-second intervals until they are all turned off. Once the final pair of red starting lights has been turned off, the race has officially begun, and drivers may pull away from the grid. Five green starting lights are illuminated prior to the start and throughout the race. The only time the green lights are extinguished is under safety car conditions, during which a row of flashing yellow lights is shown.