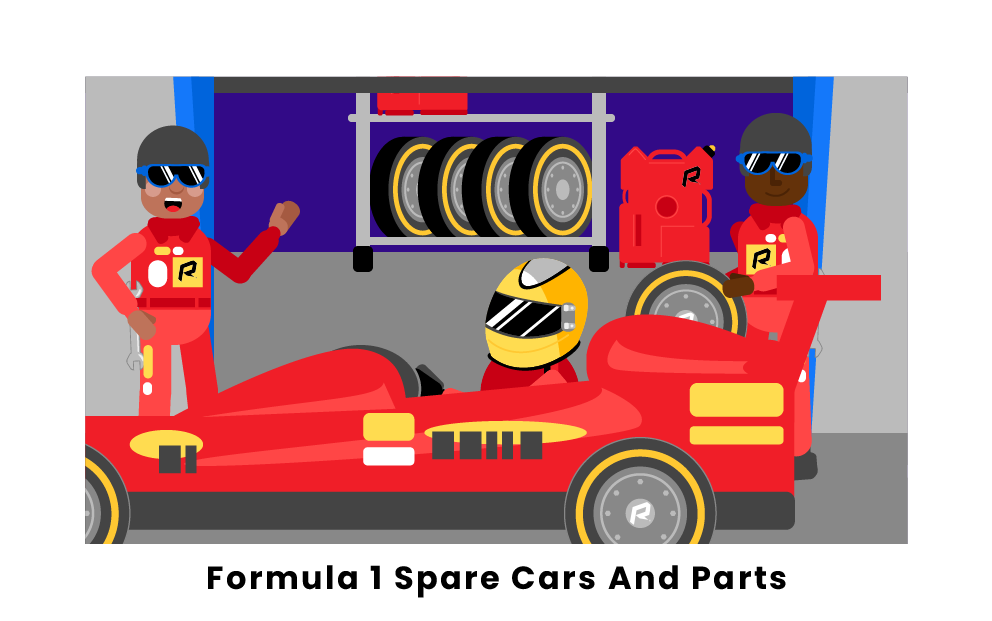 Formula 1 can be a dangerous sport, with cars and components subject to high speeds and heavy force loads. To ensure driver safety, the FIA inspects and monitors every car and part, including the spares that teams keep on hand, ensuring that they comply with the current technical regulations. In the interest of making the inspection process manageable and preventing cheating, teams must follow restrictions when preparing and utilizing their backups. Keep reading for some of Formula 1’s spare cars and parts rules. 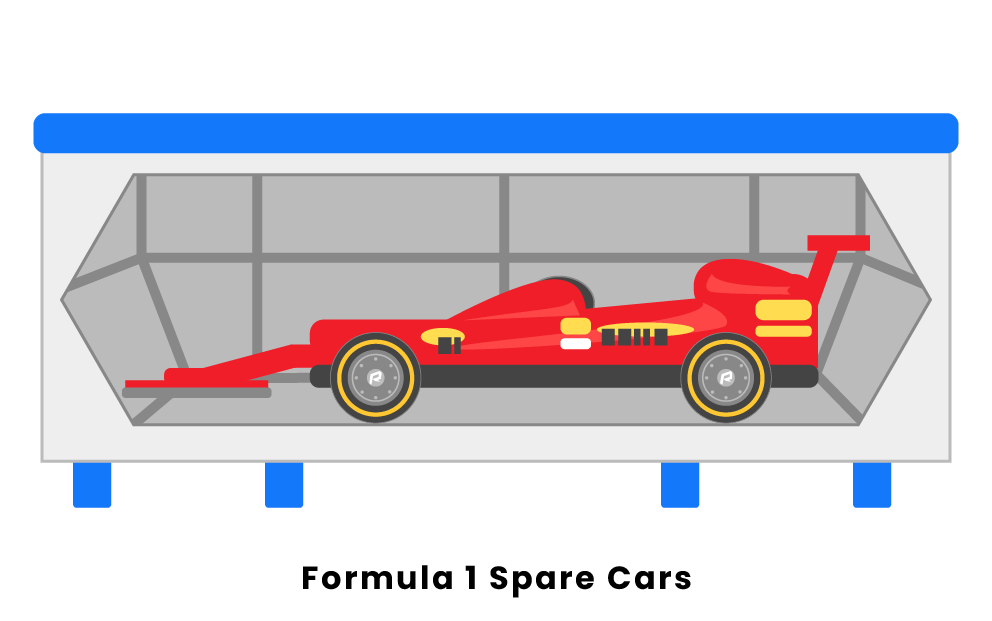 Teams in Formula 1 are not allowed to have spare cars available at events. Each team is only allowed to use two cars at a time–one for each of their two drivers. They must use the same car in every race and all practice and qualifying sessions.

This wasn’t always the case, as teams would traditionally keep race-ready backup cars at the track. Known as “T-cars,” a driver could jump in one of these backups at a moment’s notice after crashing out. The FIA outlawed T-cars in 2008 in a set of rules aimed at decreasing teams’ operating expenses, limiting the total weight of spare parts that may be brought to the track.

As a result of the two-car rule, teams must keep enough spare parts on hand to assemble an all-new car at the track. In the case of a catastrophic wreck during a practice or qualifying session, teams are forced to do just that. Then after building a whole new car and getting it inspected, the driver must start the race from the back of the grid. 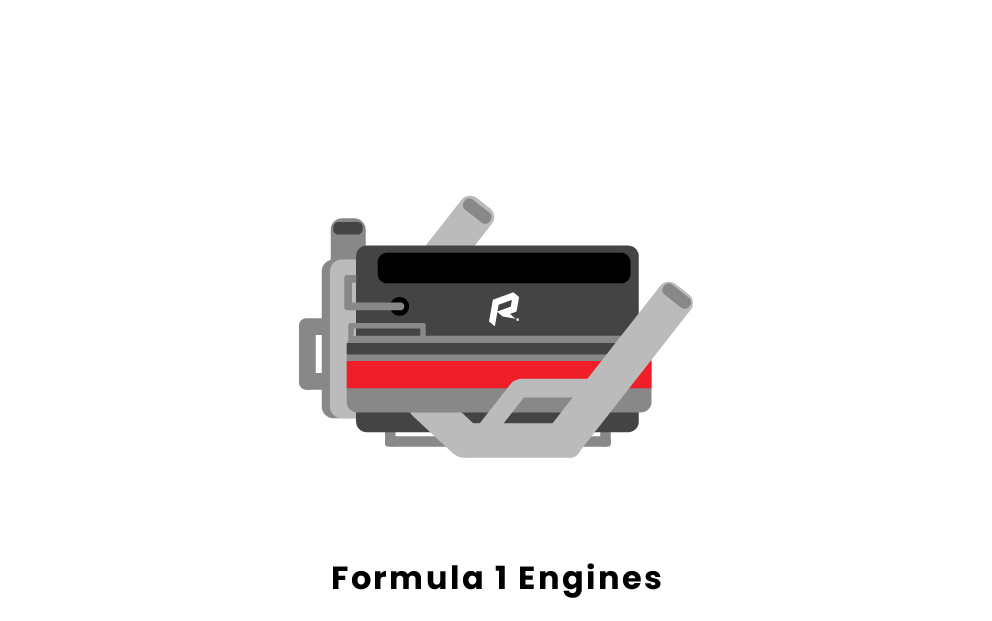 Teams also must follow strict rules regarding their use of spare engines. For each of the seven elements that make up a Formula 1 power unit (the technical name for the overall hybrid engine system), there is a maximum number that each driver is allowed to use during a season without penalty. Drivers are limited to three engines, turbochargers, heat generators, and kinetic generators; two hybrid batteries and engine computers; and eight exhaust systems.

If a team uses more than their limit of any power unit element for a particular driver, that driver will be assessed a grid penalty at the first race in which that additional element is used. For the first infraction, the driver receives a 10-position penalty; and for the second, they are only penalized five grid positions. However, beginning with the third power unit part over the limit, each subsequent violation results in the driver starting at the back of the grid.

Power units are allocated to drivers, but the limits really apply to the teams. This is because if a driver is replaced midseason, the substitute driver will adopt the old driver’s tally of used power unit elements.

Teams are not allowed to repair or make changes to any engines (including spares) between race weekends. After races, every power unit used during the weekend is subject to post-race inspections. Once a power unit is inspected, a scrutineering official puts a seal around each element, preventing the engine from being started or any work from being done on its parts. The seals are not allowed to be removed until 22 hours prior to the initial practice session of the next race.

The power unit is not the only system on a Formula 1 car with rules limiting the number of spare parts that can be used. Teams are also restricted in the number of transmissions or gearboxes they may use in a particular driver’s car during a season.

Like the power unit elements, teams are permitted to use a maximum number of each restricted-number component per driver without incurring a grid penalty. Each team is allowed to use four of each RNC for each driver during the season. If they are forced to use additional RNCs, the affected driver will be assessed a five-position grid penalty at the first race in which the part is used. This penalty stays the same regardless of the number of violations.

Unlike the power unit elements, teams are allowed to perform maintenance and repairs to the RNCs that make up the gearbox assembly between races. However, any work done on RNCs between race weekends must be previously authorized by the FIA and disclosed to all of the other teams. Teams performing such work must keep detailed records of what was done, including part numbers and photographs.

Do F1 drivers have spare cars?

F1 drivers do not have spare cars. While teams keep backup cars at their home garages, they are only permitted to bring one car for each driver to a race weekend. Although parts may be changed and repairs may be made, each driver must use the same race car chassis from the first practice to the final lap of the Grand Prix. For this reason, teams keep enough spare parts on hand at a race weekend to effectively rebuild a new car from the ground up.

How many spare parts do F1 cars have?

Generally, Formula 1 teams carry enough spare parts to rebuild or repair two F1 vehicles to a race. There are certain limitations in the F1 rules regarding how many of a certain kind of part a team can bring with them to a Championship Race, however. These rules stipulate that an individual driver can use no more than three engines, six motor generator units (three heat and three kinetic), three turbochargers, two energy stores, two control electronics, and eight of the four elements that make up an engine exhaust system.

What happens to F1 parts after a race?

After an F1 race, hundreds of individual parts are stripped from the car and returned to the team’s home garage. At their team base, each part goes through a series of advanced non-destructive tests to ensure its integrity. Examples of such tests include magnetic particle inspection (MPI), eddy current inspection, and dye penetrant inspection. Once the parts have passed their relevant inspections, they are cleared to be reattached to the cars and used in upcoming sessions and races.