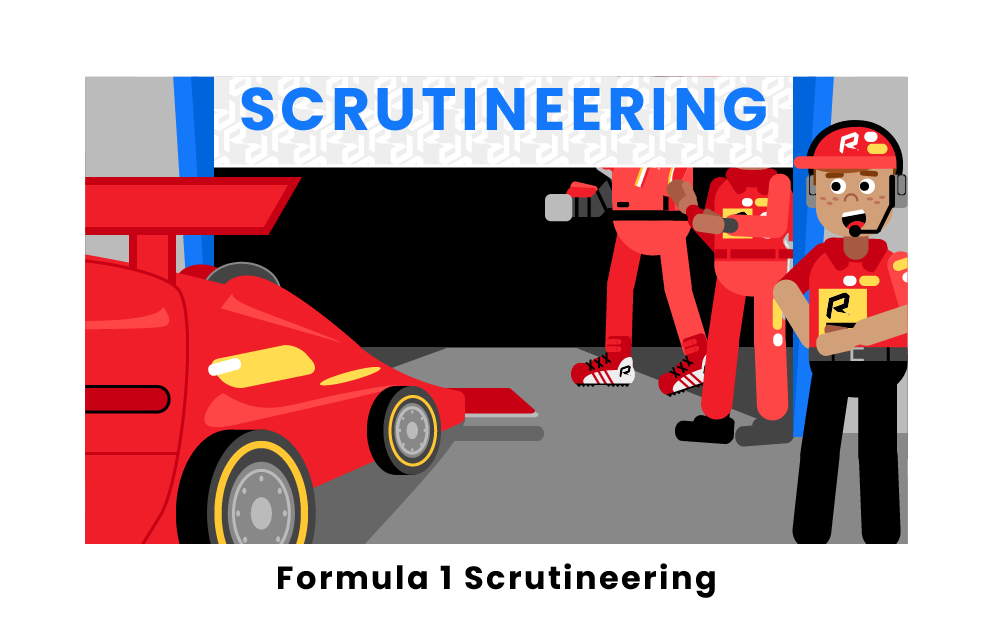 Scrutineering is a general term referring to any official inspection that ensures compliance with standards or regulations, such as in the scrutineering of election results. Formula 1 more narrowly defines scrutineering as the technical checking of cars by officials to verify that the cars conform to regulations.

The purpose of scrutineering is twofold. More importantly, it maximizes driver safety by confirming that all cars, parts, and gear comply with technical regulations. This confirmation helps prevent putting drivers in dangerous situations due to underperforming, unapproved components that fail under race conditions. Secondly, scrutineering prevents and punishes cheating, ensuring that no team gains a competitive advantage by using parts or configurations that are not permitted under the technical regulations.

The actual process of scrutineering in Formula 1 involves more than simply inspecting the cars. Throughout the race weekend, scrutineers inspect all the parts and systems present on the cars, as well as spare parts waiting to be used and damaged parts that have been removed from cars. They examine the equipment, tools, and devices used by the race teams in their pits and garage areas. Scrutineers even inspect the driver’s gear, clothing, jewelry, and underwear to ensure they are not in violation.

The scrutineers are volunteer race marshals specializing in vehicle inspections, which the FIA selects for each race. There are specialists within the pool of scrutineers who focus on particular parts, systems, or measurements.

Scrutineers are granted several unique powers. They may check a car at any time during an event and may require a competitor to dismantle any car so that they may inspect it to their satisfaction. Scrutineers may request spare parts or samples from a competitor so they may assess them. If scrutineers incur any reasonable expenses during their inspections, they may compel the team to compensate them for those expenses. 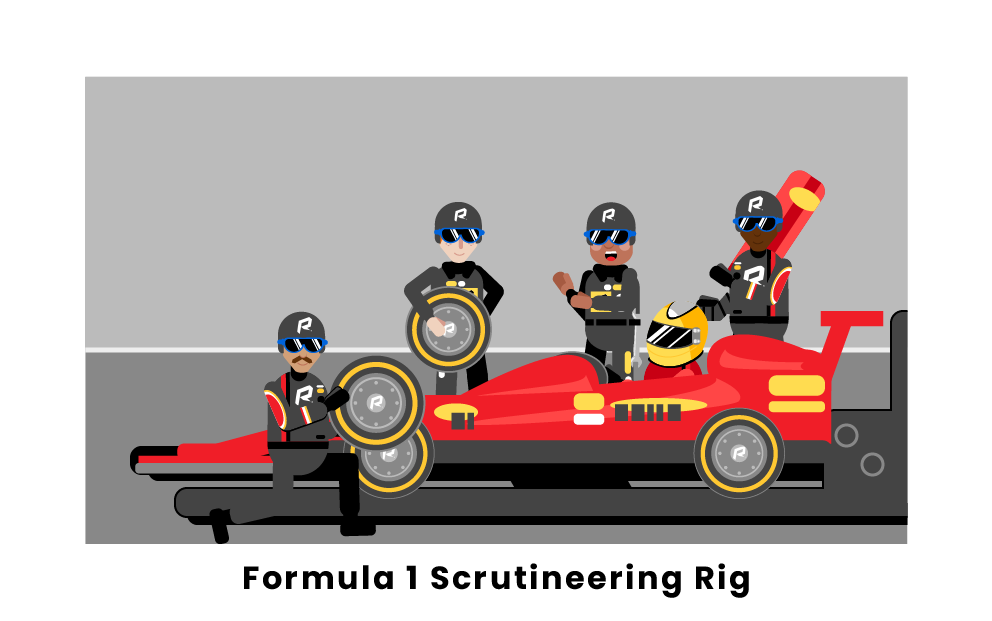 Scrutineering occurs throughout the race weekend, but the bulk of the scrutineering performed by the race marshals occurs the day before the race during a single weighing session. The inspections performed during weighing last about 20 minutes per car and occur in one of the FIA garage inspection bays.

Not every car is subject to a weighing session: select cars are chosen randomly and without warning the teams. The weighing inspections are done with a giant scrutineering rig, which the cars are driven onto. The scrutineering rig weighs the cars and uses lasers to measure every external component’s size, angle, and relative position. Scrutineers also use hand-held laser sensors to precisely measure every external surface of the cars.

Scrutineers have the right to inspect any component, tool, or piece of gear during the race weekend, especially if they have reason to suspect that item is out of compliance. However, the scrutineers follow a set schedule that dictates when most of their inspections are performed.

The first scrutineering event of the weekend takes place between two and four hours before the first practice session, which typically occurs on Friday afternoon. During these two hours, teams must submit a scrutineering declaration for each car, following the declaration form template that the FIA provides. Throughout the season, teams must share CAD diagrams and technical measurements of every part and system of their cars with the FIA. The scrutineering declaration merely certifies that the car conforms to the specifications which have already been shared with, and approved by, the FIA.

Every time cars are checked by scrutineers during the race weekend, the stewards are required to publish the findings of the scrutineers immediately. However, the results do not list specific measurements or figures unless a particular item is found to be out of compliance. In the case of a violation, a precise figure will be published.

The penalty for failing a scrutineering inspection varies widely, depending on when the violation occurs and the perceived intention of the competitor. If an item is out of compliance, but the scrutineers and stewards determine that the violation was accidentally committed (and without creating a competitive advantage), the penalty will be light. In these cases, competitors typically receive no penalty or are moved to the back of the grid. The grid penalty is applied to the current race if the violation occurs before the race; it is applied to the following race for post-race violations.

However, if the stewards determine that a competitor caused a part to be out of compliance intentionally and with the goal of gaining an advantage, the penalty for failing a scrutineering inspection is severe. The driver will nearly always be disqualified for the current race in these situations. On top of that, competitors can be penalized by taking away driver or manufacturer points. The stewards may also issue a suspension for a driver, team member, or entire team for anywhere between one race and several months. In addition, fines reaching millions of dollars may be levied against teams for deliberately using non-compliant parts or configurations.

What does scrutineering mean in F1?

Scrutineering means the inspection by officials of vehicles in F1. Scrutineering inspections are performed by specialized race stewards called scrutineers. Scrutineers are also responsible for inspecting the garage areas, including all tools and backup parts, as well as drivers’ gear, clothing, and accessories. Scrutineering ensures the safety of drivers, fans, and officials, and prevents cheating by ensuring compliance with the F1 technical regulations.

When does scrutineering take place in F1?

Scrutineering takes place throughout the race weekend according to a set schedule. The main scrutineering events are the initial scrutineering and garage checks on Friday afternoon, the pre-race parc fermé following Saturday qualifying, and the post-race parc fermé immediately following the Grand Prix on Sunday. In addition to the scheduled inspections, scrutineers observe the cars and teams throughout the weekend and have the right to inspect any part at any time.

What is a scrutineer in F1?

A scrutineer in F1 is a race marshal that specializes in inspecting vehicles, garages, and components to ensure that they comply with the rules. Like most race marshals, scrutineers are volunteers who work the entire weekend for free out of a passion for the sport. Scrutineers are selected by the FIA because of their experience in their particular field. As a result, scrutineers are specialists in car inspections and related fields such as engineering and race car mechanics.