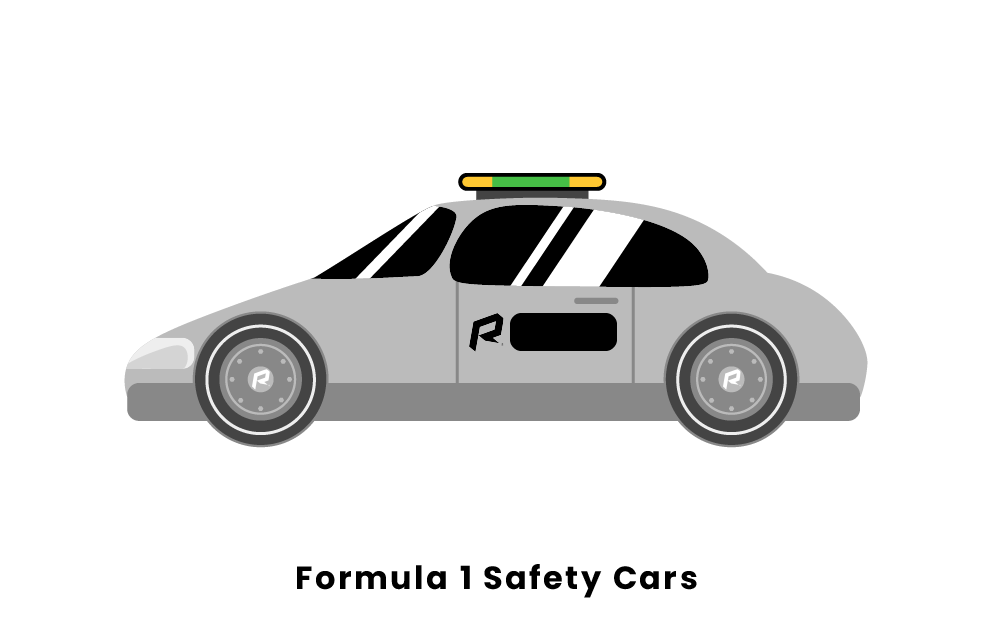 As the Formula 1 drivers zoom around the track, they are sometimes interrupted by an uninvited guest, the safety car. The safety car looks much like a sports car or even an unofficial race car, but it’s not there to race; it's there to ensure everyone stays safe when something dangerous occurs on track.

The safety car's job is to slow the competitors down and give the F1 marshalls time to resolve whatever issue has happened on the track. The safety car comes in two different models: the Aston Martin Vantage and the Mercedes-AMG GT Black Series. Read on to learn more about the safety car, how it is used, what rules the competitors must follow, and how its younger sibling, the virtual safety car, comes into play. 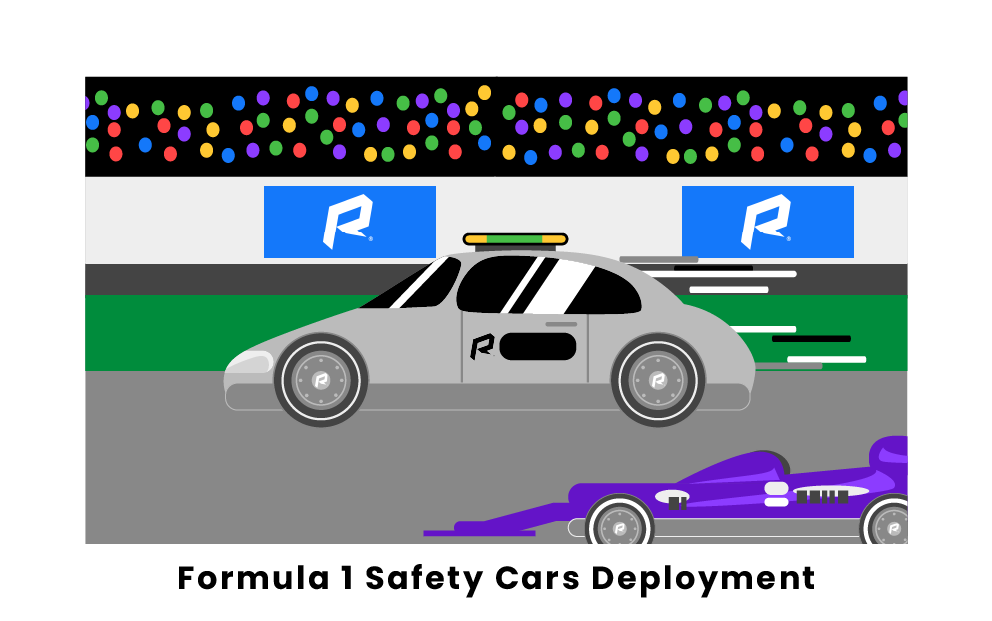 The Formula 1 safety car is utilized when there is a danger on the track, such as large debris from another car, a multi-car pile-up, or if there is a car that a crane is removing. However, it is also used at the beginning of the race to lead the formation lap, much like a pace car in NASCAR. Aside from the formation lap and danger resulting from an accident on the track, the safety car is also used when there is severe weather. While Formula One drivers do continue to compete in rainy situations, the safety car will be deployed if it is raining so heavily that it is deemed unsafe for the drivers to race at full speed.

When the safety car is deployed, all competitors will receive a notification stating “SAFETY CAR DEPLOYED,” the light panels around the track will show SC, and the track marshals will wave yellow flags on the side of the track. In cases where it is too dangerous for the cars to continue to stay on track, the safety car will not be utilized, and the race clerk will call a suspension of competition, forcing drivers to park their cars in place. 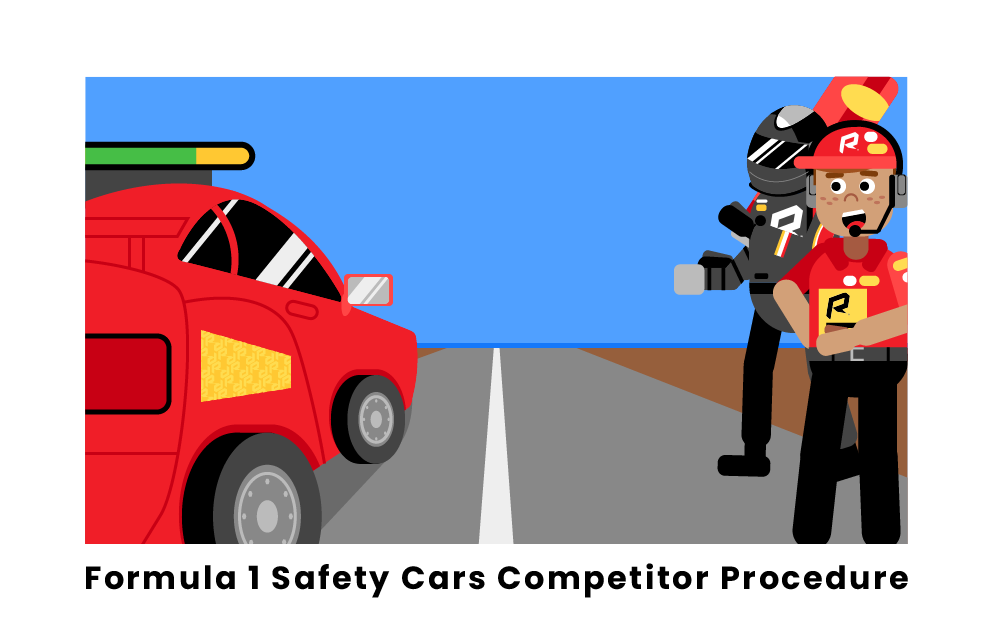 The safety car has flashing orange lights that are easily visible to the competitors when first coming onto the track. No competitor is allowed to overtake another car once the safety car is on track. The safety car will lead the remaining cars away from the dangers on the track and require them to reduce their speed. Cars must stay within ten car lengths of each other, in the same position order as when the safety car was deployed. While the cars are not allowed to race or pass one another, they will be allowed to pit if their team calls them in.

After the debris is cleared off of the track or the heavy rain has stopped, the safety car will flash a green light allowing the racers to pass it until it is driving directly in front of the race leader. This procedure allows all lapped cars to unlap themselves and line up in their respective positions behind the safety car. For example, when the safety car first comes onto the track, it may be between the number two position car and the number twenty position car. The competitor in twentieth place is allowed to pass the number two car and safety car to take up its position at the back of the pack. After all of the drivers have taken their positions accordingly, the safety car will switch back to the flashing orange lights and wait for race control to call it off the track.

Once the clerk of the course has declared the course safe for racing, the message “SAFETY CAR IN THIS LAP” is sent over the official messaging system. As the safety car approaches pit lane, it will enter the pits. Then, as the cars approach the start/finish line, a green flag and light will be shown, and the drivers make a rolling restart.

When a safety car is called onto the track, it can be one of the hardest and most crucial points of race strategy for all teams in the competition. As the race goes on, each team constantly evaluates what might happen if a safety car is deployed within the next three to five laps. The first thing they need to worry about is the car's tires. In order to function properly, Formula One tires have to be extremely hot. As the safety car slows the entire grid down, the tires on each car begin to cool, causing them to lose grip. Typically, this won’t be a big problem if the tires on the car are relatively new, but if the tires are at the end of their life span, it will be almost impossible to continue racing on them once they cool down.

The next problem that arises when a safety car is deployed is each race car’s brakes. During the laps led by the safety car, each competitor will have to be extremely cautious not to overheat their brakes. Formula One brakes are naturally cooled by the airflow created from driving fast. Once the safety car is deployed, the speed of the race is reduced by almost 60%, meaning the brakes are not getting the airflow they need to cool. 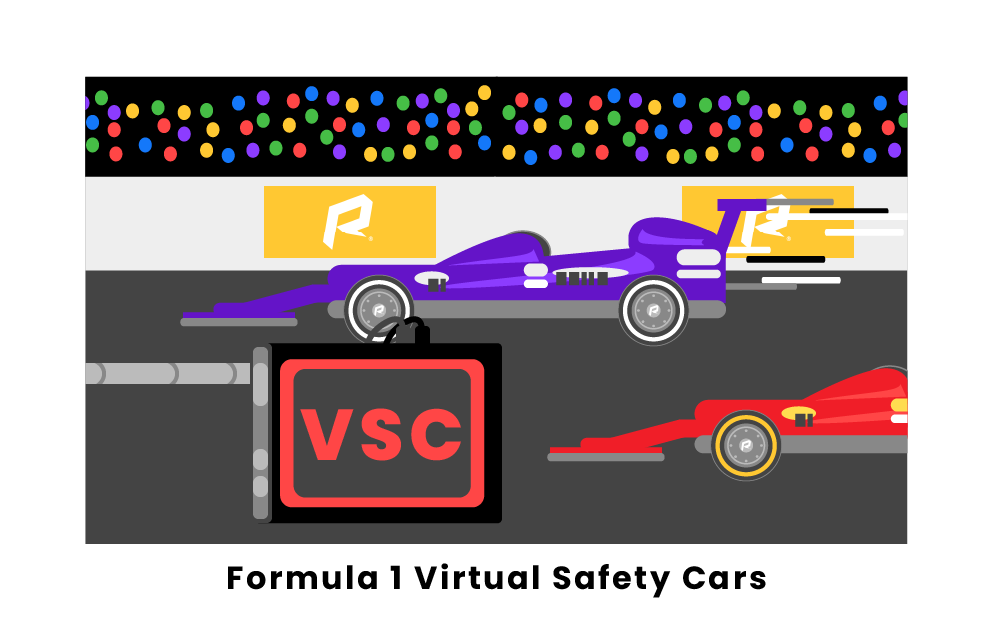 Much like the physical safety car, the virtual safety car is utilized when there are dangers on track. However, these dangers are not sufficient enough to significantly slow the pace of the race, so the virtual safety car is used instead. It is deployed when small pieces of debris need to be picked up or if a car simply needs to be pushed off track. The idea of the VSC is still to slow the cars down to a safer speed while the problem on track is solved. It reduces the speed of the grid by 30%, and each car must follow a specific delta time in each sector of the track. By maintaining a certain delta time, each car will stay the exact same distance from the position in front of it and behind it.

When a VSC is deployed, the official messaging system will send the message “VSC DEPLOYED” to drivers and teams, and the lights around the track will display “VSC.” During this time, all drivers must maintain reduced speed, staying within the required delta times. When VSC conditions are lifted, the message “VSC ENDING” is sent, then the track lights display green and racing resumes.

What happens during a safety car in F1?

During a safety car in F1, all competitors must reduce speed and line up in position behind the safety car, no more than ten car lengths apart. Flashing yellow lights are displayed, the stewards wave yellow flags, and the message, “safety car deployed,” is sent over the official messaging system, all to alert drivers to the presence of a safety car. Cars must stay in line behind the safety car until the track is clear. At this time, the safety car leaves the track, and the cars make a rolling restart.

What model of safety car is used in F1?

There are two models of safety car used in F1: the Mercedes-AMG GT Black Series and the Aston Martin Vantage. Both models receive upgrades over their road-going counterparts, including suspension, steering, dampening, and stiffening improvements. The same manufacturers provide medical cars for F1. The models used for medical cars are the Mercedes Mercedes GT 63 S 4MATIC+ and the Aston Martin DBX.

Has an F1 car ever hit the safety car?

No Formula 1 car has ever hit the safety car. The use of safety cars in F1 Grands Prix was mandated in 1993. They had been used on occasion in the series prior to that, as well. Throughout the history of the safety car’s use in F1, there has never been a crash involving the safety car. Contributing to this record of safety is the fact that all safety car drivers are retired racing drivers with FIA Super Licenses.