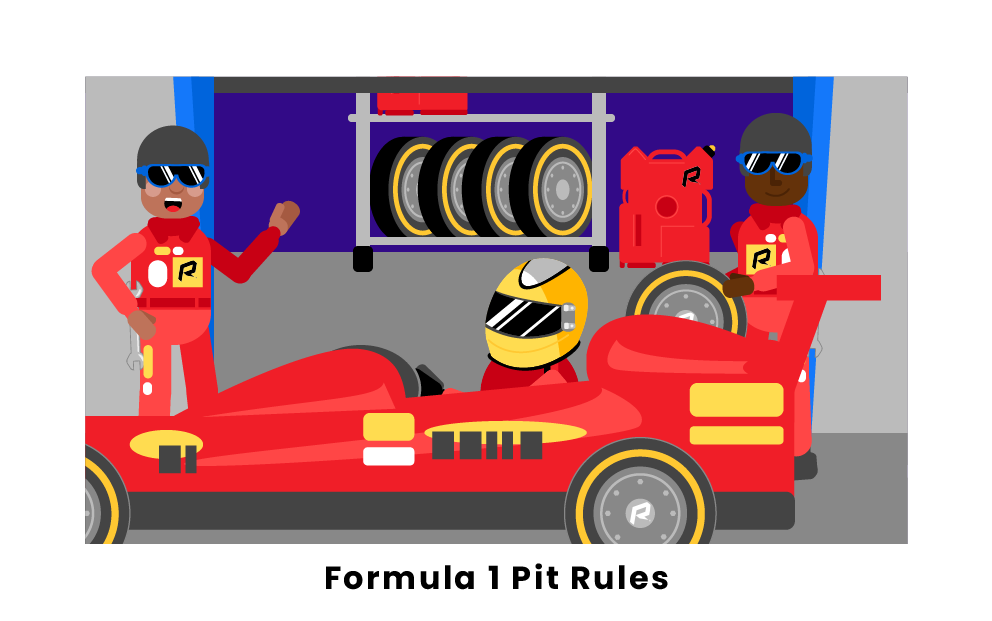 Every aspect and detail is crucial to success in Formula 1, one of which has to be a perfect pit stop. A pit stop occurs within the pit lane when a lone competitor now finds their car surrounded by their hustling team. While the pit stops themselves might take an average of 2.5 seconds, it is an extremely complex and difficult environment to work in, demanding years of experience from each team member. Not only do the teams have to make calls on the fly to get their car in top shape, but they also have to pay attention to the FIA rules and regulations while in the pit lane.

If any of these rules are violated, it will result in a penalty for the car. They only have seconds to get it right, or they’ll end up at the back of the pack. Read on to learn more about rules and regulations in the pit lane. 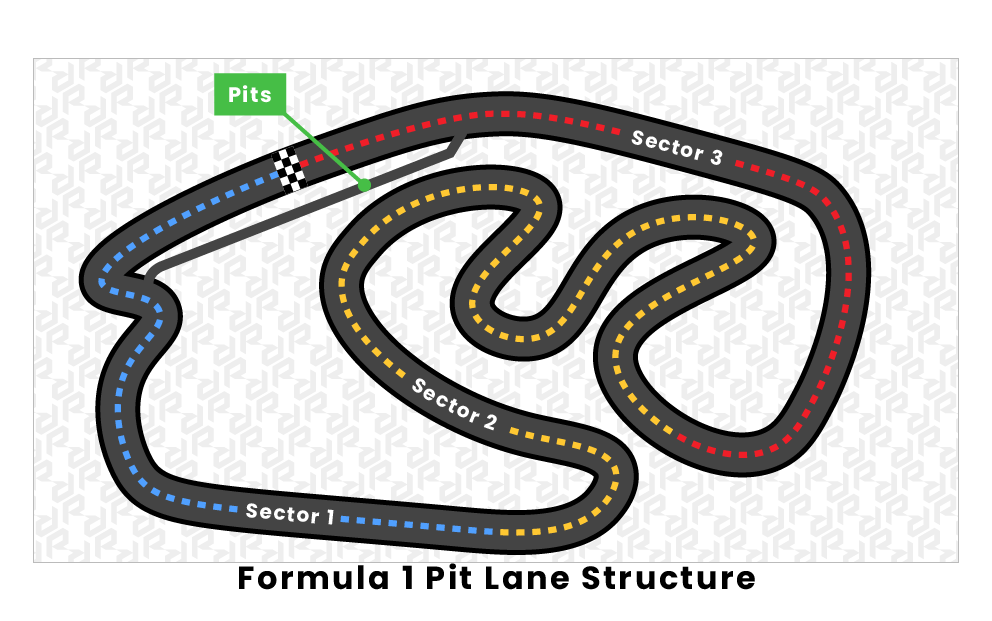 The pit lane runs parallel to the start/finish straight at every race. The front of the pit lane is known as the pit entry; it is designated from the first safety car line to the beginning of the pit lane. The pit exit is designated from the end of the pit lane to the second safety car line. There are two different lanes within the pit lane, the fast lane and the inner lane. The fast lane is closest to the pit wall and is used for the cars to drive through the entire pit area. The inner lane is closest to the team garage; this is where the cars stop to have work done. At each race, the FIA allocates one garage for each team. 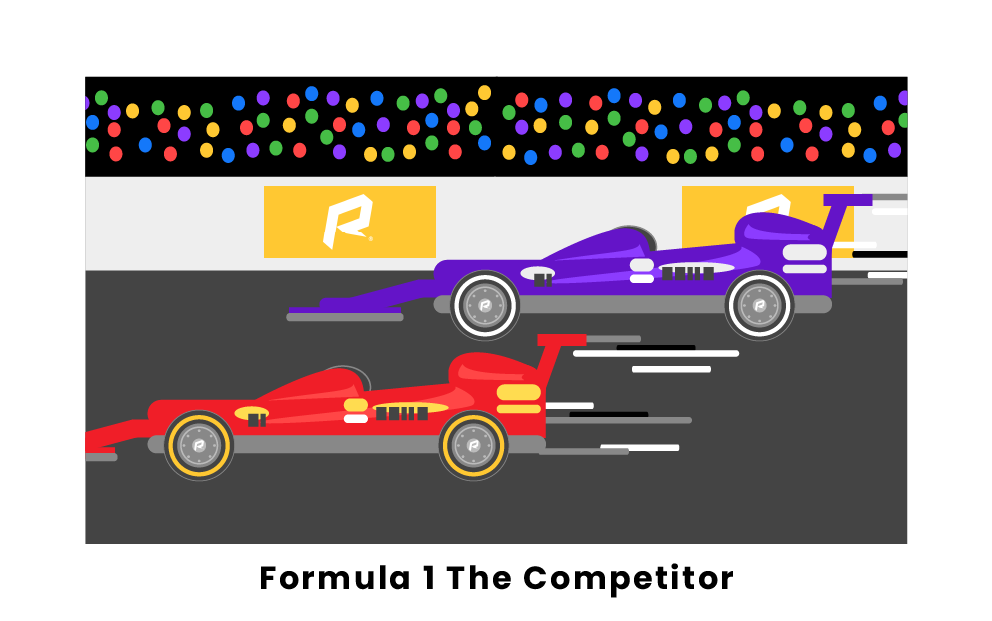 When entering the pit lane, each competitor cannot go above 80 km/hr, or else it will result in a penalty. The penalty can vary depending on the severity of the competitor’s speed. This can range from a “drive through” where the competitor is not allowed to stop and must drive all the way through the pit lane, or they can be given a time penalty of up to 10 seconds. The speed a driver maintains through the pit lane can be crucial to their success in the race. While they do not want to exceed 80 km/hr, they also want to go no less than 80 km/hr because they will be slower than their competitors. Each car has a button on the steering wheel that limits its speed in the pit lane. The last rule each driver must pay attention to is not reversing in the pit lane. No car can be reversed using its own power in the pit lane. However, the team is allowed to push it backwards physically.

When exiting their pit box, drivers must pull away in a safe manner that does not endanger team personnel or other drivers. Teams must signal that their driver is leaving the pit box. If a driver is found to have left their pit box in an unsafe manner, they will be assessed an unsafe release penalty and punished with a ten-second stop-and-go penalty. When exiting the pit lane, drivers must observe the same 80 km/h speed limit. 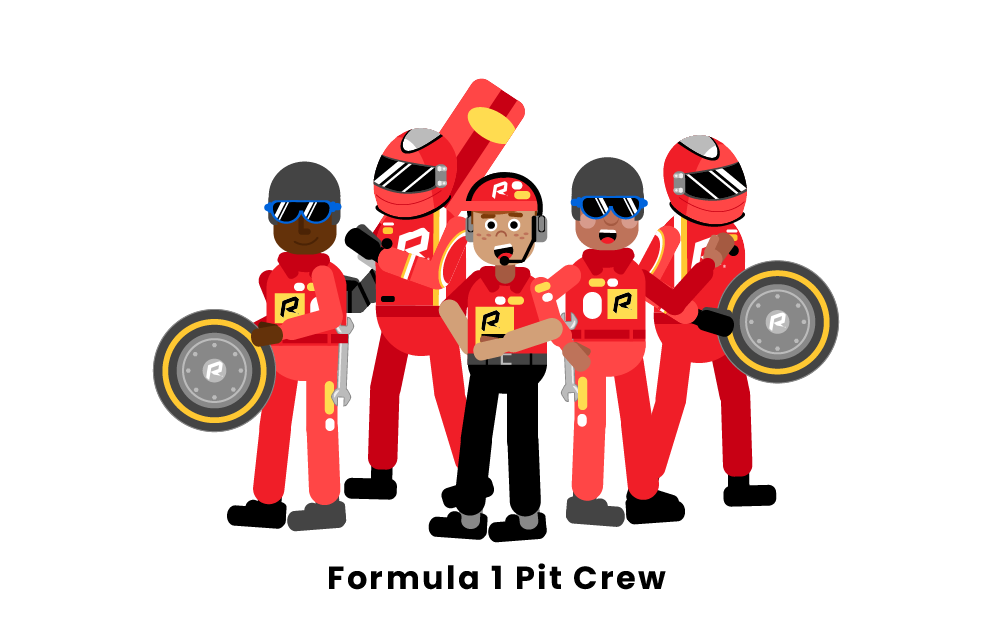 The pit crew is only allowed to come out onto the inner pit lane immediately before their driver arrives. Once they have finished their work, they must quickly leave the inner lane and go back into their garage. Each crew member must also be wearing a safety helmet that meets the regulations put forth by FIA. The pit crew is not allowed to use any powered device to lift the car, and they are not allowed to do any work on the car in the fast lane unless it is thirty minutes before the start of the formation lap.

During this time, each car is lined up in the fast lane awaiting the start of the race. Under these circumstances, the crew is allowed to perform work on the car in the fast lane, such as changing tires, changing the cockpit for the driver's comfort, fitting or removing cooling and heating devices, and starting or stopping the engine. Lastly, crew members are not allowed to paint any lines within the pit lane, and they are only allowed to enhance the grip of the pit lane by drying, sweeping, or laying tire rubber down.

Pit crews change tires, make aerodynamic adjustments, and make minor repairs during pit stops. Historically, fuel was added during pit stops, but this was outlawed out of concern for driver and pit crew safety. Today each car carries enough fuel to get through an entire race, and refueling is not necessary during pit stops.

What are the most important F1 pit stop rules?

The most important pit stop rules in Formula 1 are entry speed, exit procedure, and following pit stop procedure. F1 cars are not allowed to enter the pit lane at speeds above 80 km/hr, or else they will receive a time penalty. When exiting the pit lane after a stop, drivers must do so safely in a way that does not obstruct other drivers, or they will also receive a penalty. Finally, in the pit stop itself, the pit crew must be wearing proper gear, not use any powered devices to lift the car, and not remain in the pit lane after their driver departs, among other restrictions.

What happens if you don’t pit in F1?

You will be disqualified from the race if you don’t pit in F1. A rule was added in 2011 that required teams to change tire compounds during a race, coinciding with Pirelli’s introduction as the official tire sponsor. The exception to the rule is races that start under wet conditions; in those cases, a pit stop is not mandatory. This rule was added to make strategy more interesting and competitive in F1, as now teams must plan for multiple compounds at a single track.

How do pit stops work in F1?

In Formula 1, a pit stop follows very fast and meticulous procedures. First, the driver enters the pit lane at speeds under 80 km/hr and slows down to a stop in their designated pit area. Once in the pit box, the car is lifted up on its jacks and the crew comes in to alter it. The crew may change out the car’s tires, wings, or other parts of the car, and make adjustments to the cockpit, with each part having a group of workers fixing it simultaneously. The process is streamlined and fast, often lasting only seconds, and when the required work is done, the car is lowered, the crew backs off, and the car returns to the race.