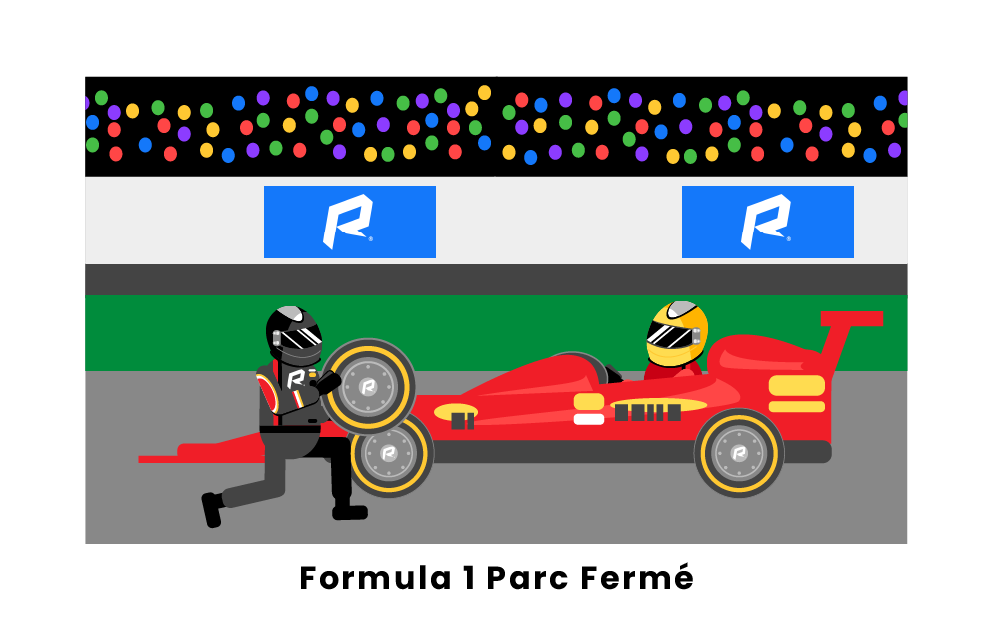 Parc fermé is an important rule in Formula 1 racing that helps officials limit and supervise changes and repairs made to a car at any time between its pre-race and post-race technical inspections. Find everything you need to know about Formula 1’s parc fermé rules below, including when and where cars are considered to be in parc fermé and what types of changes teams are allowed to make under parc fermé conditions.

Parc fermé is a French phrase that means “closed park.” The most important thing to understand when learning about parc fermé rules is that Formula 1 uses the term “parc fermé” to refer to both an idea and a place. When cars and teams are in the situation of being subjected to parc fermé rules, they are referred to as “in parc fermé.” By contrast, the physical area where cars are kept while under parc fermé restrictions is known as “the parc fermé.”

Keep in mind that cars and teams can be in parc fermé even when they are not within the physical confines of the parc fermé area. Such instances include when a car is on track during qualifying or in an FIA garage bay for a scrutineering weighing session.

While cars are under parc fermé conditions, one scrutineer race marshal is assigned to supervise each car to ensure that no unauthorized work is being performed. This means that a team of at least 20 scrutineers is required to monitor the field during parc fermé.

The pre-race parc fermé begins the moment a competitor exits the pit lane to begin their qualifying session and lasts until the start of the race itself. Before the beginning of the pre-race parc fermé, each team is required to submit a suspension setup sheet for both of their cars to the technical delegate.

During the pre-race parc fermé, all of the cars are kept in the parc fermé area at all times when they are not on the track for qualifying or being inspected and weighed by the scrutineers. Teams and competitors are only allowed to perform minor, pre-approved service to their cars. They must complete any service or repairs within the parc fermé area and under the direct supervision of race officials in charge of monitoring the parc fermé.

Even though the top-three finishers proceed to the podium after the race and do not enter the parc fermé area, they are nonetheless in parc fermé at this time. Race officials will secure the area around their cars and supervise the drivers, subjecting them to the same scrutiny as all of the other drivers in post-race parc fermé.

During the pre-race parc fermé, no major components such as the engine or gearbox are allowed to be modified or changed. However, minor services may be performed, and smaller parts may be changed, provided it is done under official supervision.

Any damage that the car has sustained as a result of an accident during qualifying is also allowed to be repaired. If parts are removed to repair damage or for any other reason, they must be kept nearby so that scrutineers can examine them.