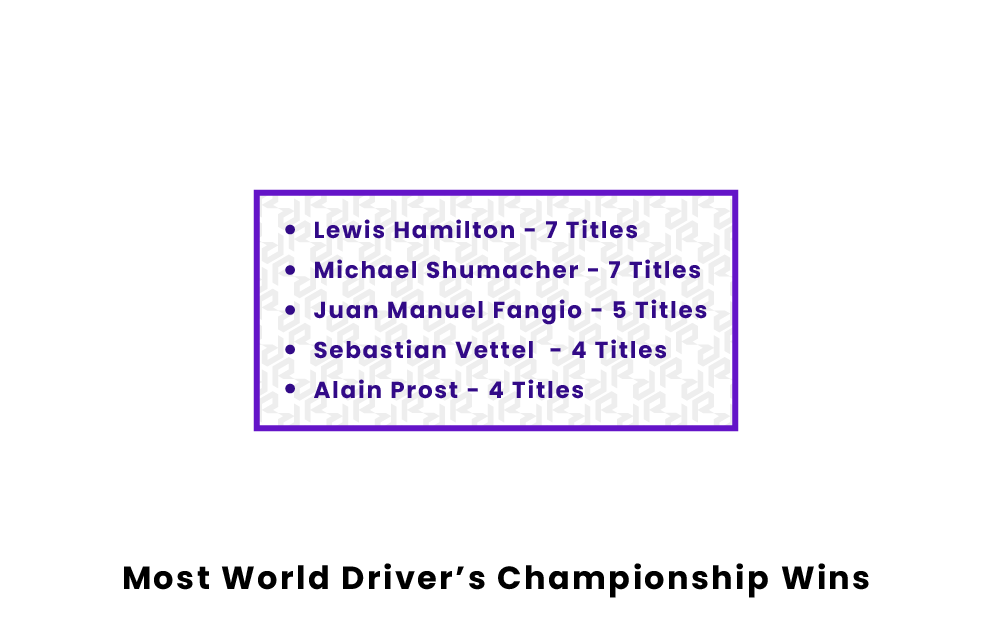 With its inaugural season in 1950, Formula 1 racing became one of the most exciting, fast-paced sports on the planet. Drivers zoom around the track at breakneck speeds, tackling turns and other opponents with masterful levels of skill. There have been 34 different champions in the history of Formula 1, and nearly half of those champions won multiple titles. Keep reading below to learn more about the Formula 1 drivers with the most championships.

What Formula One Drivers Have The Most Champion Wins?

Lewis Hamilton has seven titles to his name, tied for the most in the history of the sport, but his career is much more impressive the closer you look. Hamilton, who is still actively driving, has also accumulated over 100 wins in his career, the most ever in Formula 1’s 72-year history. He won his first title in 2008, but it took him a while to reclaim championship status. When he did, however, Hamilton became the dominant force in racing for the next decade. He won six titles from 2014-2020 and, in 2021, came within a lap of winning a record-breaking eighth championship.

The only other man to ever win seven titles in Formula 1, Michael Schumacher, was equally as dominant, if not more, than Hamilton during his prime. He won his first two titles back-to-back in 1994 and 1995, but five years later, he began the best stretch of driving the sport has ever seen. Schumacher won five straight Formula 1 titles from 2000-2004, a record that still stands as the most consecutive championships ever in the sport’s history. He also racked up 91 wins during his career, the second-most all-time.

Though Hamilton and Schumacher have ruled the sport more recently, Juan Manuel Fangio was Formula 1’s first true star, and won a total of five championships. He won the second-ever F1 title in 1951, but he wasn’t done there. Fangio came back to win his second title in 1954, the first of four-straight wins for the Argentinian driver. That was a record until Schumacher came along and bested it, but Fangio’s talent was undeniably amongst the greatest of all time. Perhaps most impressive was the fact that he won his five titles with four different car manufacturers, winning once with Alfa Romeo, once with Maserati, once with Ferrari, and twice with Mercedes.

One of two men ever to win exactly four Formula 1 titles, Sebastian Vettel is also one of two members of this list who is still actively competing in F1. Vettel was the face of Formula 1 racing in the early 2010s, matching Fangio by winning four-straight titles from 2010-2013. Vettel raced for Red Bull, and his titles were the first-ever for the team, which has since won another championship in 2021 with Max Verstappen. Vettel has continued to be successful in races around the world, as his 53 wins are the third-most in the history of the sport.

Alain Prost, the only other man to win four titles, spread his championship wins much further than Vettel. He did win his first two titles back-to-back in 1985 and 1986, but he would not win his third until 1989. In 1993, Prost captured his fourth and final championship, putting him in second place all time at that point. Though a few other drivers have since passed him, Prost’s legacy remains as one of racing’s greats, and his 51 career wins are good for fourth all-time in F1 history.

Which Formula 1 constructor has won the most titles?

The Formula 1 constructor with the most titles in the history of the sport is Ferrari, with 16. The constructor plays a crucial role in F1, as they are responsible for building and providing the car to the driver. Ferrari was dominant from the early days of the sport, picking up titles in the sixties, seventies, and eighties, as well as seven titles since the turn of the century. However, they have not won a championship as a constructor since 2008 with Lewis Hamilton.

Which Formula 1 driver has won the most titles?

There are two drivers each tied with seven Formula 1 championship titles. Lewis Hamilton and Michael Schumacher both won seven times during their careers, and both were unquestionably the top racers of their time. Schumacher went on an absolute tear in the late nineties and early 2000s, and Hamilton has been the sport’s best racer over the past decade.