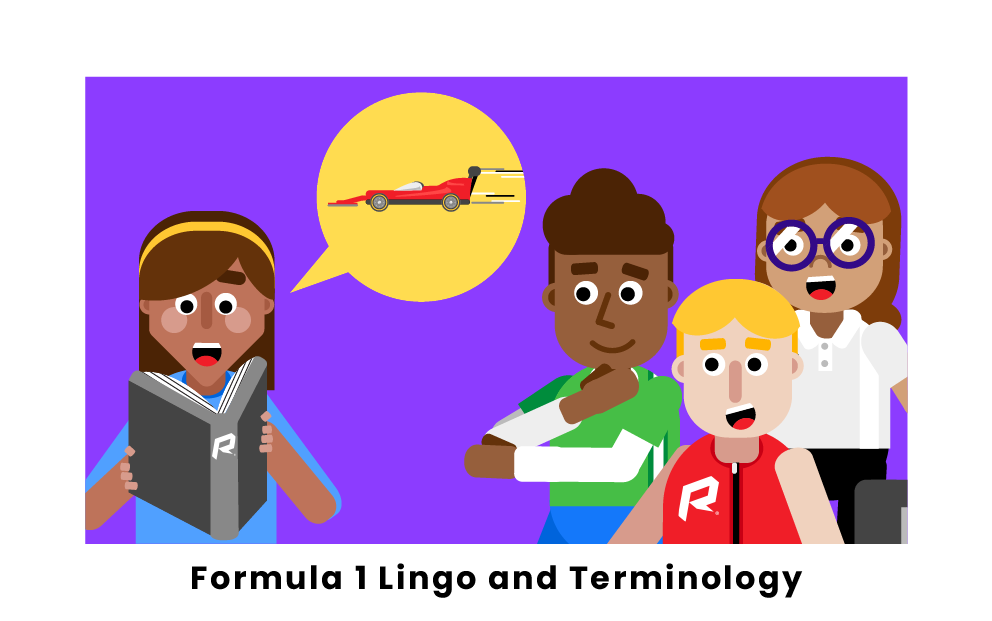 107% Rule: Used to determine if a racer can drive in the official race. Every driver must set a lap within the first 107% of the fastest time during the qualifying phase, otherwise, they cannot race. Some exceptions are made if a driver sets a good time during practice.

Backmarker: Drivers who stay behind in the back of the F1 field, often lapped by leading cars.

Bottoming: When the underside of the car bumps the track.

Box: Usually used as a command by pit crew members to tell the driver to go into the pit to have the car serviced.

Drive-Through Penalty: This is a penalty handed out during the race. Drivers have to enter the pit lane, comply with the speed limit, and should not stop. If this is not followed, this penalty is given.

Falling off the Cliff: The moment when tire performance specifically dropped, rendering them uncompetitive or unusable.

Flatspot: When a driver locks the brakes, causing the tires to stop rotating immediately. Could lead to problems with the tires.

Formation Lap or Warm-up Lap: The lap given to racers that are driven round from the grid before starting the first official lap.

Green track: Refers to a circuit that racers practice on before the official race.

Jumpstart: When a driver starts the car before the red light that signals the race. The driver is given a penalty as this is an unfair advantage.

Lift and Coast: In cases where too much fuel is being used, the driver must lift off the throttle and go into a braking zone. This slows down the car but uses less fuel.

Outperforming a Car: When a driver is so talented that they essentially outperform the car they are driving.

Polesitter: A driver that will claim pole position during the qualifying portion of the race.

Tankslapper: The moment when the backside of a car steps out, leading the car to drive slightly sideways.

Undercut: When a driver heads to their pit early in the race, as the driver thinks that fresh tires might put them ahead of other competitors.

Blistering/Graining: Blistering is when temperature imbalance (meaning the tire’s inner carcass is hot and the outer part is cold) causes pieces of rubber to explore in a tire, thus creating a hole. Graining is when the tire’s inner carcass is cold and the outer part is hot, causing the rubber to stick to the tire surface. This decreases performance.

Brake Bias: When a driver shifts how effective the front or rear brakes are based on the brake bias. Drivers will change the brake bias depending on factors like fuel or tire performance.

Circuit: Circuits are built for conducting races. There are two types: Street Circuit and Road Circuit.

Cockpit: Section of the Formula 1 car in which a driver sits.

Constructor: The FIA ruled in 1981 that all F1 teams must build certain parts of the car. The person who engineers these pieces (the chassis and engine) is called the constructor.

DRS: This is known as a drag reduction system. A DRS is a flap, and when lifted, can allow it to travel faster and aid overtaking through reducing drag acting.

Flat spot: Given to an area or spot in a tire that is worn out, which can ruin the tire and may require a new set of replacement tires.

Lollipop: The signboard at the pit stop. This signals to drivers to apply brakes and apply first gear before the car is lowered into the jacks.

Marbles: Small pieces of rubber that fall out of the tires due to shredding. These often cause problems for drivers, as bumping into them mid-race can prevent the tire from making proper contact with the road.

Parc Ferme: A restricted area, where no members are allowed. All race cars are driven here following a race. This area only allows race stewards.

Pits: This is the area of the track separated by a wall. Cars will enter this garage to get tires changed, refuel the car, and other necessary changes.

Pit board: This is a board held on the pit wall to inform the driver about three pieces of information: Delta time, the remaining number of laps, and current position.

Pit wall: This is the area where support staff, managers, and engineers watch their cars using small screens.

Pole Position: The driver recorded with the fastest time during the qualifying session is given the first grid position in the race. The driver sitting in this position is called a polesitter.

Steward: An official appointed by and for Formula 1 to make decisions about the races.

Tire Warmer: This refers to an electric blanket wrapped around the tires to keep them at optimal temperatures before the race.

Visor strip: A visor strip made of Zylon adds extra protection to the top edge of a helmet. Zylon is made of a high-resistant carbon fiber material.