How Long Is A Formula 1 Race? 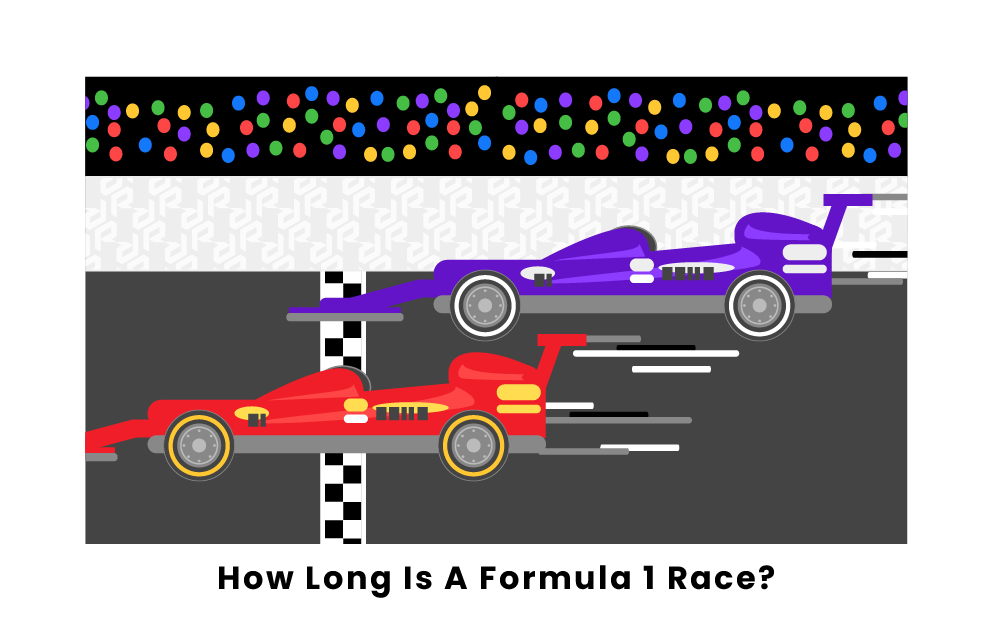 A Formula 1 race must last no more than two hours. However, if the race is suspended for a crash or inclement weather, the race can last a maximum of three hours. Formula 1 cars do not get filled up with gas during the race but instead are given enough gas to last around two hours. Once the race reaches the two-hour mark, the racers are given the “end of race signal” even if the number of required laps has not been completed. Since they only have a limited amount of gas, the race must end around the two-hour mark, or they will run out of gas. A pit stop in Formula 1 is for tires and parts, not for gas.

The distance of a Formula 1 race varies from circuit to circuit, but all circuits follow one specific rule. A race must last a minimum of 305 km or 190 miles. The approximate race distance is determined by the least number of laps required to exceed 305km. This means racers will reach the 305km mark on their last lap, but there can still be a short distance to travel to the finish. This results in every track having slightly different distances. An exception to this rule is the Circuit de Monaco, the track with the shortest race distance, at 260.286km long. The track with the longest race distance is the Sochi Autodrom in Japan which is 309.690km.

A Formula 1 race does not have a required number of laps because each track is constructed differently. Therefore, each track will have a different number of laps. The only requirements that must be met are that the race lasts less than two hours and covers a distance of at least 305km. A larger track will require fewer laps to reach 305km, while a shorter track will require more laps to reach 305km. The track that requires the least amount of laps is Circuit de Spa-Francorchamps in Belgium, with only 44 laps to the finish line. The track that requires the most amount of laps is Circuit de Monaco in Italy, with 78 laps to the finish line. All circuits besides Circuit de Monaco will still require drivers to travel 305km, but just in a different number of laps.

There is one Formula 1 track that is exempt from the rules mentioned above, and that is the Circuit de Monaco. This is a unique course that winds through the streets of Monaco, which results in the drivers driving a little slower and each lap taking a little longer. Since it takes longer to complete each lap, drivers only travel 260km or 161 miles. This is much shorter than the 305km requirement for other F1 tracks. The racers will still be driving for two hours, but they cover less distance since it takes a longer time to complete one lap. Although they cover less distance, they still complete 78 laps on this circuit.

How many laps is an F1 race?

A Formula 1 race does not have a specific number of laps required for every track. Each course has a different composition and will take a different number of laps to complete. Race distances are measured in kilometers and not laps. Most Formula 1 races take between 50-70 laps to complete the required 305km. Circuits that are longer will require fewer laps to reach the required distance of 305km, and shorter circuits will take more laps to reach the requirement.

How long can an F1 race last?

Most F1 races last two hours, but some can last up to three hours. Races will only last three hours if there is a stop in action due to a crash, weather, or other circuit disturbances. A typical race without any stops must finish within a two-hour time period. If a race reaches the two-hour mark before they have completed the proper number of laps, the racers will complete one final lap, and the race will end. They are only given enough gas to last around two hours, so when the time is up, the race needs to come to an end.

How long do red flags last in F1 races?

A red flag in an F1 race lasts no longer than one hour because two hours of racing must be completed within a three-hour time period. Red flags are shown to stop races for inclement weather, crashes, or other potential hazards. Depending on the severity of the situation, it can vary how long it takes for the weather to clear up or for the marshals to clear the track. If a race exceeds the three hours window and the red flag is still raised, the race will be suspended. Depending on how much of the race was completed, different rules determine how points are distributed to the drivers.

Pages Related to How Long Is A Formula 1 Race?