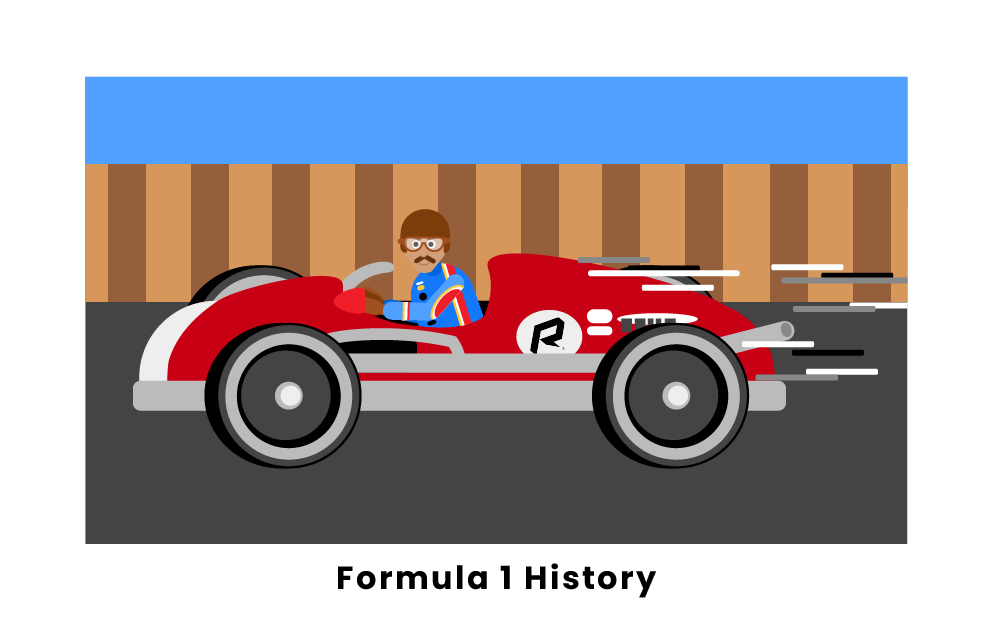 The roots of the category go far back, as people had been racing cars competitively in Europe since the early 1900's. Between the 1930's and 1940's, there were several meetings aiming to organize races into a single united championship, but the start of World War II ended up putting those plans on hold. In 1946, after the War ended, the FIA (Federation Internationale de l'Automobile) standardized a set of rules and started a championship of drivers. The first Formula 1 race took place in Silverstone, England, in 1950.

Although its first race was disputed in England, the start of Formula 1 can't really be traced to a single country, as drivers from many parts of the world would join in races in different parts of the continent, such as France, England, and Spain. In addition to that, in its first seasons, the Indianapolis 500 Grand Prix was also part of the circuit, and later on, other grand Prix outside of Europe were also added.

There is no single individual who invented Formula 1. People have been racing ever since the gasoline-fueled internal combustion engine was popularized. However, Formula 1 is considered to have started after FIA standardized the rules and organized a drivers championship, and it can be said that FIA was the inventor of Formula 1. To this day, the FIA is the worldwide regulating body of Formula 1, among other racing sports. FIA is the one responsible for determining Formula 1's rules, interpret them, apply sanctions and resolve disputes; as well as issuing the super licenses needed by drivers to take part in races. It can be said that FIA also reinvents Formula 1, as changes in the design of the cars and their engines are common, as well as changes in the point system, circuits included in a season, and safety measures.

Formula 1 was officially established on May 13, 1950, when the first official race was held in Silverstone, and the first official drivers' championship began, organized by the FIA. Although there were many Formula 1 races throughout Europe (races with Formula 1 cars and Formula 1 rules), the FIA determined that only seven of those races would have points counted towards that year's drivers championship. From 1950 on, the competition only grew, adding more races per season and expanding to new countries.

Many today may watch any auto racing and believe it to be a dangerous sport. Although sometimes there are shocking crashes, auto racing, specifically Formula 1, is not as dangerous as it once was. Formula 1 has quite an unfortunate history of deaths and injuries. In its first decade of existence, 15 drivers lost their lives in Formula 1 events, and through the next years, those numbers were still scarily high. Nonetheless, there would be no space for Formula 1 in the modern world if it was not safe. The FIA makes its drivers' safety their priority, and every year there is an improvement in safety in Formula 1, and since 1980 the number of drivers that lost their lives is smaller than those of the 1950's alone. Thankfully, fatalities and violent accidents each less and less common. Also, cars are designed in a way that if a crash happens, the driver can escape with minimal injury, and recently many drivers have gotten out of seemingly ugly accidents without a single scratch. Unquestionably, safety is Formula 1's biggest evolution since its creation in 1950. The great drivers who lost their lives doing the sport they loved must not be forgotten, as they are a reminder of the love for the sport and that pilots' lives must be put first.

Auto racing was already popular in Europe way before Formula 1 officially started, people would race all through Europe as early as the late 1890's. That way, it is no surprise that Formula 1 was already born popular in Europe, as it represented and organized way to do what Europeans had already been doing and loved to do. The first-ever Formula 1 race ever, in Silverstone, was attended by King George VI and other members of the English Royal Family. It is also estimated that around 100.000 people made to trip to Silverstone to watch the race. In addition to that, there was a certain nationalism between fans and teams, that prevails to this day. Italians are very passionate about the main Italians team, Ferrari, and the English about England's most successful team McLaren Racing. Although Europe is still its main market, Formula 1 is also very popular in other continents. Countries like Argentina, Brazil, and Australia have had legendary drivers finding success in Formula 1, and so the sport is very popular in those countries too.

Despite having European origins, Formula 1 is popular in the entire globe. In a Formula 1 season, races take place in the Americas, Africa, Asia, Australia, and Europe. In addition to that, drivers come from many different countries. In the 2019 season, 11 of the 21 races were held outside Europe. Since its creation, there have been Formula 1 drivers from 41 different nations, and world champions from 14 different countries. Being a very global sport, Formula 1 has large fan bases in countries such as:

The first official Formula 1 Grand Prix is held in Silverstone, England. The race was won by Nino Farina

The first Grand Prix in South America was added to the Formula 1 circuit. The race was held in Argentina, the home of one of Formula 1's best drivers at the time, Juan Manuel Fangio. Fangio did not finish the race in his home country due to car problems.

The first Grand Prix in Africa was held in Morocco.

Sponsorships, something very common in Formula 1 today, appeared for the first time in a race in Team Lotus' cars.

Jochen Rindt passes away after a crash during the qualifying round of the Italian Grand Prix. Rindt would go on to win that year's championship after his death and is the only racer to be crowned Formula 1 World Champion.

Nikki Lauda, one of the most brilliant minds Formula 1 has ever seen wins his first of three World championships. Lauda had a rivalry with Britain's James Hunt.

Nikki Lauda gets involved in a nearly fatal crash. Lauda came back in a shockingly short time, to keep his title hopes alive. It all came down to the Japanese Grand Prix, where James Hunt went on to beat Lauda for the World Championship In which is one of Formula 1's most exciting stories.

Future Formula 1 legend Michael Schumacher starts in his first Formula 1 race for team Jordan, substituting one of the team's main driver who was unable to take part in the race. Schumacher would win 7 world championships and is considered by many to be the greatest driver of all time.

The weekend of May 1, 1994, was one of the darkest in Formula 1 history. On April 29, during Friday practice, Brazillian driver Rubens Barrichello got involved in a scary crash that left the Formula 1 world shook. Fortunately, Barrichello got out of it with only a broken nose and would go on to drive many more years in Formula 1. The next day, April 30, during the qualifying session, Austrian rookie driver Roland Ratzenberger lost his life while driving. After his death, many drivers wanted the race to be canceled, or planned not to race on Sunday, including three-time world champion Ayrton Senna. Senna, who was a legend of the sport and a hero in his home country of Brazil, ended up starting the race, during which he violently crashed against the wall. Senna died in the nearest hospital hours later. Ratzenberger and Senna's deaths were the first in Formula 1 in 12 years, and that weekend is not always remembered with sorrow by formula one fans.

After seven world titles and a period of complete dominance with Scuderia Ferrari, Michael Schumacher chooses to retire from Formula 1 as the most successful athlete ever to drive in Formula 1. Schumacher would return in 2010 and race for three more years for team Mercedes, but would not achieve the same success as before.

Between the domination of Ferrari and Schumacher, and later on Sebastian Vettel and Lewis Hamilton, a one-season wonder shook Formula 1 fans. Brawn GP, a new team, created in 2009, went on to dominate the 2009 season, winning the constructor's championship with Jenson Button and Rubens Barrichello as its drivers. Button would also be that year's world champion. After its one season, Brawn GP was sold and rebranded as Mercedes GP.

Sebastian Vettel would go on to win four championships in a row with a rather small team, Red Bull Racing. Vettel was called by many the next Schumacher, as they were both German and very successful in Formula 1.

After being the youngest driver ever to win the world championship in 2008 at the age of 23, Lewis Hamilton would keep on writing his name in Formula 1 history, winning five other titles in six years between 2014 and 2019. Hamilton has real chances to pass Michael Schumacher and be the driver with the most world championships in Formula 1 history.