Why Do Ivy League Schools Not Have Good Football Teams? 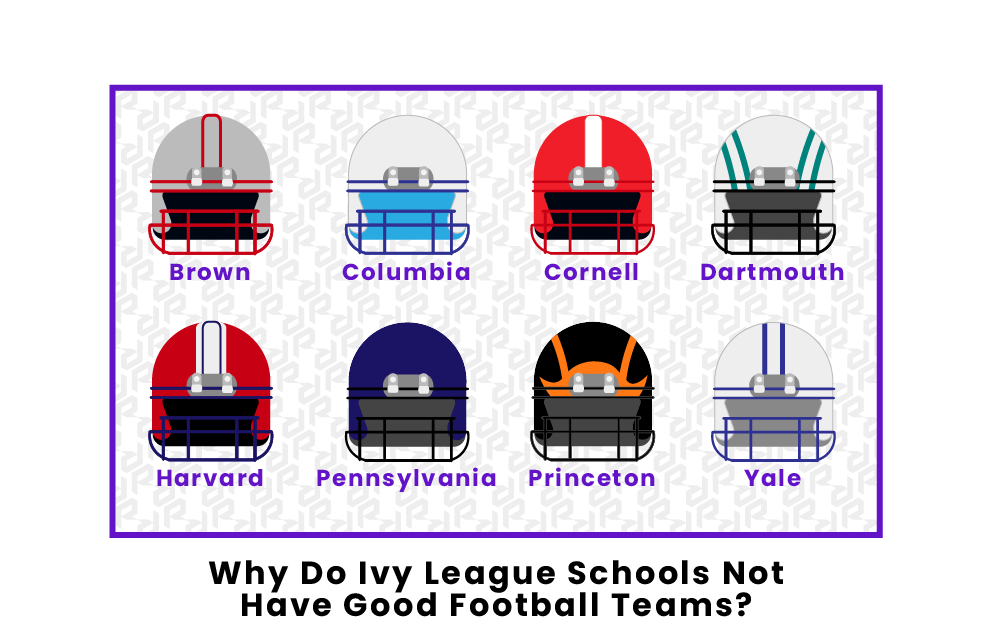 The Ivy League school system, which consists of Harvard University, University of Pennsylvania, Brown University, Princeton University, Columbia University, Cornell University, Dartmouth College, and Yale University, is renowned for its academic excellence. However, none of those schools are known for having great football teams.

The main reason that Ivy League schools do not have good football teams is the requirement of high academic standards. When recruiting football players, Ivy League coaches and staff must adhere to the Academic Index, which is a combination of scores from the SAT I, SAT II, and GPA.

Most often, the admissions offices at Ivy League schools dictate which athletes will be admitted to the school or not. In other words, student-athletes must apply to the Ivy League college and be accepted before they can even consider joining the football team. Meanwhile, universities in other conferences, like the Big 12 or the Pac-12, may recruit players based solely on athletic ability. Ivy League schools require players to meet such high non-athletic criteria that it makes sense that their applicant pool is smaller and less competitive than other conferences.

During the 1950s, Ivy League universities and colleges (especially Cornell and Brown) de-emphasized their focus on athletics and instead concentrated on building outstanding academic programs. This, of course, has impacted every Ivy League football program all the way from recruiting to playing in championship games. Most talented football players are sought out and recruited by universities and colleges in conferences like the SEC and Pac-12, which offer many scholarships for athletes and have massively built up their athletic programs.

Another big factor that impacts recruiting top football players to join and play for Ivy League teams is the lack of athletic scholarships. Since their inception, Ivy League universities and colleges have not offered many scholarships, especially athletic scholarships, so attending an expensive program has hindered players from joining these football teams. Recently, Ivy League schools have begun to offer more financial aid packages, which help some players be able to afford attending the university and playing for their football team.

The Future of Ivy League Football

So, what does the future of Ivy League football look like? All eight Ivy League schools are now offering larger and more frequent endowments for all students, including athletes, so this might help attract and recruit talented football players. Football programs such as Dartmouth are also incorporating better technology and ways to improve performance on the football field, which may attract more athletes to play for their teams. The recent NCAA NIL (Name, Image, and Likeness) policy will also allow players to profit from the use of their resemblance in advertising, which would help offset the cost of attending an expensive Ivy League school.

Pages Related to Why Do Ivy League Schools Not Have Good Football Teams?