Who Are The Dallas Cowboys' Biggest Rivals? 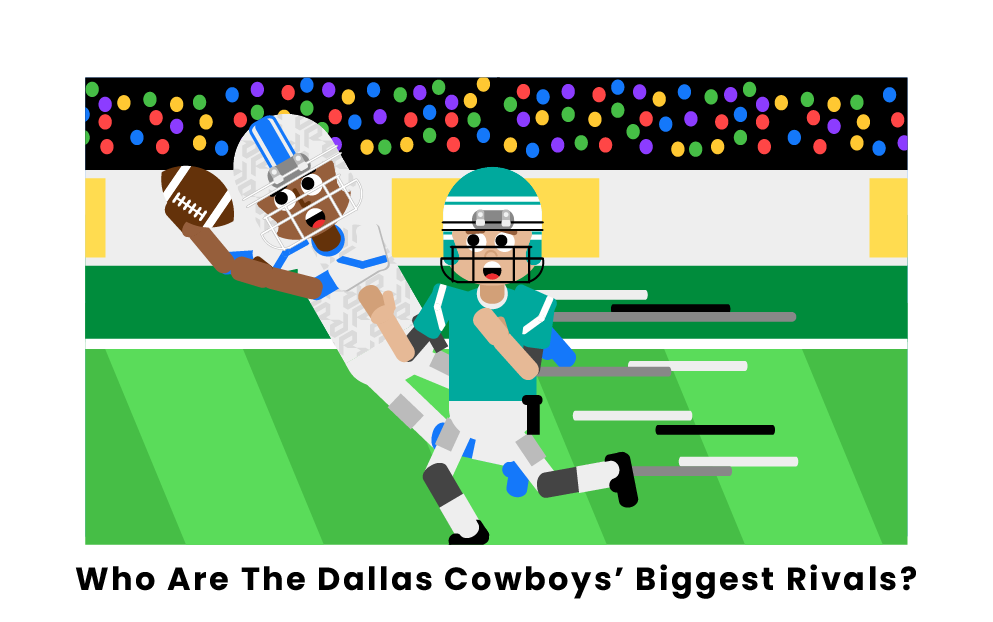 The Dallas Cowboys’ biggest rivals are the Green Bay Packers, Philadelphia Eagles, and Washington Football Team. As a team with one of the most Superbowl wins in the NFL, the Dallas Cowboys have collected their fair share of rivals over the years. There are many teams who consider the Cowboys to be an enemy of theirs, but some of the most famous rivalries are those with the Washington Football Team, the Green Bay Packers, and the Philadelphia Eagles. Being titled America’s Team sets the stage even brighter, fueling these rivalries for decades.

Both strong teams in the 1960s and 1970s, the Dallas Cowboys and Green Bay Packers were destined to be rivals. On January 1, 1967, the Cowboys and Packers met at the NFC Championship, where the Packers coach Vince Lombardi led them to a 34-27 win and a spot in the first Super Bowl. The Packers went on to win Super Bowl I against the Kansas City Chiefs. In the following season, history repeated itself and the Packers beat the Cowboys in the “Ice Bowl” NFC Championship, one of the coldest NFL games ever to be played. This game led the Packers to play in and win Super Bowl II against the Oakland Raiders. In the 1990s, the Cowboys and Packers played each other in the postseason three consecutive years in a row, and the Cowboys won every game. The Dallas Cowboys and Green Bay Packers have the second-highest number of postseason meetings, further fueling the rivalry.

The rivalry between the Dallas Cowboys and the Philadelphia Eagles is argued by many to be one of the most intense rivalries in the history of the NFL. It all began in 1966 after a great season for the Cowboys and a much worse season for the Eagles. When the two teams met in October, the Cowboys predictably beat the Eagles after three consecutive wins. However, when the teams rematched that November, the Eagles unexpectedly defeated the Cowboys, 23-22. One memorable moment in this rivalry took place on December 10, 1967, when Cowboys linebacker Lee Roy Jordan elbowed Eagles running back Tommy Brown in the face, causing him to lose multiple teeth. Before the game, it had been rumored that the Cowboys were planning on targeting Brown during the game, but over forty years after this game was played, Lee Roy Jordan still stood firm on the fact that there was no foul play involved in the hit. To many, this play is what truly sparked the famous rivalry between the Dallas Cowboys and the Philadelphia Eagles.

The rivalry between the Dallas Cowboys and the Washington Football Team, formerly the Washington Redskins, began before the Dallas Cowboys were even a team in the NFL. The NFL had expressed interest in creating a team in Texas, and the founder of the Redskins, George Preston Marshall, did not want a team to be based in Dallas because he wanted Washington to have the NFL team that was the furthest south. To get Marshall to change his mind, the future Cowboys owners, Clint Murchison Jr. and Bedford Wynne, bought the unpatented Redskins’ song, Hail to the Redskins. They blackmailed Marshall into voting for a team to be created in Dallas. Once the Cowboys were established, the rivalry started to heat up in the 1960s because the Cowboys were a competitive team. In 1972, Washington beat the Cowboys, 26-3, in the NFC Championship after Washington coach George Allen created a team that so passionately hated the Cowboys, and this sparked an even more fierce rivalry between the teams. In 1992 and 1993, the Dallas Cowboys and the Washington Redskins won back-to-back Super Bowls.

Are the Cowboys and the Giants rivals?

The Dallas Cowboys and New York Giants are rivals, even though they are located nowhere near each other. The Cowboys and Giants tied at their first game in 1960, and the Cowboys won most games against the Giants through the late 1960s until the 1980s. The teams have only met in the postseason one time, and the Giants won. Both teams play in the NFC Eastern division, which is a contributing factor to this rivalry. The Dallas Cowboys have won most of the games against the New York Giants, but they are often a competitive matchup.

Who is the Dallas Cowboys’ biggest rival?

Since the Dallas Cowboys have been a strong and competitive team throughout most of their history, they have accumulated a number of rivals. They don’t have one definitive biggest rival, but instead, it is heavily debated who their biggest rival truly is. Many believe the Philadelphia Eagles are the true rival of the Cowboys, as they have faced each other 125 times and are both in the NFC East. Others believe that the greatest enemy Dallas has is the Green Bay Packers, due to the historic matchups between the two.

Are the Cowboys and 49ers rivals?

The Dallas Cowboys and San Francisco 49ers are rivals and have always had natural competition between them. The two teams each have five Super Bowl wins and are tied for the second-highest number of wins behind the Pittsburgh Steelers and New England Patriots. Their rivalry was particularly potent in the 1970s and 1990s when the two teams repeatedly clashed for NFC Championships. Each time Dallas and San Francisco met in the postseason in the 1990s, whichever team won their game proceeded to win that season’s Super Bowl. The NFL’s current scheduling has limited the matchups between these two teams, but their inter-division rivalry remains heated for longtime fans.

Pages Related to Who Are The Dallas Cowboys' Biggest Rivals?