What Teams With Losing Records Have Made The NFL Playoffs? 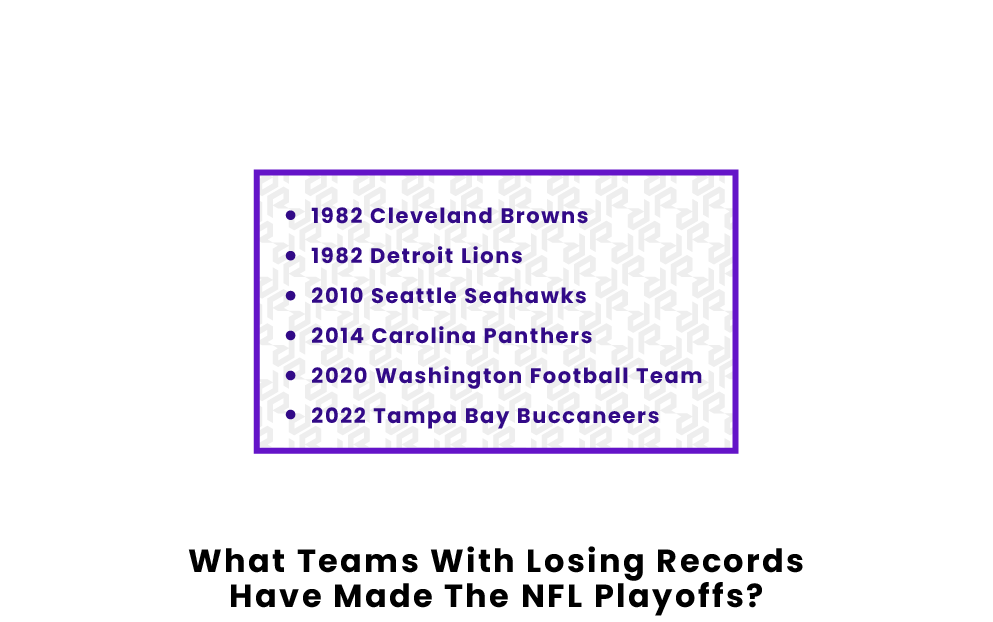 The NFL playoffs are among the most competitive postseasons across US professional leagues, as only seven teams (six until 2020, five until 1990, four until 1978, and two until 1970) from each conference can qualify for the postseason. Nonetheless, the modern structure, where division champions get an automatic bid to the playoff, has allowed teams with a losing record to still qualify. Let’s find out who these teams have been!

Due to a 57-day strike from the NFLPA, the 1982 season was shortened to nine games, and eight teams from each conference were allowed into the playoffs, which ended up letting two teams with a losing record, the Cleveland Browns and the Detroit Lions, qualify for the postseason.

The 1982 Cleveland Browns finished the regular season with a 4-5 record and grabbed the last playoff spot in the AFC. Led by rookie sensation Chip Banks, the Browns won three regular-season games after the lockout before getting eliminated by the first-seed in AFC, the Los Angeles Raiders, in the first round of the playoffs.

Just like the Cleveland Browns, the Detroit Lions were able to qualify for the 1982 NFL postseason despite finishing the season with a 4-5 record. Although they had three Pro Bowlers and one All-Pro player, defensive tackle Doug English, the Lions lost five out of the seven regular-season games before the playoffs after starting the season with a 2-0 record.

The Detroit Lions made the playoffs as the No. 8 seed in the NFC and met the No. 1 seed, the Washington Redskins, in the first round. The Redskins dominated the game and won 31-7 en route to their first Super Bowl title.

The 2010 Seahawks were the first team to make the playoffs with a losing record in a 16-game NFL regular season. The team was able to take advantage of the weak competition in the NFC West, winning the title and advancing to the Wild Card Round despite a 7-9 record.

Despite their losing record, the Seahawks had a great playoff run, beating the fourth-seeded New Orleans Saints in the Wild Card Round thanks to “the Beast Quake,” one of the most dominant plays made by star running back Marshawn Lynch. However, Pete Carroll’s team was eliminated by the Chicago Bears in the second round of the playoffs.

Week 17 of the 2014 NFL regular season was set for a dramatic finish, with the Atlanta Falcons, the Carolina Panthers, and the New Orleans Saints all hoping to clinch a playoff ticket despite a losing record in the regular season. However, the Panthers crushed the Falcons 34-3 and made it to the Wild Card Round despite their 7-8-1 record. There, they would beat the Arizona Cardinals before getting eliminated by the No. 1 seed, the Seattle Seahawks.

The Washington Football Team qualified for the Wild Card of the 2020 NFL Playoffs with a losing record. Due to many quarterback injuries that plagued all four teams in the NFC East, the Cowboys, the Giants, and the Washington Football Team were all in playoff contention in Week 17. The WFT was able to make it to the postseason after amassing a 7-9 record in the regular season, in part thanks to a 20-14 win against the Eagles, before losing the Wild Card round to the Tampa Bay Buccaneers.

The 2022 Tampa Bay Buccaneers are the most recent team to qualify for the NFL Playoffs with a losing record. They finished the season with a 8-9 record to win the NFC South and secure a spot in the playoffs. Thus, all teams in the NFC South division in the 2022 season finished below a .500 win percentage. All three other NFC South teams finished with a 7-10 record.

Pages Related to What Teams With Losing Records Have Made The NFL Playoffs?