What Is The Biggest Comeback In An NFL Football Game? 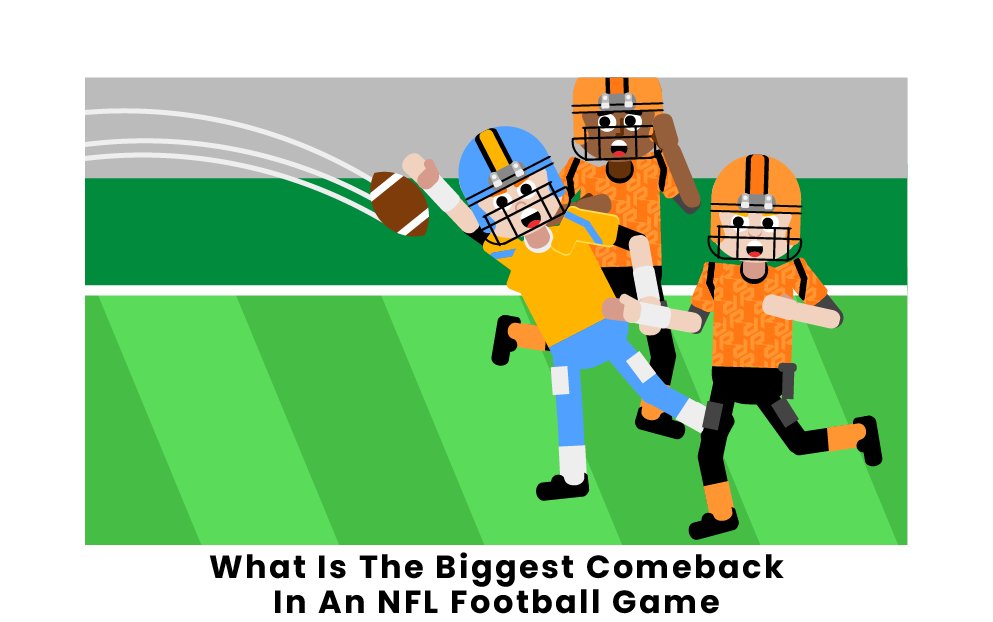 Pulling off a great comeback in football is an extremely difficult task. The losing team has to slow down the opposing offense and cause some turnovers while scoring on almost every offensive drive. This becomes even harder when the winning team can run down the clock as much as possible. However, in over one hundred years of NFL history, a few teams have been able to overcome even 20 or 30-point deficits. Read on to learn about the biggest comebacks in NFL history!

Until Week 15 of the 2022 NFL season, the record for the biggest comeback in the regular season belonged to the 1980 San Francisco 49ers, while the 1992 Buffalo Bills still had the largest comeback in the history of the league (playoffs included). The 2022 Minnesota Vikings beat both records in their legendary overtime win against the Indianapolis Colts on December 17, 2022.

In what was Jeff Saturday’s fifth game as NFL head coach, the Colts visited the Vikings in search of a much-needed win to keep their playoff dreams alive. An away win seemed unlikely, as the home side entered the game with an 11-3 record and just one less at the U.S. Bank Stadium. However, the Colts immediately started pushing on the gas, closing the first quarter up 17-0 and closing the half leading 33 to nothing, having scored two return touchdowns, one from a blocked punt and the other from an interception.

The Vikings immediately started scoring once they went back on the field after halftime, closing the third quarter down 36-14. A heroic display from quarterback Kirk Cousins, running back Dalvin Cook, and wide receiver K.J Osborn led the home side to tie the game with two minutes left in regulation sending it to overtime. In overtime, Minnesota was able to deny Indianapolis a shot to win the game and managed to set up a winning field goal with three seconds left in the game to cap off a historic comeback of over 33 points.

After two Super Bowl runs in 1990 and 1991, the Buffalo Bills finished the 1992 regular season fourth in the AFC, meaning that they would host the number five seed, the Houston Oilers, in the Wild Card Round. Due to a finger injury suffered during a loss against the Oilers in the last week of the regular season, Bills star quarterback Jim Kelly had to sit out against the Oilers, with backup Frank Reich taking control of the offense. The Oilers took advantage of this and started off strong, leading 28-3 at halftime after a stellar first half from their quarterback Warren Moon.

Despite starting the second half giving up a 58-yard pick-six, the Bills quickly turned things around in the third quarter behind four touchdowns from Frank Reich and great plays from the special teams, who recovered an onside kick, and the defense that picked off Moon. The Bills would go on to score another touchdown in the fourth quarter before the Oilers tied the game at 38 to go to overtime. There, the Bills’ defense intercepted Warren Moon again. The Bills gave the ball to running back Kenneth Davis, who put the team in field goal range. A field goal from Steve Christie would, thus, complete the biggest comeback in NFL playoff history.

Quarterback Matt Ryan was on the wrong end of the biggest comeback in both regular season and Super Bowl history as he was under center for the Colts in 2022 and for the Falcons in Super Bowl LI in 2016.

Led by their MVP quarterback, the Atlanta Falcons beat the Green Bay Packers in the NFC Championship to reach the second Super Bowl in their history. Despite their stacked-up offense with Pro Bowl running back Devonta Freeman and First-team All-Pro receiver Julio Jones, the Falcons still entered the game as underdogs. However, that did not seem to affect Atlanta, who went up 21-3 at halftime.

The Falcons came out strong after halftime, scoring another touchdown and extending their lead to 28-3 before the Patriots scored their first touchdown at the end of the third quarter. A costly fumble set up another Patriots touchdown to open the fourth, while a miraculous catch from Julian Edelman led the Patriots to tie the game and send it to overtime. There, the Falcons did not even get a chance on offense, as a rushing touchdown from James White gave the Patriots their fifth title in the biggest comeback in Super Bowl history.

Pages Related to What Is The Biggest Comeback In An NFL Football Game?