What Is Cover Defense In Football? 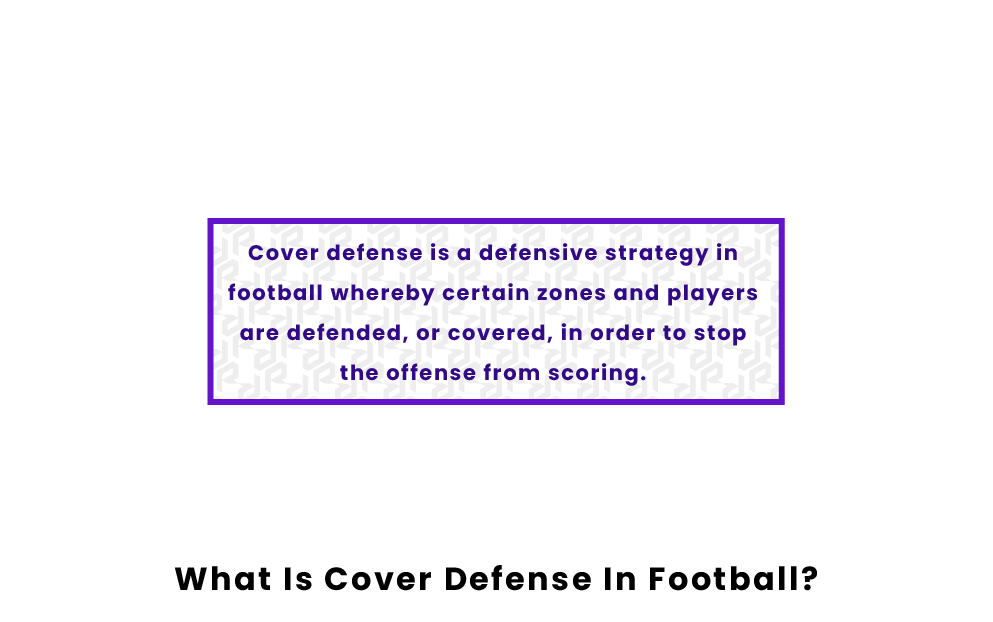 What Is Cover Defense?

Cover defense is a defensive strategy in football whereby certain zones and players are defended, or covered, in order to stop the offense from scoring.

What are the Types of Cover Defense?

The six main types of cover defense are:

The types of coverage are split between man and zone defenses. Covers 0 and 1 are man defenses that focus on putting pressure on the quarterback and stopping short offensive moments such as short passes and running plays. Covers 2, 3, and 4 refer to how many safeties are placed deeper into the defensive backfield. For example, cover 2 has two safeties guarding deep downfield, while cover 4 has four safeties covering the long pass.

The main goal of the deep covers is to stop deep passes and long-yardage gains. The final cover, cover 6, is very similar to cover 3 in that three defenders operate in zones deep downfield. However, in cover 3, the zones evenly split the field into separate zones, while cover 6 has uneven zones and focuses on stopping offensive action on a specific side of the field.

Pros of Man To Man Coverage

The main benefit of man-to-man coverage is its ability to even the playing field. This type of defense is broken down based on the skill and speed of the players. Normally, the most skilled and fastest defender will be assigned to cover the most skilled offensive player on an opposing team.

By creating matchups between players based on skill, the defense has the capability to limit any offensive potential of the other team. This style of coverage also allows for the individual talents of each defensive player, such as cornerbacks, to be utilized to their highest potential. The concept of man-to-man coverage is best used for short passing plays and running plays.

Cons of Man To Man Coverage

The biggest con of man-to-man coverage is the potential for defensive breakdown. If a matchup between the defender covering a player is good, man-to-man coverage works really well. However, as soon as a matchup doesn't work, or a defender breaks down and allows a completion, then the whole defensive unit falls apart, and the opposing team can gain a massive amount of yardage. The defensive strategy of man-to-man defense is also not fluid, meaning adapting to changes in an offensive lineup is very difficult to do on the fly.

The biggest benefit of zone coverage is its adaptability. The idea of having certain players cover certain sections means that if a certain offensive player can’t have an individual matchup with a defender due to a skill gap, the defense can instead focus on covering the zone that the offense utilizes to gain yardage.

The strategy of zone defense is best used when the attacking team uses deep passes to break down the defense. If zones deep downfield can be effectively covered by the defensive unit, then the offense will be forced to switch to short passes and running plays. Zone coverage is incredibly effective when a defensive team lacks speed and is outmatched on a skill level by the offensive squad.

The biggest flaw of zone defense is the holes that exist between zones. There aren't enough defenders on a field at one time to cover every yard of the field, and there will always be a gap between at least one of the zones of defense. If the offensive units can manage to exploit these defensive weak points, then the defense will completely break down and fail to protect the end zone from being entered. Zone defense can also be ineffective against running plays, as the defensive zones always focus on the back half of the field.

Pages Related to What Is Cover Defense In Football?