What Does A Rusher Do In Football? 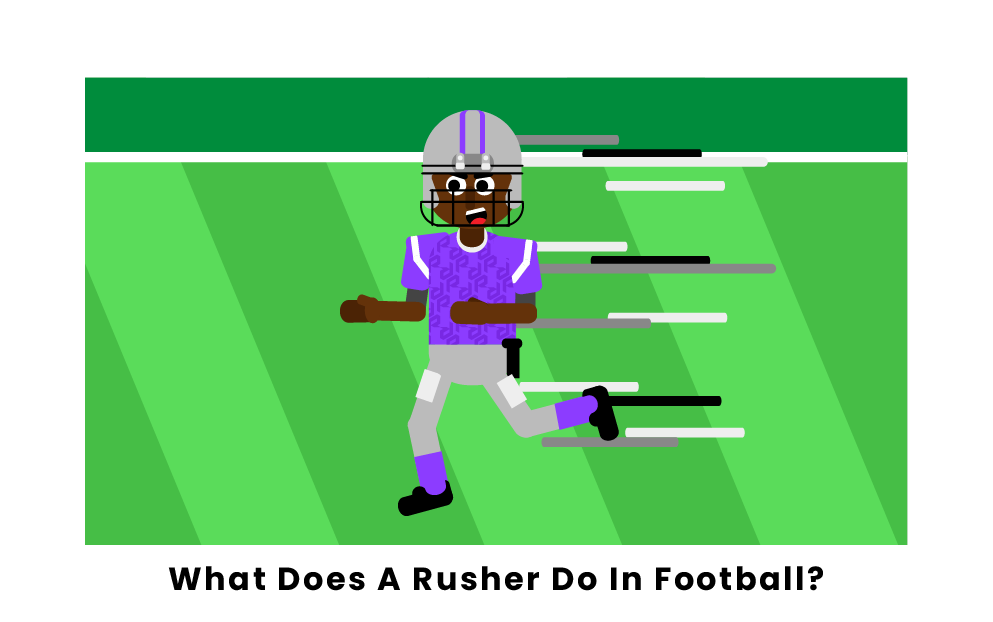 A rusher in football is a defender whose job is to attack the quarterback. There are multiple positions that can be regarded as “rushers.” Read below to learn about the different rush positions.

The outside linebacker has three main jobs in football: rush the quarterback, drop in coverage, and stop the run. However, the primary job of the outside linebacker is to go after the signal-caller. This position is synonymous with the term “edge rusher” because they’re the ones who rush from the outermost point. Usually, the outside rusher stands in a ready position rather than having their fingers in the dirt. This is because they’re smaller than defensive linemen but also quicker and faster. The man who’s credited for creating this position is Pro Football Hall of Famer Lawrence Taylor. In 13 seasons, L.T. was selected as a first-team All-Pro eight times and compiled 142 career sacks.

The defensive end has very similar jobs to the outside linebacker in terms of rushing the quarterback. Defensive ends can also be considered “edge” rushers because they attack the quarterback from the outside. However, the end lines up on the line of scrimmage. Defensive ends also rush differently and don’t drop in coverage as much. They need to be bigger so they can overpower the offensive line because of where they line up. In other words, they possess less speed but more power. A textbook example of a defensive end rusher is J.J. Watt. Watt is 6’5” and 288 lbs, and he has used his power and short-area quickness to accumulate over 100 sacks in his career, including two seasons with over 20 sacks.

What does a rusher do in football?

A rusher in football tries to sack the quarterback. The rusher is also responsible for stopping the run and covering mostly tight ends and running backs, although sometimes they’re matched up against a receiver in the slot.

What is a rusher in football?

A rusher is a broad term for a football player whose main job is to rush the quarterback. There are two positions that place a premium on attacking the quarterback: the outside linebacker and the defensive end. Both positions can fall under the category of “edge” rushers. Interior rushers also exist, but their main job is to stop the run.

Pages Related to What Does A Rusher Do In Football?