What Are The Best Seats At A Football Game? 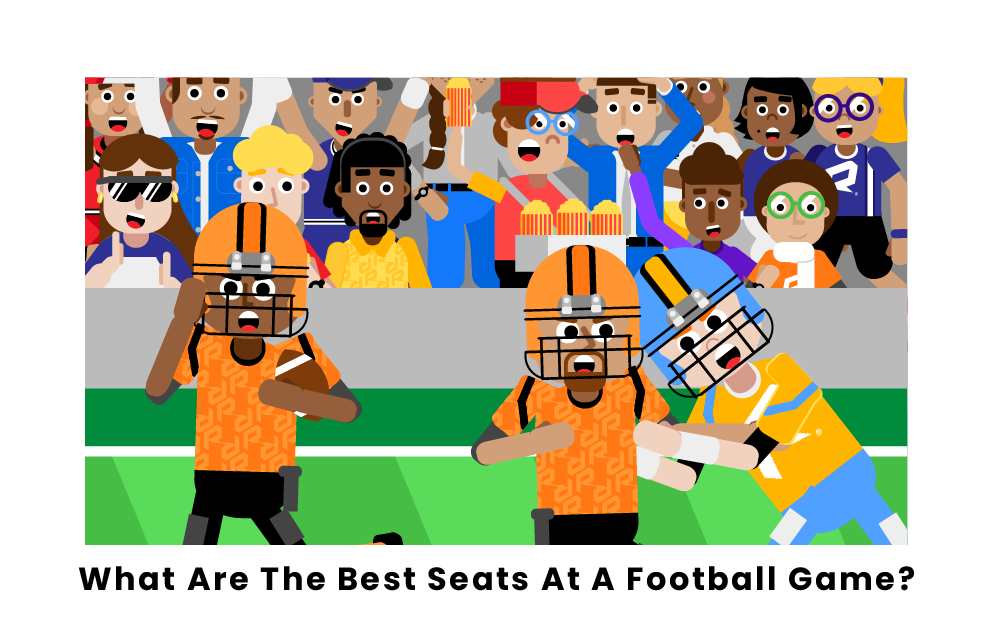 Going to American Football games is one of the most exhilarating experiences a fan can have. Rather than just viewing the game on a television screen, people often pay hundreds, if not thousands of dollars to watch football games in person. Below is a general guide for the best places to sit at an NFL game.

The 50-yard line is the middle of a standard football field, and it provides the viewer with the most consistent viewing lens for the entirety of the game. Anywhere aligned with the center of the field is a very good seat. However, the best place to sit on the 50-yard line is around 10-20 rows up. This section allows someone to have full vision of the field and turn their head in equal directions both ways to watch the game. Also, a person doesn’t usually have any obstructions in this area of the stadium.

Most people would think the first row would provide the best experience, and to an extent, that’s not wrong. The first row gives the viewer a more up-close experience; they’re super close to the players, can hear their chatter, and may even be able to banter with them. That’s a lot tougher to do 10-20 rows up. However, in the front rows, it’s tougher to see the field because the players and personnel will unintentionally block your vision.

Sitting near or at the upper deck on the 50-yard line is also not a bad option. These seats provide a great view and have nothing to restrict your view of the field. The issue is that it may be slightly harder to see from higher in the stadium, but upper bowl seats are a cost-friendly alternative to lower bowl 50-yard line seats.

A luxury suite is exactly what it sounds like, luxurious. Fans fortunate enough to secure one of these tickets will get an experience unlike anyone else at the game. Amenities at the majority of NFL stadiums include private restrooms, couches, refrigerators, drink services, multiple television screens, air conditioning, and food that’s only available for that particular suite. Luxury suites are the best seats for fans that have no price limit for tickets.

In normal seating, people can only watch the game that’s going on and maybe another if they’re using a handheld device. However, in suites, a person can comfortably watch multiple games at the same time while the one they’re at is going on.

But, there’s one massive advantage to sitting in a suite, and it applies to any outdoor stadium, windows. Football is played in all sorts of conditions, whether it’s extremely hot, cold, snowing, raining, windy, etc. The game only stops if it’s an extreme weather situation, such as lightning or a tornado. A luxury suite gives fans the option of watching the game in person without sitting outside in less-than-ideal weather. NFL games can also get very loud, so a suite could also help lower the crowd noise and provide more privacy.  However, there are a few disadvantages to luxury suites.  Firstly, they are often located high up in the stadium, so the view through the windows may not be as good as in the lower bowl. Secondly, luxury suites do isolate fans from the rest of the stadium, which may make their experience of exciting plays less memorable.

Club level seating is similar to that of luxury suites, except that it is not private. Fans in these sections of the arena still get better food than the general concession stands and higher-quality bathrooms, which is because it’s usually a concourse for those who have club access. Club level seats are great options for fans that aren’t limited by a budget but also don’t want a private suite.

The style of club seating varies among stadiums. In most stadiums, the club level is located between the lower and upper bowls, and people don’t always have to have a ticket in this area. They only need to have “club access” printed on their ticket.

The second type of club access is much more exclusive and operates like a suite. Think of the luxuries provided with a private suite, but that’s not really private. In this type of seating, it’s not just a room; it’s a section. A perfect example is at Hard Rock Stadium in Miami, Florida. Hard Rock Stadium has what’s known as the “‘72 Club,” which is located in the lower bowl between sections 144-148. People in this section have access to their own private television sets at their seats, couch seating, and even have their own small sections to keep privacy. However, food is shared among all members as it’s more buffet style.

How much do football tickets cost?

Where do team owners sit in football stadiums?

In general, football team owners sit in a special area of the stadium, which is commonly referred to as the “owner’s box.” Usually, the owner’s box is one of the stadium’s many luxury suites, which is reserved specifically for the owner, their family, and other invited guests. Naturally, most owners’ boxes are not open to the public, as they are filled by people the team owner has invited to join them for the game.

Is the end zone a good place to sit at a football game?

While they are not the best seats in a stadium, those in the end zone can still provide a good fan experience. Some fans consider the upper level sections of the end zone seats to be the worst in the house. However, other fans enjoy the vantage point that the upper level provides, with views of the entire stadium. Modern stadiums are designed with fans in mind and most seats have good sightlines. The lower levels can also provide an intimate and engaging experience when your team is in the red zone, attempting to score in the end zone in front of which you are sitting.

Pages Related to What Are The Best Seats At A Football Game?