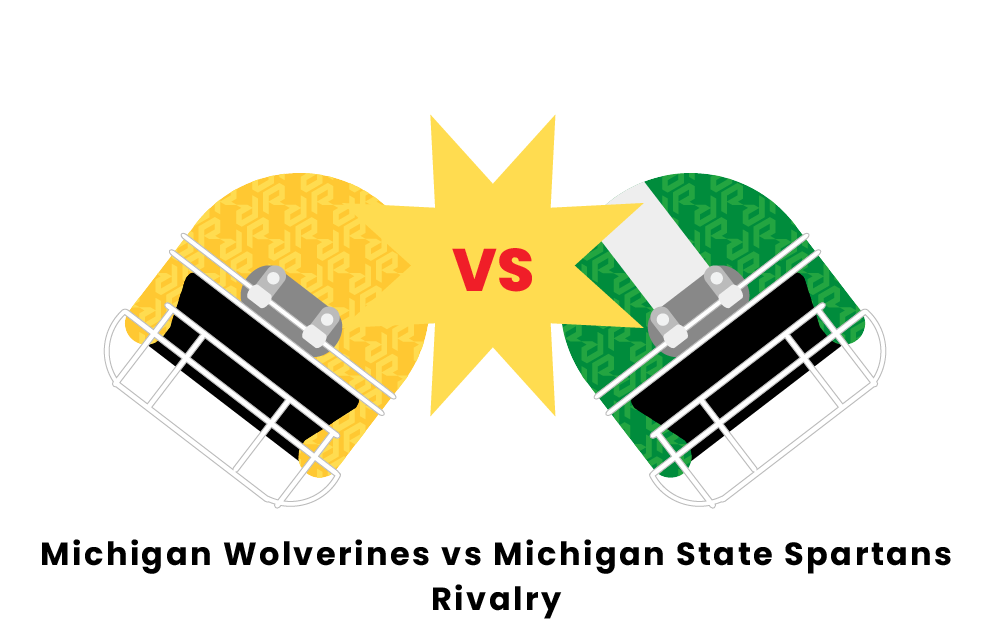 College football is one of the most-watched sports in the United States, drawing in huge crowds of fans and television viewers every year. Fans of the sport love the intense matchups between the hundreds of teams that participate in NCAA college football due to the excitement of the sport itself and the rivalries that it has spawned. Among these many memorable feuds, the rivalry between the Michigan Wolverines and the Michigan State Spartans is undoubtedly one of the most well-known.

The rivalry between the Michigan Wolverines and the Michigan State Spartans is one of the oldest in college football history, going back well over a century. The first game played between the two colleges occurred on October 12, 1898, with Michigan defeating Michigan Agricultural College (which later became Michigan State) by a score of 39-0. Over the next three years, Michigan played its freshman team against Michigan Agricultural College, which went through many name changes over the years, finally adopting the name Michigan State University in 1964. Those first three years turned into a long rivalry that lasted decades and has since brought the two schools together in competition well over 100 times.

One of the more notable traditions in the Wolverines-Spartans rivalry is the exchanging of the Paul Bunyan Trophy. Officially known as the “Paul Bunyan-Governor of Michigan Trophy,” the award was made a part of the Michigan-Michigan State feud in 1953. It is a four-foot statue of famed lumberjack Paul Bunyan, a figure in American folklore. The statue stands atop a five-foot base, bringing its total height to nine feet. It was first presented to Michigan State by Michigan Governor G. Mennen Williams in honor of the university’s acceptance into the Big Ten Football Conference. Since then, the trophy has been exchanged between Michigan and Michigan State based on who wins in their annual game.

Though Michigan State won the trophy in its first year, defeating Michigan 14-6 in 1953, the trophy has more often gone to the Wolverines, particularly in the 1970s and mid-1980s, when Michigan defeated the Spartans 13 out of 14 times to win the trophy. The annual battle for the Paul Bunyan Trophy still captures the hearts of fans across Michigan and the rest of North America, keeping the great rivalry between the two schools alive.

Michigan State at Michigan on October 8, 1902

The second game in the Michigan-Michigan State rivalry, this matchup in 1902 is notable for being Michigan’s biggest-ever win against the Spartans, ending in an astounding 119-0 victory for the Wolverines. Michigan’s offense averaged 3.1 points per minute in the game, which was played in two twenty-minute halves, utterly annihilating the Spartans.

Michigan at Michigan State on November 3, 2001

Known by various names such as “Clockgate” and the “Spartan Bob Game,” this memorable loss for Michigan occurred when the No. 6 ranked team was stunningly defeated 26-24 by the Spartans after a game-winning touchdown by T.J. Duckett, delivered by quarterback Jeff Smoker. Many observers believed that the clock had started too late, giving Michigan State the extra second they needed to win. The clock operator for the game, Bob Stehlin (later named “Spartan Bob”), even received threatening letters for his perceived mistake. However, he insisted that no mistake was made, with the officials agreeing.

Another shocking win for the Spartans; this game featured a crucial flubbed punt that was retrieved by Michigan State’s Jalen Watts-Jackson, who ran 38 yards for the winning touchdown. This secured a 27-23 win over the Wolverines.

Another exciting comeback game, this matchup was unique among the faceoffs of the Spartans and Wolverines due to its taking place in the midst of the global COVID-19 pandemic. With football and other sports gradually returning after months of forced shutdowns, the No. 13 Michigan team sought to defeat Michigan State. However, they were defeated in another stunning upset, losing 27-24 after the Spartans took a commanding lead early in the game, stifling a Wolverines comeback.

Fielding Yost was one of the most influential head coaches in Michigan’s history and started with the team in 1901. He became famous for implementing his “point-a-minute” strategy, which successfully led Michigan to outscore their opponents 555-0 overall. In his first four years as coach, Yost went undefeated, and he amassed an overall total of 198 wins and only 35 losses with the Wolverines. He was later named the university’s athletic director.

A former star player for the Wolverines, Jim Harbaugh was the team’s quarterback from 1981-1986, ending his career as a fifth-year senior before being drafted into the NFL. He played for a number of teams, including the Chicago Bears, the Indianapolis Colts, the Baltimore Ravens, and the Carolina Panthers, among others. Harbaugh later went on to coach the Oakland Raiders, college teams for San Diego and Stanford, and the San Francisco 49ers before he returned to Michigan as a head coach in 2015, where he earned a respectable record of 61-23 from 2015-2021, including a Citrus Bowl win in 2015 and a BIG 10 Championship in 2021.

A notable head coach for the Michigan State Spartans, Mark Dantonio was responsible for leading the team to three Big Ten titles, an appearance in the college football playoffs, and a team-record 114 wins in his 13-year career with the Spartans. Among his many accomplishments was an 8-5 winning streak against the Wolverines, Michigan State’s rivals. He resigned his position abruptly in February 2020 after a lawsuit by a former staffer alleged that Dantonio had committed multiple recruiting violations. The lawsuit and subsequent appeals were later dismissed.

A major player for the Wolverines, Charles Woodson began his career with the team in 1995, becoming a starting player in only his second game and continuing as a starter for 34 straight games, winning the honor of Big Ten Freshman of the Year in 1995. Woodson received many other awards during his time at Michigan, including a Heisman Trophy in his junior year. He ended his college career with a total of 18 interceptions and 30 defended passes, and was selected fourth in the 1998 NFL Draft, joining the Oakland Raiders.

Why are Michigan and Michigan State football rivals?

Michigan and Michigan State are college football rivals for several reasons. Firstly, the two teams hail from the same state, meaning that they have a territorial claim on fans. The rivalry between the two teams also has a long history. Finally, the teams are both part of the Big Ten Conference, which is known not only for sporting prowess, but also for academic distinction, so the competition between them is stronger than most other schools.

When did the rivalry between Michigan and Michigan State start?

The rivalry between Michigan and Michigan State stretches back to the later years of the 19th century. The two teams first met in 1898, back when Michigan State was known as Michigan Agricultural College. Since then, the two schools have met on the field well over 100 times, and though the Michigan Wolverines have the all-time edge, the Spartans have pulled off a number of key upsets over the years, keeping the intense rivalry alive.

What is the Paul Bunyan Trophy?

The Paul Bunyan Trophy is an award exchanged between the rival teams of Michigan and Michigan State. Created in 1953 to celebrate Michigan State’s acceptance into the Big Ten Conference, the two schools have exchanged the trophy amongst themselves ever since, with the award going to whichever school wins their annual game. The statue itself is a four-foot-tall wooden sculpture of Paul Bunyan (a famous lumberjack of American folklore who represents the state of Michigan) on a five-foot base with both teams’ logos on it.