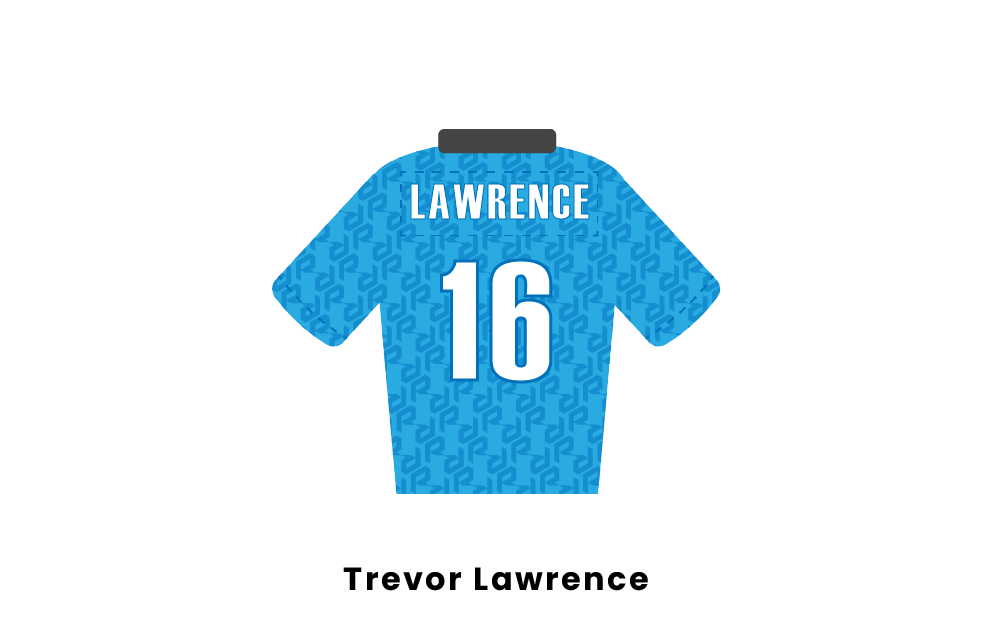 Trevor Lawrence is a quarterback for the Jacksonville Jaguars in the National Football League. He was selected 1st overall in the 2021 NFL draft after three very successful years at Clemson. He is most known for winning the College Football Playoff National Championship as a freshman in 2019. He was born in Knoxville, Tennessee, on October 6, 1999. He attended Cartersville High School in Cartersville, Georgia, where he played football and basketball. Lawrence only lost one game in his four-year varsity football career. He threw 161 touchdown passes and only 21 interceptions with well over 13,000 passing yards. This led to Trevor getting ranked a five-star recruit and becoming one of the best football prospects the NFL has ever seen.

It is unclear exactly what Trevor Lawrence's net worth is. It was estimated to be just over $1 million before getting drafted. When he was drafted, he signed a four-year-long $36.8 million contract. He has many endorsements with Gatorade, Adidas, Fanatics, and Blockfolio. The details of the endorsements are private, but it is estimated that his net worth could reach over $50 million soon. Lawrence hasn’t shown the best of his abilities on the field yet, but if he improves and becomes the player he was projected to be, his net worth could skyrocket.

Trevor Lawrence began his career in 2021 when he was drafted first overall by the Jacksonville Jaguars. He started in all 17 games in his rookie year. Lawrence threw 12 touchdowns and 17 interceptions while leading his team to three wins. He joined a very young and rebuilding Jaguars team, and the future is looking bright. Lawrence signed a four-year, $36.8 million contract as soon as he was drafted. He has played for three different head coaches in one and a half seasons. Lawrence has had a slow start to his NFL career, but the future looks bright.

Trevor Lawrence is married to his high school sweetheart Marissa Mowry. In the summer of 2020, Lawrence attended various Black Lives Matter protests with some of his teammates at Clemson. He did a lot to educate himself on the topic and has been an activist in support of all of his teammates. He is a Christian with strong religious beliefs. Oftentimes, he will pose for his older brother, Chase Lawrence, who is a visual artist. Trevor is known for being laid back and not “too crazy” on social media. His parents are Amanda Lawrence and Jeremy Lawrence. His mother, Amanda, is a nurse. His dad, Jeremy, is an environmental and safety manager. He currently lives in Jacksonville with his wife. Most of his day-to-day activities involve something football related.

Who Is Trevor Lawrence?

Trevor Lawrence is an American football quarterback who plays for the Jacksonville Jaguars. He was drafted first overall in the 2021 NFL Draft. He played three seasons at Clemson University, where he won one national championship. He made the College Football Playoffs in all three years at Clemson. He only lost two games in his time at Clemson. He holds the record for most passing yards and passing touchdowns for a high school quarterback in the state of Georgia.

What School Did Trevor Lawrence Play For?

Trevor Lawrence played college football at Clemson University. He won the national championship with Clemson in 2018, where he became the first true freshman quarterback to win one since 1986. He took over for Kelly Bryant and took the team all the way. He only lost two games while at Clemson and became the first Clemson football player to be drafted first overall.

Where Was Trevor Lawrence Born?

Trevor Lawrence was born in Knoxville, Tennessee, in 1999 to parents Amanda and Jeremy Lawrence. However, he ended up going to high school in Georgia, college in South Carolina, and now plays in Florida. So although he was born in Tennessee, he has moved around a lot throughout his life.