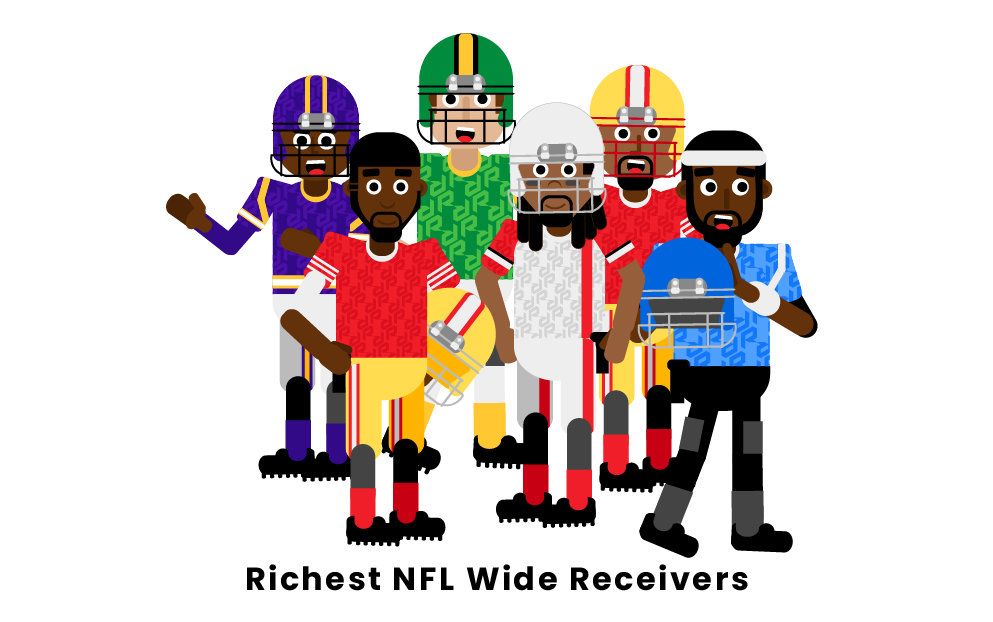 NFL owners continue to pay their players an exorbitant amount of money. With the game growing, TV deals expanding, and more tickets being sold, contracts continue to rise for players. This gives football players from all over the field an opportunity to earn, but wide receiver is one position that truly benefits. Receivers find the end zone most frequently, thus creating tons of buzz, opportunities for endorsement deals, and a chance to make a lot of money.

Who are the richest NFL Wide Receivers of all time?

Jerry Rice is considered one of the greatest wide receivers in NFL history, and he has accumulated a net worth of around $50 million. While his playing career took place much earlier than the other five receivers on this list, he still made a ton of money. In his 20-year playing career, Rice made nearly $42 million from his contracts alone. This figure includes a four-year contract with the Raiders that was worth just over five million dollars. Following Rice’s career, the receiver co-authored two books and played Hal Gore in the movie Without a Paddle: Nature’s Calling. Rice also managed to star in commercials and was even on Dancing with the Stars in 2005-2006. With Rice’s heavy involvement off of the field, the celebrity found many ways to make even more money on top of his football career.

Larry Fitzgerald made most of his money on the football field and has a net worth that stands at $50 million. Drafted in 2004 by the Arizona Cardinals, Fitzgerald immediately made a big impact on the field with a combined 2,189 receiving yards in his first two seasons. With Fitzgerald having five 1,000-yard seasons in his first seven years in the NFL, the Cardinals gave him an eight-year contract worth $120 million in 2011. That contract tied with defensive lineman Richard Seymour for the fifth-highest in the NFL at the time. That contract is the main contributor to Fitzgerald’s high net worth and puts him toward the top of the richest NFL wide receivers. That being said, he’s also had sponsorship deals and business ventures with companies and brands like Nike, Nokia, Lenovo, and a minority stake ownership in the Phoenix Suns.

While still playing in the NFL, Julio Jones has managed to have a net worth of $50 million. Jones was drafted in 2011 by the Atlanta Falcons and was immediately one of the best receivers in the NFL. In 2015 and 2018, Jones had over 1,600 receiving yards. This led the Falcons to give Jones a contract that made him one of the highest-paid wide receivers NFL  ever in 2019. The contract was three years worth $66 million in total, and it was fully guaranteed. In 2021, Jones’ salary stood at $11.5 million with the Tennessee Titans after there was contract restructuring to turn some of the salary into a signing bonus.

Calvin Johnson had a much more abbreviated NFL career than Jerry Rice and Larry Fitzgerald but still manages to have a net worth of $45 million. In seven of Johnson’s nine NFL seasons, the receiver had over 1,000 receiving yards. Johnson also led the NFL in receiving yards in 2011 and 2012. Due to his remarkable skills at wide receiver, the Lions gave Johnson a seven-year deal worth $113 million in 2012, but Johnson did not finish that contract as he retired in 2016. Following Johnson’s playing career, he and his wife, Brittney, opened a medical cannabis dispensary in Michigan in 2019. The dispensary, which Johnson hopes to expand, combined with his NFL career, contributes to his high net worth.

DeAndre Hopkins is the youngest player on this list but still has a net worth of $40 million. Hopkins entered the NFL in 2013 with the Houston Texans and put up two 1,000-yard seasons in his first three years. This helped him earn a five-year contract worth $81 million with the Texans in 2017. However, in 2020, Hopkins was traded to the Cardinals, where he got a new two-year contract worth $54 million. Hopkins has also earned his money through a multitude of endorsement deals, including ones with Beyond Meat, BioSteel, Oars & Alps, and Nike’s Jordan Brand.

AJ Green has had a long and successful career in the NFL, contributing to his net worth of $40 million. Green was drafted by the Cincinnati Bengals in 2011 and signed a four-year contract worth nearly $20 million. After four consecutive 1,000-yard seasons, he signed a five-year extension with the Bengals that was worth up to $70 million. After that contract was up, he signed a one-year deal worth $12 million with the Bengals before landing on the Cardinals in 2021 for just $3.5 million. Injuries derailed his potential to earn even more in the NFL, but Green has some endorsements to keep him paid, namely with Beats by Dre and American Family Insurance.