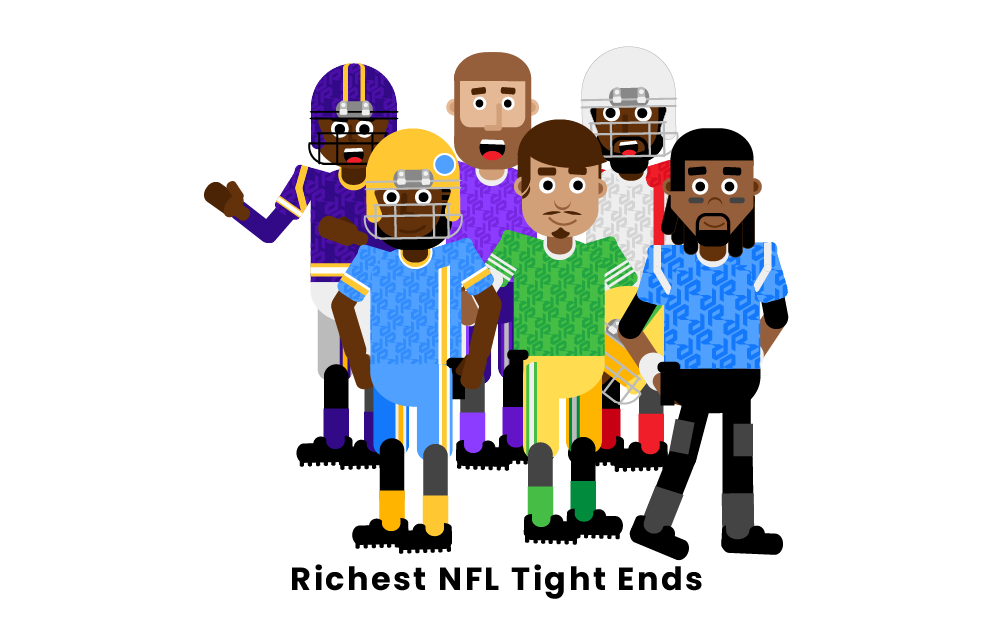 The tight end position is one of the more important positions in football because of its impact on the offense. The best tight ends have an incredible ability to block and catch the football. As they are dual threats, tight ends make a lot of money; however, they also have opportunities to make money off of the field.

Who are the richest NFL Tight Ends of all time?

Tony Gonzalez had a stellar football career while acquiring a net worth of $50 million. Gonzalez has had four 1,000-yard seasons in his 17-year NFL career, which was good enough to earn him three separate five-year contracts. The most expensive contract Gonzalez signed came in 2007, when he signed a five-year deal worth up to $31 million. After Gonzalez retired from the NFL in 2013, the tight end became a studio analyst for CBS before moving to FOX in 2017. Prior to the 2021 NFL season, Gonzalez stepped down to focus on film projects.

Rob Gronkowski is one of the most successful tight ends in NFL history, and he has been able to grow his net worth to $45 million. Gronkowski started his NFL career in 2010 and had immediate success. In the tight end’s first nine seasons with the New England Patriots, Gronkowski made the Pro Bowl five times and was a First-Team All-Pro four times. Gronkowski retired in 2019 but then came out of retirement to join quarterback Tom Brady in Tampa with the Buccaneers. Gronkowski also has investments in several businesses, including Gronk’s Hot Sauce and Gronk Fitness Products. Additionally, Gronkowski has a contract with WWE and has made appearances on the shows Entourage and Family Guy that contribute to his large net worth.

With all of Ditka’s work in football, he has a net worth of roughly 35 million dollars. Mike Ditka was drafted in 1961 by the Chicago Bears and was a five-time Pro Bowler. After retiring in 1972, Ditka took an assistant coaching job with the Dallas Cowboys. The former tight end then became the head coach for the Bears in the 1980s and the New Orleans Saints in the late 1990s. Ditka continued working in football after coaching as he became a studio analyst and color commentator between the Bears and Saints head coaching jobs for NBC. His high net worth is also due in part to movie appearances, most notably in the film Kicking & Screaming with comedian Will Ferrell.

Greg Olsen has been able to accumulate a net worth of around $16 million. Olsen was selected by the Chicago Bears in the first round of the 2007 NFL Draft and did not have much success in the early stages of his NFL career. After not being a true focal point of the Bears’ offense, Olsen was traded to the Carolina Panthers in 2011 and was a Pro Bowler in 2015. Following the 2015 season, Olsen signed a three-year extension worth up to $22 million. When he played through that contract, Olsen signed a two-year $17 million deal to stay with the Panthers in 2018, followed by a one-year $7 million contract with the Seattle Seahawks in 2021. Olsen continues to add to his net worth post-retirement as a color commentator and analyst for FOX.

Shannon Sharpe was a late-round pick in the 1990 NFL Draft by the Denver Broncos and currently has a net worth of $14 million. Sharpe made only $250,000 in his first two seasons in the league. Sharpe then helped the Broncos win two Super Bowls, which resulted in him earning two contracts, one worth $3.6 million over three years in 1994 and the other worth $7.5 million over three years in 1997. In 2000, Sharpe signed a four-year contract worth up to $13.8 million with the Ravens. Finally, in 2002, Sharpe went back to Denver with a $16 million contract over seven years. However, Sharpe only played two of those seasons before retiring. When Sharpe retired, he continued building upon his net worth as a studio analyst for CBS. In 2016, Sharpe joined Fox Sports and currently has a show with Skip Bayless called “Undisputed.”

With Jason Witten’s 17-year NFL career and a brief broadcasting stint, the former tight end has a net worth of $12 million. Witten was drafted in 2003 by the Dallas Cowboys and had a rookie contract worth just over $2 million for four years. Following the 2006 season, where he was a Pro Bowler, Witten signed a six-year extension worth $27.6 million. Witten went on to have three 1,000-yard seasons in the next four years, which was good enough to earn a new five-year contract worth $37 million. Witten eventually retired from the NFL after the 2017 season and spent 2018 in the broadcast booth as a color commentator for ESPN’s Monday Night Football coverage. That was only for one season, as he came out of retirement and signed a one-year deal worth $4.5 million with the Cowboys in 2019. The next season was his final one, during which he played for the Las Vegas Raiders.