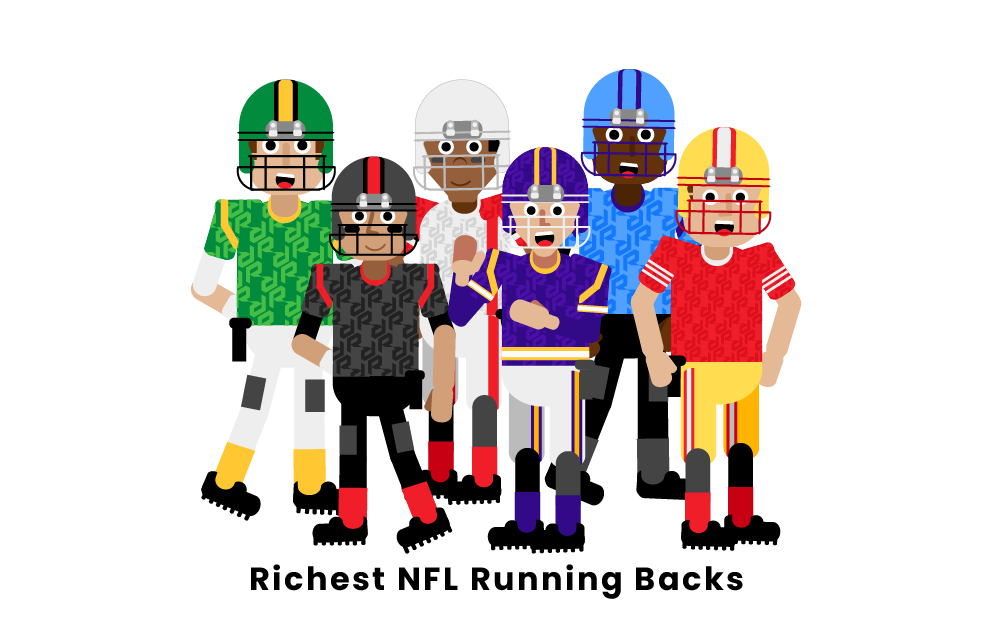 For years, running backs in the NFL have consistently been devalued, and many players are seen as 'replaceable' despite their immense talent and necessity for an effective offense. Still, many have managed to succeed financially throughout their careers regardless, and this list will highlight the top six richest RBs in history.

Who are the richest NFL Running Backs of all time?

The former University of Tennessee and Houston Texans Running back Arian Foster is tied for the richest NFL running back in history with Gale Sayers at $50 million total net worth. Foster was initially an undrafted free agent coming out of the 2009 NFL Draft and signed a deal that only paid him $310,000 with a $75,000 signing bonus for his rookie year, but went on to earn a total of $36,930,000 over seven years with the Texans. After four Pro-Bowl Selections and an All-Pro Selection, Arian retired from the NFL and turned to investments to further increase his net worth.

Considered one of the greatest running backs of all time, the former University of Kansas and Chicago Bear legend Gale Sayers is tied for the richest NFL running back in history with Arian Foster at $50 million total net worth. Sayers made a decent amount of money over his career in the NFL, during which he was also a four-time Pro Bowl selection, five-time AP First-Team All-Pro selection, a three-time Pro Bowl Co-MVP, and a two-time NFL rushing champion before being enshrined in the Pro Football Hall of Fame in 1977. Yet, most of Sayers' net worth is attributed to his highly successful Crest Computer Supply Company he founded in 1984, which was eventually renamed Sayers40.

Edgerrin James, the former University of Miami, Seattle Seahawk, Arizona Cardinals, and Indianapolis Colts running back, has been able to acquire a net worth of around $40 million. James is one of the most successful and one of the wealthiest NFL running backs in history. With over 13 years in the NFL, James made $54,116,000, which was the main contributor to his $40 million current net worth. After being drafted in 1999 by the Colts, James went on to win AP Offensive Rookie of the Year, earn four Pro Bowl Selections, and receive an All-Pro Team selection. Eventually enshrined in the Pro Football Hall of Fame in 2020, James did more than enough to justify his selection.

Jim Brown is one of the most iconic players ever to grace the gridiron, and his net worth stands at around $30 million. His years at Syracuse University and as a pro with the Cleveland Browns brought him into the spotlight. However, his net worth was not solely funded through his incredibly successful NFL career; despite his nine Pro Bowl and three MVP Award selections, he only made around $400,000 during his time as a professional. Jim Brown found most of his financial success off the field as an actor, where he was one of the first African American action movie stars and appeared in over eight separate films.

Frank Gore is a living legend and one of the longest-tenured running backs in NFL history; the former University of Miami running back has a net worth of $30 million. Most of Gore's wealth was accumulated during his 16-year career as a professional, playing with the San Francisco 49ers, New York Jets, Miami Dolphins, Buffalo Bills, and Indianapolis Colts. Gore was incredibly influential in the NFL, where he made five Pro Bowls and set records as the 49ers’ all-time leader in attempts, rushing yards, and rushing touchdowns. He made $30,242,000 total during his time through his various contracts.

LaDainian Tomlinson, former Texas Christian University, San Diego Chargers, and New York Jets running back, was a generational talent during his time in the NFL as a professional and accumulated a $25 million net worth. Tomlinson made most of his earnings through his craft on the field, where he was widely successful, amassing five Pro Bowl selections, being named an All-Pro six times, being awarded the NFL MVP in 2006, and getting enshrined in the Pro Football Hall of Fame in 2017. During his time in the league, Tomlinson made $56,875,500 over 11 years as a pro, making $52,975,000 over nine years with the Chargers and $3,900,500 in two years with the New York Jets before retiring.