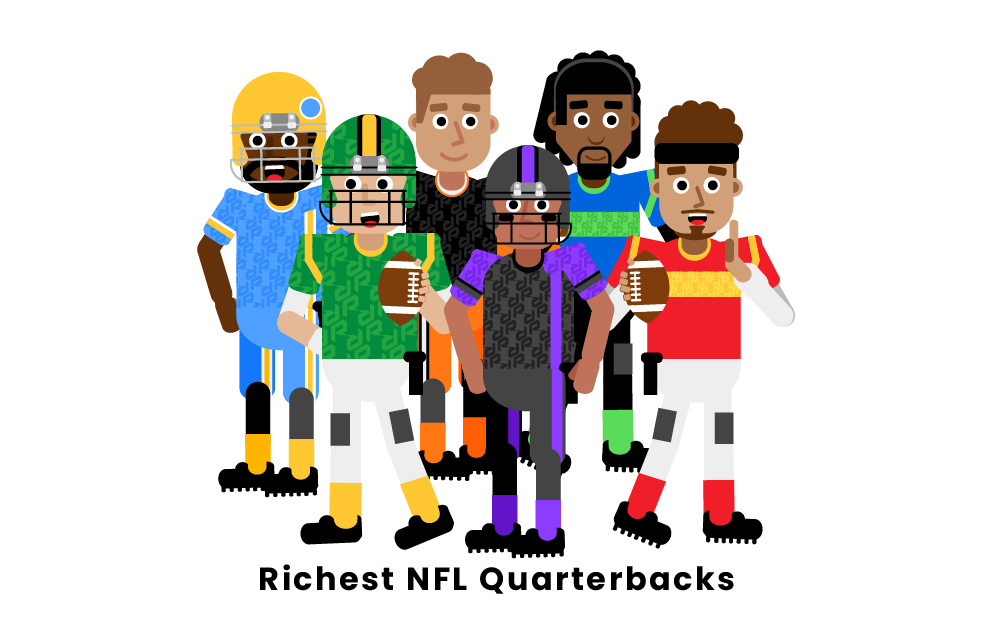 Over the years, the National Football League (NFL) has evolved into a multi-billion-dollar industry. Those who have often benefited the most from this money and exposure are those playing the position of quarterback. Quarterbacks are typically the stars of their team, and not only do they often get the highest salaries, but they use their stardom to make money off the field. Below is a list of the top six richest quarterbacks in NFL history.

Who are the richest NFL Quarterbacks of all time?

Roger Staubach, who played for the Dallas Cowboys from 1969-1979, currently has an estimated net worth of $600 million. This is despite the fact that during his NFL career, Staubach never made more than $160,000 in a given season. Roger would go on to make the vast majority of his money during his post-playing career, capitalizing off of the stardom he had obtained while playing for the Cowboys.

In 1977, as his NFL career was winding down, Staubach started a real estate company with his friend Robert Hollaway Jr. that was dubbed the Staubach Company. Working with companies such as AT&T and McDonald’s, the Staubach Company quickly rose in value. Staubach served as chairman and CEO of the company until he stepped down in 2007, and the company was sold soon after in 2008 for $613 million. Staubach also earned some of his net worth by becoming a partial owner of Hall of Fame Racing, a NASCAR Sprint Series Cup Team.

Fran Tarkenton played for the Minnesota Vikings and New York Giants from 1961-1978 and currently has an estimated net worth of $300 million. Throughout his playing days, Tarkenton made a total of $1.2 million, never making more than $250,000 in a single season.

Again, like Staubach, Tarkenton was able to have a successful business career to make the bulk of his earnings. He founded a computer-program generator company called Tarkenton Software, which eventually merged with a similar company known as Knowledge Ware. This merged company went public in 1989, and by 1991, Tarkenton’s share was worth $50 million. Fran currently owns Tarkenton Financial, GoSmallBiz, and Tarkenton Teleconferencing, as well as $100 million in Apple stock and $15 million in real estate.

Peyton Manning played for the Indianapolis Colts and Denver Broncos from 1998-2015 and has a net worth that is currently estimated at $250 million. Since he played in a more recent and thus more lucrative NFL, Manning was able to earn millions of dollars just in playing salary. His rookie contract was worth over $7 million a year, and he made as much as $19.2 million in a season. In total, Manning earned $248 million in salary during his playing days.

Outside of football, Manning signed several endorsements with companies that include Papa Johns, Nationwide, and Gatorade. Currently, Manning works for ESPN as an NFL analyst, and, in the 2021-2022 season, he and his brother Eli hosted a simulcast of ESPN’s showing of Monday Night Football, called the “ManningCast”, on ESPN2.

As arguably the greatest quarterback of all time, Tom Brady has an estimated net worth of $250 million. He famously played for the New England Patriots from 2000-2019 and has played for the Tampa Bay Buccaneers since 2020. Like Manning, Brady has been able to obtain millions of dollars from his football contract alone. In 22 seasons, Brady has earned over $302 million in salary, including over $39 million in 2021 alone.

Brady has made over $100 million in endorsement deals throughout his career from companies like Under Armour, Sam Adams, and Footlocker. Brady has also started some of his own companies, most notably TB12 Sports, a fitness regime aimed at helping athletes get in peak physical condition. In 2021, Brady also co-founded autograph.io, a website that helps people both create and sell digital collectibles. It was announced that Tom Brady inked a $375 million deal with Fox Sports to become an NFL analyst following his retirement from playing professionally.

Steve Young played for the Tampa Bay Buccaneers in 1985-1986 and the San Francisco 49ers from 1987-1999, earning a net worth currently valued at $200 million. Young earned his first few million dollars playing in the United States Football League (USFL) for the Los Angeles Express from 1984-1985. While he initially signed a $40 million contract, Young only ended up earning about $4.2 million due to the league and team folding in 1985. Afterwards, Young would go on to make $49 million in salary in his 15 NFL seasons.

In his post-playing career, Young has had several business ventures to help raise his career net worth. He helped to co-found an equity firm with the help of billionaire Jon M. Huntsman called Huntsman Gay Global Capital (HGGC). Currently, Young serves as an NFL analyst for ESPN and earned $2 million last season as an analyst for Monday Night Football.

Drew Brees played for the Los Angeles Chargers from 2001-2005 and the New Orleans Saints from 2006-2021, and his current net worth is $160 million. Due to his recent retirement, the vast majority of Brees’ net worth came from his playing days. During his 20-year career, Brees earned just over $269 million in salary. Once his playing days were over, Brees’s first venture was to join the NBC broadcast team for their showing of Sunday Night Football as well as NBC’s coverage of Notre Dame football. Starting in 2022, Brees signed a 2-year, $50 million dollar contract with NBC.

Eli Manning, a two-time Super Bowl winner with the New York Giants, has a net worth estimated at $160 million. He played his entire 16-year career with the Giants, becoming the face of the franchise during his time. Manning was the MVP in both Super Bowls he won. Eli is the younger brother of Peyton Manning, who together are two of the best quarterbacks the NFL has ever seen. He now hosts a Monday Night Football stream called the “ManningCast,” in which Eli and Peyton Manning provide commentary while watching the game.

Joe Montana is considered by many to be one of the best quarterbacks to ever play in the NFL, and has a net worth of an estimated $150 million. Montana played in the NFL for 16 seasons, 14 of those years with the San Francisco 49ers. He is a four-time Super Bowl winner and three-time Super Bowl MVP. Montana was known for his clutch performances in the biggest games, winning several games in the last minute, including a Super Bowl victory in Super Bowl XXIII with 36 seconds left on the clock. After retiring, Montana dabbled in the finance world, becoming a partner at a hedge fund, which contributed even more to his already large net worth.

John Elway played for the Denver Broncos 1983-1998 and currently has an estimated net worth of $145 million. During his epic 16-year career, he made a total $25 million in salary earnings plus an additional $20 million in bonus signings. After the NFL, he continued to make millions by working as a consultant for the Broncos. Like many athletes, Elway has also spent much of his retired years making sponsored endorsements for companies such as Nestle, Sprint, Chevrolet, and Neptune Krill Oil. Between his work as a consultant and occasional brand ambassador, Elway continues to make an estimated $3 million per year off the field.