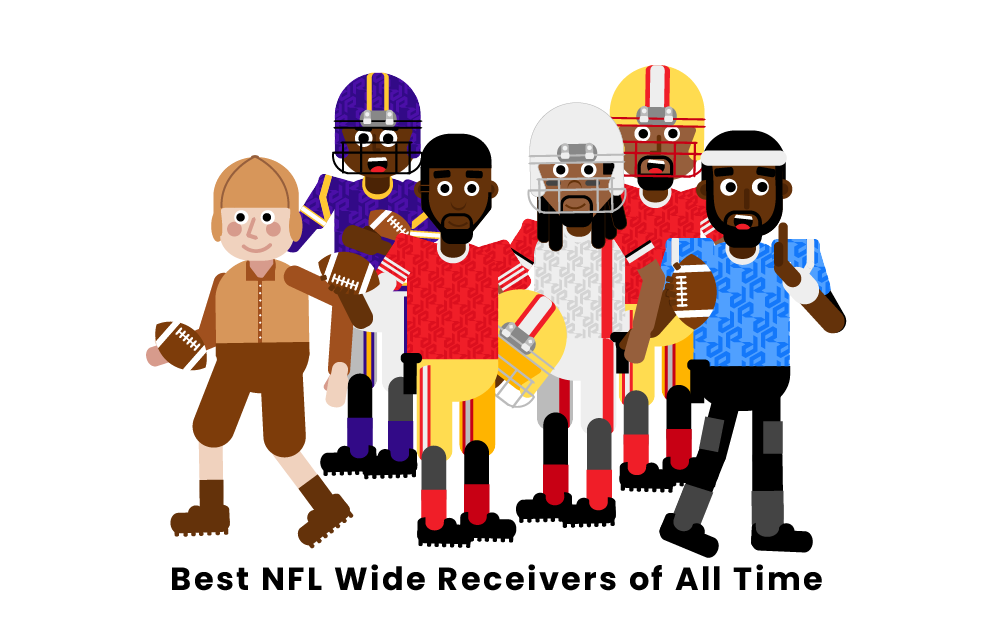 Throughout the history of the NFL, there have been many talented wide receivers who have made jaw-dropping catches, ran meticulous routes, demonstrated astonishing speed, and recorded impressive statistics. However, a few checked all of these boxes and then some, proving to be the very best of the best. Listed below are the top six best NFL wide receivers of all time.

Who are the best NFL wide receivers of all time? 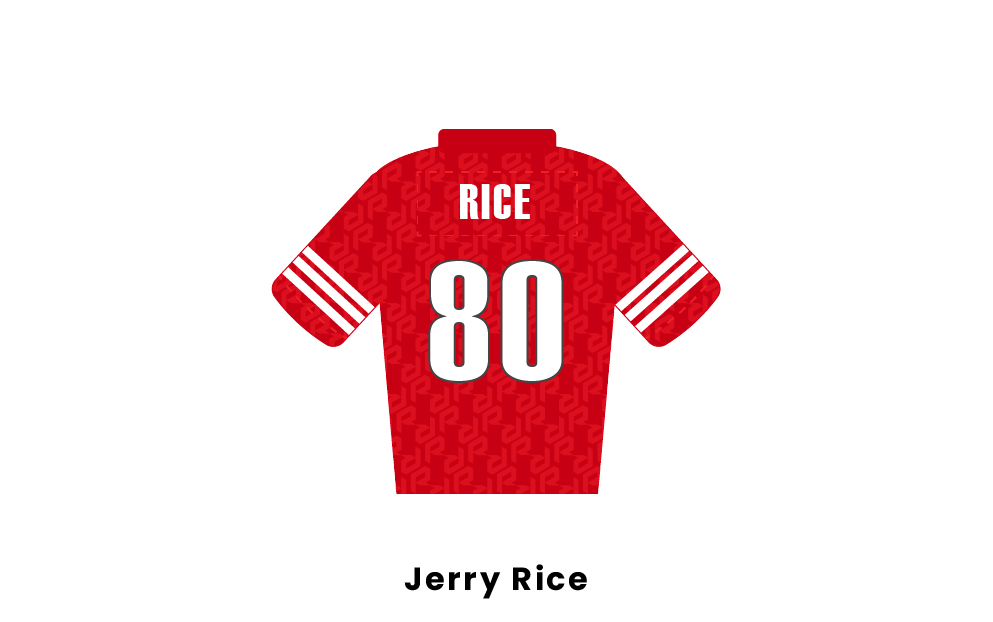 Jerry Rice is considered the NFL’s best wide receiver of all time. In 1985, he was selected in the first round of the NFL Draft by the San Francisco 49ers. Not wasting any time, Rice began to break new records every season he competed. He led the league in receiving yards and touchdown receptions six times throughout his career. He also broke the record for most touchdowns in a single season with 22 in 1987 and broke the record for most receiving yards with 1,848 in 1995. Rice played in the NFL for 20 seasons, longer than any other wide receiver, and continues to lead the league in receptions (1,549), receiving yards (22,895), and total touchdowns (208).

Terrell Owens was drafted in the third round of the 1996 NFL Draft by the San Francisco 49ers. Owens played alongside Jerry Rice on the 49ers for several seasons and closely followed in his footsteps, making impressive plays and recording extraordinary statistics. For five seasons, he led the 49ers in receptions and is second in franchise history after Rice in receptions (592), yards (8,572), and touchdowns (81).

After his time with the 49ers, Owens also played for the Philadelphia Eagles, Dallas Cowboys, Buffalo Bills, and Cincinnati Bengals. He made it to Super Bowl XXXIX with the Eagles, where he recorded nine receptions and 122 yards. By the time he retired, Owens was ranked second all-time in total yardage and third all-time in touchdown receptions. 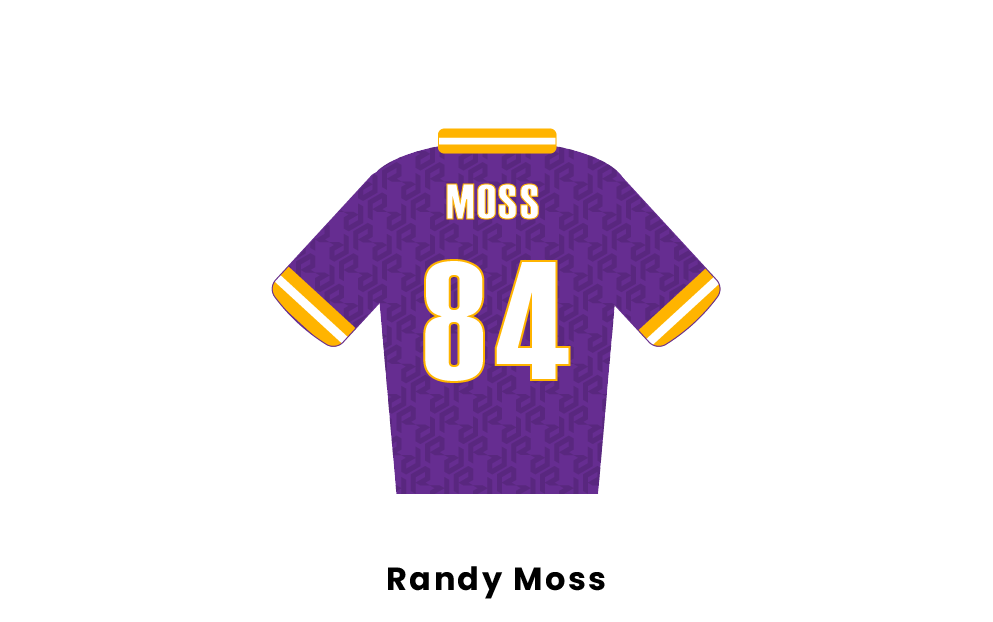 Randy Moss was drafted in the first round of the 1998 NFL Draft by the Minnesota Vikings. He went on to play for the Oakland Raiders, New England Patriots, Tennessee Titans, and San Francisco 49ers. In his first season, Moss broke the record for the most touchdown receptions by a rookie with 17 and also was awarded AP Offensive Rookie of the Year. At the conclusion of his time with the Vikings, Moss finished second in team history in receiving yards (9,316), touchdowns (93), and receptions (587). In 2007, Moss set the record for the most touchdown receptions in a single season with 23. By the time he retired, Moss was ranked third in career receiving yards and fourth in career touchdowns.

Don Hutson joined the NFL in 1935, signing a contract with the Green Bay Packers. Hutson was a revolutionary player, bringing many new techniques to the art of receiving, including buttonhooks, Z-outs, and hook-and-go’s. Furthermore, he led the league in receiving eight different years and scoring for five consecutive years. Besides playing offense, Hutson also competed on the defensive side of the ball, playing as a skilled safety who recorded 30 interceptions in his final six seasons in the league. By the time he retired in 1945, Hutson had set 18 records, including 99 career touchdowns, which remained the league record for over 40 years.

Larry Fitzgerald was drafted third overall in the 2004 NFL Draft by the Arizona Cardinals. He played all 17 of his seasons with the Cardinals, proving to be one of the best players in franchise history. Throughout his time in the league, Fitzgerald led the NFL in receiving touchdowns and receptions twice. He was also awarded the prestigious NFL Walter Payton Man of the Year Award and selected as an NFL First-Team All-Pro. Fitzgerald holds the franchise record for practically all receiving statistics, including receptions, receiving touchdowns and yards, and total touchdowns. Furthermore, he has the most career receptions in history with a single team with 1,432 and holds the longest streak for games with at least one catch for a single team with 256.

Steven Largent was one of the best wide receivers of both the 1970s and the 1980s, achieving a remarkable 819 receptions and over 13,000 receiving yards. In 1976, he was drafted to the Seattle Seahawks. Over his long career of 14 seasons with the team, Largent was selected for the Pro Bowl seven times, scored 100 receiving touchdowns, and was the NFL’s leader in receiving yards for two separate seasons (1979, 1985). He served the Seahawks well until the very end, even being named NFL Man of the Year during his final season. For his impressive performance, Steven Largent was selected to the NFL 1980s All-Decade Team and was inducted into the Pro Football Hall of Fame in 1995.

Marvin Harrison was one of the most consistent and reliable wide receivers in history, achieving over 1,000 yards and 10 touchdowns each season for 10 straight years. He played for the Indianapolis Colts, starting in 1996 when they selected him 19th in the draft. Most of Harrison’s time on the Colts was spent catching passes from star quarterback Payton Manning. With Manning at the helm, Harrison and the Colts defeated the Bears in Super Bowl XLI. Harrison was an eight-time Pro Bowler and has been selected to the NFL 2000s All-Decade Team and 100th Anniversary All-Time Team. He was inducted into the Pro Football Hall of Fame in 2016.

Who is the greatest NFL wide receiver of all time?

Jerry Rice is the greatest NFL wide receiver of all time. He played for a total of 20 years in the NFL: 15 seasons with the San Francisco 49ers, four with the Oakland Raiders, and one with the Seattle Seahawks. During his lengthy career in the league, Rice set the record for most career receptions (1,549), yards (22,895), and touchdown receptions (197). He still holds the record in all three categories and will likely do so for a long time.

What NFL wide receiver holds the record for most receiving yards all time?

What NFL wide receiver holds the record for the most receiving touchdowns all time?