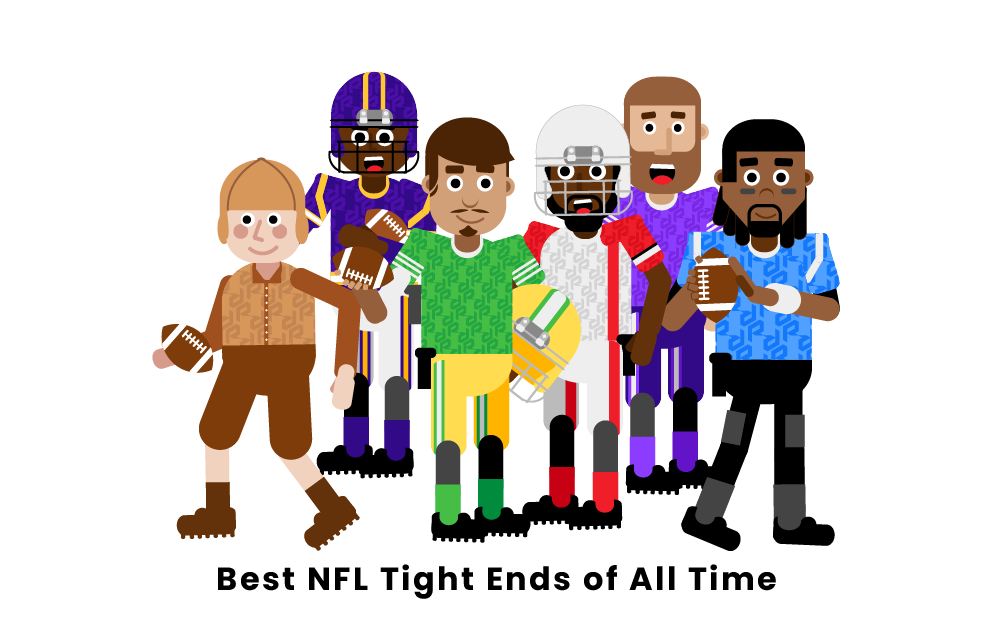 One of the most valuable positions on any good football team is the tight end. Tight ends are hybrid players that can function simultaneously as linemen and wide receivers. Because of this, tight ends are dangerously adaptable players, able to function in many different ways depending upon the type of play or strategy being used. On account of this versatility, some of the most famous NFL players in history have been tight ends. Here, we look at the top six best NFL tight ends of all time.

Who are the best NFL tight ends of all time?

A Pro Football Hall of Famer, Tony Gonzalez enjoyed a sterling career as an NFL tight end from 1997 to 2013, playing for both the Kansas City Chiefs and the Atlanta Falcons. Gonzalez was a first-round draft pick in 1997 and was selected as a tight end by the Kansas City Chiefs, whom he played for over the following 12 seasons. After leaving the Chiefs in 2008, Gonzalez was picked up by the Falcons, playing five more seasons before his retirement in 2013. At the time of his retirement, Gonzalez had broken the NFL’s all-time records for both touchdowns and yards as a tight end, securing 111 touchdowns and 15,127 yards over the course of his career. Antonio Gates went on to break his touchdown record, but Gonzalez still holds the record for all-time receiving yards gained by a tight end. Gonzalez also became the NFL’s all-time leader for consecutive starts, with 120 unbroken starts over the course of his career, along with 14 Pro Bowl appearances. Gonzalez missed only two games during his career and earned a second-place ranking among all players in catches, with 1,325 total receptions. After retiring from the NFL, Gonzalez appeared as a studio analyst and commentator for various NFL-affiliated cable networks, including CBS and FOX, and has also started a podcast called “Wide Open with Tony Gonzalez.”

Three-time Super Bowl Champion and Pro Football Hall of Famer Shannon Sharpe is arguably one of the most recognizable names in the NFL today, both from his time on the field and in the studio as an analyst and commentator. Sharpe’s long and accomplished career began in 1990 when the Denver Broncos selected him in the seventh round of that year’s NFL Draft. Sharpe played for Denver from 1990-1999, and then briefly played for the Baltimore Ravens from 2000-2001, before returning to Denver for a final stint from 2002-2003. Between 1992 and 1998, Sharpe was voted to seven consecutive Pro Bowls. He also received four first-team All-Pro honors and was chosen to be the first-team tight end for the All-Decade NFL Team of the 1990s.

Over his 14-year career, Sharpe accumulated 815 receptions and 10,060 yards, as well as 62 touchdowns, making him a top 5 tight end in each of those three categories. He also holds records for the longest reception in a postseason game (96 yards in the 2000-2001 AFC Championship) and for the most receiving yards by a tight end in one game (214). In 2011, Sharpe was inducted into the Pro Football Hall of Fame. Since his retirement, Sharpe has made a name for himself on the media side of his sport, serving as an analyst for both CBS and FOX and as a radio host for Sirius XM’s NFL morning program, “Opening Drive.” He is currently the co-host of “Skip and Shannon: Undisputed,” a sports opinion and debate program which airs daily on FS1, in which Sharpe debates fellow co-host Skip Bayless on various sports topics of the day.

Four-time Super Bowl Champion Rob Gronkowski, known lovingly to his fans as “Gronk,” needs no introduction on this list. As one of the most outstanding tight ends of the modern NFL, Gronkowski’s ongoing career has drawn many eyes, and not merely for his impressive 6’6” stature. After attending the University of Arizona, Gronkowski was selected by the New England Patriots with the 42nd overall pick in the second round of the 2010 NFL Draft. Gronkowski immediately established a special connection with the Patriots’ all-time great quarterback, Tom Brady, and quickly became one of his favored receivers. In Week 10 of his first season, Gronkowski achieved a Patriots record by becoming the team’s first rookie tight end (and the youngest in NFL history) to catch three touchdown passes in a single game. Merely two weeks later, Gronk repeated the feat against the Indianapolis Colts, breaking the NFL record for touchdowns scored in a single season by a tight end. Gronkowski also broke Kellan Winslow’s 1980 record for receiving yards in his first season with New England, surpassing Winslow’s 1,290 yards with 1,327 of his own. In the seasons that followed, Gronkowski was instrumental to three of the Patriots’ Super Bowl victories in 2014, 2016, and 2018. He briefly retired from football in 2018, serving as a studio analyst for FOX for one year, before returning to football in 2020 and joining the Tampa Bay Buccaneers, where he was reunited with Tom Brady and earned his fourth Super Bowl Ring. Gronkowski’s career with Tampa Bay is ongoing, so he may find himself higher on this list before all is said and done.

Three-time first-team All-Pro player and eight-time Pro-Bowl tight end Antonio Gates had a long career as a tight end in the NFL, playing for the Los Angeles Chargers (formerly the San Diego Chargers). Gates was signed on as an undrafted free agent by San Diego in 2003 and accumulated 24 receptions, 389 yards, and two touchdowns in his rookie season. Over the course of 11 seasons, Gates was selected to the Pro Bowl eight times, was a three-time Chargers Offensive Player of the Year, and was a three-time first-team All-Pro player. Gates has the most multi-touchdown games in NFL history amongst tight ends, having scored multiple times in 21 games throughout his career. Gates also broke Tony Gonzales’ all-time record for the most touchdowns scored by a tight end, accumulating 116 total touchdowns by the end of his career. Additionally, Gates amassed 955 receptions and 11,841 receiving yards in his career with the Chargers. Gates officially retired from football in January of 2020.

Pro Football Hall of Famer Kellen Winslow is another of the many tight ends in the history of the NFL who boasted a stunning, record-shattering career. Winslow was drafted to the San Diego Chargers in 1979, with his selection resulting from a draft-day trade the Chargers made with the Cleveland Browns to secure Winslow as a first-round pick. In his career with the Chargers, which spanned from 1979 to 1987, Winslow played in five Pro Bowls and was named the co-player of the game in the 1982 Pro Bowl.

In his first season, Winslow earned a solid 25 receptions before a knee injury sidelined him in Week 7. However, he returned with a vengeance in 1980, accumulating 89 receptions and 1,290 yards. In both the 1981 and 1983 seasons, Winslow secured 88 catches, and over the four-year period from 1980 to 1983, he amassed a total of 319 receptions. After missing many games in 1984 and 1985 due to a second knee injury, Winslow returned and racked up three more top-notch seasons from 1985-1987, before a final knee injury forced him to retire in 1987. In total, Winslow earned 541 receptions, 6,741 yards, and 45 touchdowns in nine seasons. His record performance of 1,290 yards in the 1980 season stood until 2010 when it was broken by Rob Gronkowski. Winslow was inducted into the Pro Football Hall of Fame in 1995.

The final tight end on our list, Jason Witten, enjoyed a long career in the NFL, playing for both the Dallas Cowboys and the Las Vegas Raiders. Witten was drafted by Dallas in the third round of the 2003 NFL Draft and played for the Cowboys until 2017, followed by an initial retirement, and then a return to Dallas in 2019, and a final season for the Raiders in 2020. As a Cowboy, Witten accumulated a number of team and NFL records. He was first in career receptions for Dallas, with a total of 1,089, and also first in receiving yards for the Cowboys, with 12,448 in his career with the team. Witten has the second-most receptions and receiving yards by a tight end and is one of only two tight ends in NFL history with 12,000 yards. He also made history for being only the second tight end in NFL history to accumulate more than 1,000 receptions. After his ultimate retirement in 2021, Witten ended his career with 1,228 receptions, 13,046 receiving yards, and 74 receiving touchdowns.

Ozzie Newsome was a tight end in the NFL who played his entire 13-year professional football career with the Cleveland Browns. After a successful college career at Alabama, Newsome was selected with the 23rd pick of the 1978 NFL Draft. While he never played in or won a Super Bowl, Newsome put up astounding individual statistics. He finished his NFL career with 662 receptions, 7,980 receiving yards, and 47 touchdowns. Newsome was voted into the Pro Football Hall of Fame in 1999.

Mike Ditka played in the NFL for 11 years, from 1961-1972, and in that time, he played for the Chicago Bears, the Philadelphia Eagles, and the Dallas Cowboys. Ditka was a well-known receiving tight end while playing for Chicago, for whom he was the number one draft pick in 1961. Ditka’s high number of pass receptions made him one of the first truly receiving tight ends, as the position at that time had largely been a blocking one. Over the course of his rookie year, Ditka made 56 catches for 1,076 yards, along with an impressive 12 touchdowns. Across both the Bears and the Eagles, Ditka managed an 86-game starting streak, until a 1967 injury broke that trend. Slumping a bit with Philadelphia, Ditka surged back to life when he joined the Cowboys, helping them to their Super Bowl VI victory. Ditka’s accolades made him a clear choice for the Hall of Fame in 1988, and after retiring, he went on to head coach for both the Bears and the New Orleans Saints.

John Mackey’s legacy as a tight end survives in the John Mackey Award, which is given out every year to the most successful tight end in college football. Joining the Baltimore Colts in 1963 as a Number 2 Draft Pick, he played nine seasons for the team, before playing a final season with the San Diego Chargers. Mackey was known for his speed and ability to catch long passes. Despite many injuries, Mackey missed only one game in his career, and was also known as a kick returner. In Super Bowl V, he caught a deflected pass for a then-record-setting 75-yard touchdown. After his retirement, Mackey was a President of the NFL Players Association. He passed away in 2011, at the age of 69.

Who is the greatest NFL tight end of all time?

The greatest NFL tight end of all time is arguably Tony Gonzales, who played for the Kansas City Chiefs and the Atlanta Falcons from 1997 to 2013. In his career, Gonzales made NFL all-time records for both touchdowns and yards, securing 111 touchdowns and 15,127 yards over the course of his career, though his touchdown record was later broken by Antonio Gates. Gonzalez is also the NFL’s all-time leader for consecutive starts, with 120 over the course of his career, along with 14 Pro Bowl appearances. Gonzalez missed only two games in his career and earned a second-place ranking among all players in catches, with 1,325 total receptions.

Which NFL tight end holds the record for the most career touchdowns?

What tight end holds the record for the most receptions in NFL history?

Tony Gonzalez currently holds the record for the most receptions by a tight end in NFL history. Over the course of his career, Gonzalez racked up 1,325 receptions, along with 15,127 receiving yards (another NFL record) and 111 receiving touchdowns, a record which was broken by Antonio Gates.