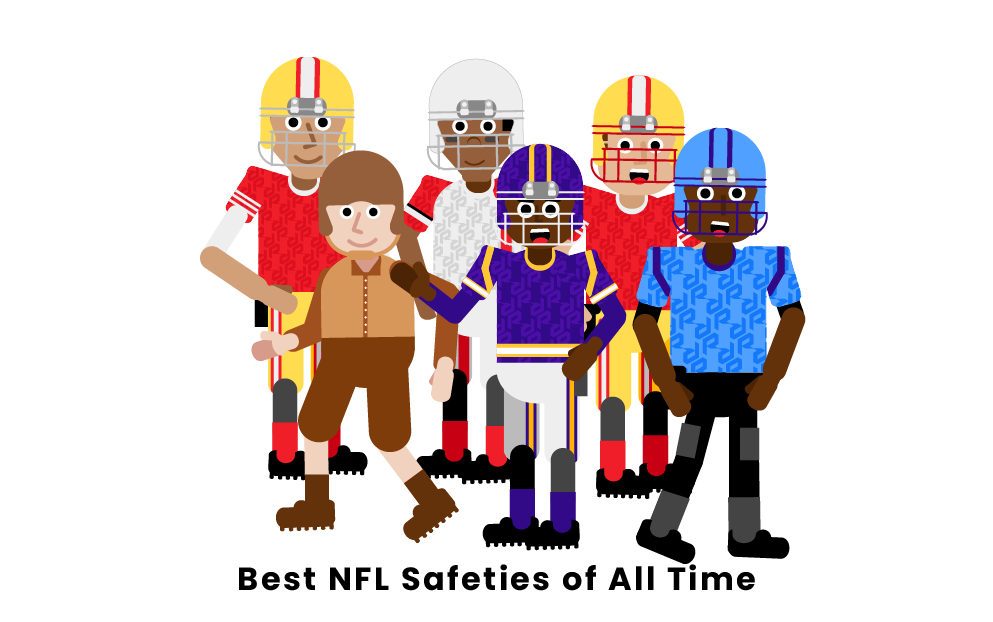 Safety is one of the most important defensive positions in football, as safeties are not only responsible for helping in pass coverage but also for coming up to help stop run plays. The best NFL safeties of all time are the ones that could lock down the league’s best wide receivers in coverage while also delivering big hits to stop the run game.

Who are the Best NFL Safeties of All Time?

Ed Reed is widely considered the best NFL safety of all time. Reed was drafted 24th overall in the 2002 NFL Draft by the Baltimore Ravens. Throughout his time in Baltimore, he consistently was one of the best pass defenders on the team, leading the team in interceptions in his rookie season along with seven other seasons during his career. Reed quickly established himself as one of the Ravens’ defensive leaders, helping the team reach four AFC North Division titles and three AFC championship games. In 2012, he helped the Ravens win Super Bowl XLVII against the San Francisco 49ers, where he had five tackles and one interception. By the time he retired, Reed had set the Ravens’ franchise record for most career interceptions (61) and most interceptions in a season (9).

Troy Polamalu was drafted 16th overall in the 2003 NFL Draft by the Pittsburgh Steelers, where he played for his entire 12 season career. Polamalu quickly became a force on the defense for the Steelers, delivering big hits and making remarkable plays. He also established himself as a leader, helping the Steelers reach the playoffs seven times, winning five division titles and two Super Bowls. In 2010, Polamalu had one of his best seasons and was awarded Defensive Player of the Year for his impressive seven interceptions and 63 tackles. Polamalu had recorded 32 interceptions with three returned for touchdowns, 107 passes defended, 14 forced fumbles, 12 sacks, and 783 total tackles by the time he retired.

Ronnie Lott was drafted eighth overall in the 1981 NFL Draft by the San Francisco 49ers. Lott immediately impacted the team, returning three interceptions for touchdowns and helping the 49ers win Super Bowl XVI in his rookie season. He proved to be a versatile player on defense and played both right and left cornerback along with free and strong safety. Lott was selected to the Pro Bowl for each of these positions a total of 10 times throughout his career. During his time with the 49ers, Lott helped the team to eight NFC West Division Titles and four Super Bowls. He also played for the Los Angeles Raiders and New York Jets before retiring with an impressive 63 career interceptions.

Brian Dawkins was drafted in the second round of the 1996 NFL Draft by the Philadelphia Eagles. He quickly became a defensive force for the Eagles, recording 74 tackles and three interceptions in his rookie season. Dawkins continued his success, leading the Eagles in interceptions in 1997 and 1998; he also led the team in tackles in 2002. Throughout the rest of his time in Philadelphia, Dawkins helped the team reach four NFC championship games and Super Bowl XXXIX. In 2009, he joined the Denver Broncos, where he had three successful seasons and retired with 1,131 tackles, 37 interceptions, 26 sacks, and 19 fumble recoveries.

Ken Houston was drafted in the ninth round of the 1967 AFL-NFL Draft by the Houston Oilers. He rapidly proved his talents on the field, earning himself a starting spot by the third game of his rookie season. Throughout his six seasons with the Oilers, Houston was awarded all-league acclaim twice, in 1969 and 1971. He also broke an NFL record by returning nine interceptions for touchdowns. In 1973, he was traded to Washington and immediately continued his success on his new team, earning All-Pro or All-NFC for the next six years. When Houston retired after the 1980 season, he finished with 49 career interceptions, 21 fumble recoveries, and 12 total touchdowns.

Emlen Tunnell entered the NFL in 1948 as a free agent, where he was signed by the New York Giants. Before entering the realm of professional football, Tunnell played college football at the University of Toledo and University of Iowa; he also served in the Coast Guard. After entering the NFL, Tunnell instantly began making history, becoming the first African American to play for the New York Giants. He became a key member of the Giants’ “Umbrella Defense,” serving as a prolific pass defender at the safety position. After 11 seasons with the Giants, Tunnell joined the Green Bay Packers for three seasons before retiring with a total of 79 career interceptions.

Yale Lary played for the Detroit Lions during their heyday, winning three NFL Championships in his 11-year NFL career. He played his entire career for the Detroit Lions, serving as a safety, punter, and return specialist. Thus, he was known for being one of the most versatile players the NFL has ever seen. Over his 11-year career, Lary racked up 50 interceptions for 787 interception return yards. Lary was named to the NFL 1950s All-Decade Team.

Cliff Harris is an interesting member of this list on account of the fact that he nearly missed out on playing in the NFL. In the 1970 NFL Draft, Harris was initially undrafted by any team, even the Dallas Cowboys, who were desperately searching for defensive secondary players. However, based on films of Harris’ performance in college, the Cowboys decided to take him on as a free agent. They did not regret that choice. After a period of compulsory military service, Harris became Dallas’ starting safety, and his tough, hard-hitting style changed the way people played the safety position. Harris earned 29 career interceptions and 16 fumble recoveries, and was a member of two Super-Bowl-winning Dallas squads.

Willie Wood was a member of the legendary Green Bay Packers squad that won the very first Super Bowl in 1967. His career with the team spanned 12 years, beginning in 1960 and ending in 1971, and also included three NFL Championship wins prior to the Super Bowl Era. Wood was a teammate of Emlen Tunnell, and learned from him on his way to racking up a comparable record while playing for Green Bay. In particular, Wood secured 48 interceptions over the course of his career, returning them for a total of 699 yards. One of his most famous picks came in the famed Super Bowl I game, with Wood intercepting a pass by Len Dawson and returning it 50 yards, which later led to the offense scoring. Wood was named to the Pro Bowl eight times, and also won the second-ever Super Bowl with Green Bay a year after Super Bowl I.

Who is the greatest NFL safety of all time?

Ed Reed is widely considered the greatest NFL safety of all time. Reed was selected to the Pro Bowl nine times and was named First-Team All-Pro five times throughout his career. He also recorded 64 career interceptions, nine defensive touchdowns, and led the league in interceptions in 2004, 2008, and 2010. In 2004, Reed was awarded Defensive Player of the Year and helped the Baltimore Ravens win the Super Bowl in 2013.

What NFL safety holds the record for the most career interceptions?

What NFL safety holds the record for the most Pro Bowl appearances?

Pages Related to Top 6 Best NFL Safeties of All Time