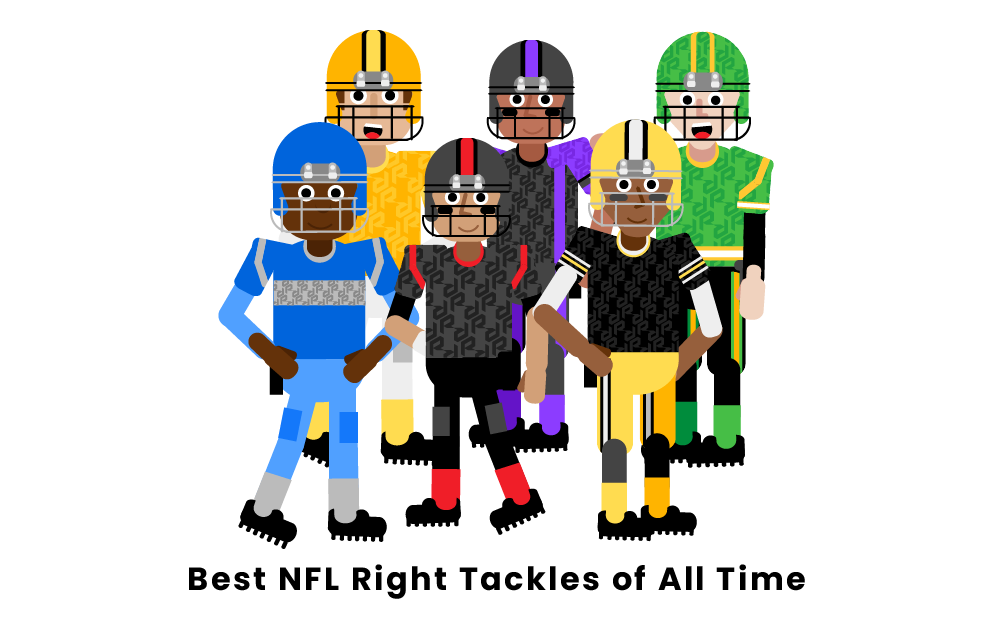 Many games are won and lost in the trenches in the NFL, and more often than not, the offensive line’s success is typically indicative of a team's success. Right tackle is one of the most vital parts of this integral positional group, and this list highlights the best right tackles of all time.

Who are the best NFL right tackles of all time?

Forrest Gregg was one of the greatest players to start on an NFL offensive line, playing right tackle for the Green Bay Packers and Dallas Cowboys from 1956 to 1961. During his career, Gregg was named to a record nine Pro Bowls, the most ever for a right tackle, and seven All-Pro teams, only two behind the record for a right tackle. Forrest's legacy is further cemented with his 1977 Hall of Fame induction, as well as his eventual placement on the Pro Football Hall of Fame All-1960s Team and the NFL 100th Anniversary All-Time Team.

Ron Yary was a dominant right tackle for the Minnesota Vikings from 1968 to 1980. From the time he stepped on the field for the Vikings at age 22, Yary delivered as a right tackle; he was named to an impressive six straight All-Pro teams from 1971 to 1976 and another seven Pro Bowls on top of that. After a highly successful career that resulted in numerous accolades, including being named to the Pro Football Hall of Fame All-1970s 2nd Team, his legacy eventually culminated in being enshrined as part of the 2001 Pro Football Hall of Fame class.

Joe Stydahar was one of the original great NFL right tackles; after being selected 6th overall by the Chicago Bears in the NFL's first official draft in 1936, Joe delivered beyond expectations. Over his career, Stydahar achieved numerous accolades and successes, including four Pro Bowl and All-Pro selections, winning three championships with the Chicago Bears, and being part of the Pro Football Hall of Fame All-1930s Team. He eventually became the first drafted player to be elected into the Pro Football Hall of Fame, a feat he achieved as a member of the 1967 class, a true mark of his talent and skill.

Mike McCormack was one of the best right tackles ever to play; he was first a part of the NFL's 1951 New York Yanks, where, as a rookie, he was named a starter and eventually named to his first of six eventual Pro Bowl selections. After this season, he was traded to the Cleveland Browns, where he continued to play for them from 1954 to 1962. After a very successful career that saw him win two NFL championships (1954 and 1955), McCormack was eventually recognized for his talent and named to the Pro Hall of Fame as a part of the 1984 class.

Rayfield Wright, often referred to as "Big Cat," was originally a 7th round pick in the 1967 NFL Draft and eventually turned that opportunity into a Hall of Fame career at right tackle. Wright played 13 seasons for the same team that drafted him, the Dallas Cowboys. Rayfield was initially a tight end and defensive tackle before becoming a starting right tackle in the 1970 season, where he thrived. Following the 1970 season, he was named to six consecutive First or Second Team All-Pro teams and six Pro Bowls. Wright also made five Super Bowl appearances in his career and was eventually inducted into the Pro Football Hall of Fame in 2006.

Jackie Slater was a right tackle for the Los Angeles Rams from 1976 to 1995 and was initially drafted in the third round of the 1976 NFL Draft. During his career, he had immense success, being named to seven Pro Bowls, earning five All-Pro selections, and being named to the PFR All-1980s First Team. When he retired, Slater's 259 games and 20 seasons with one team were the most ever by an offensive lineman and NFL records. He was recognized for his dominance by being inducted into the Pro Football Hall of Fame as part of the 2001 class.

Bob St. Clair, affectionately known as “The Geek” by teammates and fans, was an extremely dominant right tackle for the San Francisco 49ers during the 1950s and early 1960s. St. Clair spent almost his entire football career in the San Francisco Bay Area, attending high school at San Francisco Polytechnic and college at the University of San Francisco. He was drafted in the third round of the NFL Draft, and spent all 11 seasons of his career with the 49ers. While St. Clair never won an NFL Championship, he was selected to five Pro Bowls and made First-Team All-Pro five times. After his playing career of 119 games, he was voted into the Pro Football Hall of Fame in 1990.

While Dan Dierdorf played multiple positions on the offensive line, he was most known for his play at the right tackle position. He was drafted by the St. Louis Cardinals in the second round of the NFL Draft, and spent his entire 13-year career in St. Louis. While there, he was a force to be reckoned with, being selected as the best offensive linemen in the league in 1976, 1977, and 1978. Dierdorf was selected to the Pro Bowl six times and was inducted into the Pro Football Hall of Fame in 1996.

Larry Little started his NFL career as an unheralded free agent for the San Diego Chargers. He didn’t make many waves there, but when he was traded to the Miami Dolphins in 1969, he really began to prove himself. Little became an integral part of the then-powerhouse offensive line for Miami, which was the line that helped secure their famous 1972 undefeated season. In that year, Little helped the Dolphins rush for 2,960 yards. In the latter part of his career, he struggled with injuries to his knees, ankles, and legs. Nevertheless, in the first 11 of his 14 seasons, he missed only four games.

Who is the best NFL right tackle of all time?

One of the most grueling positional groups in the NFL, the offensive line has seen players with immense talent over the years, and right tackle, in particular, is no different, yet Forrest Gregg still stands among the rest. A seven-time All-Pro and nine-time Pro Bowler, his talent was undeniable. Along with these accolades, he was also named to the NFL 100 All-Time roster and was inducted into the Pro Football Hall of Fame in 1977.

What NFL right tackle has the most Pro Bowl selections all time?

There have been many dominant players in the NFL to start at right tackle and make a name for themselves, but the one player that holds the record for most Pro Bowls is Forrest Gregg. He was named to an astounding nine Pro Bowls as a right tackle over his career from 1956 to 1961, during which he played for the Green Bay Packers and the Dallas Cowboys.

What NFL right tackle has the most All-Pro selections all time?

There is no more accurate estimate of the dominance of a player than the All-Pro selections they have achieved, a sign of true talent and success over a season. In terms of right tackles, Ron Mix has the most All-Pro selections with nine. He achieved this feat as a part of the San Diego Chargers, for whom he played 142 games.